Why Are We Allowing Yemen to Starve?

22 Nov 2018 – Some have dubbed the Yemeni civil war “the forgotten war.” It seems more intentionally ignored.

It is a humanitarian crisis on a mass scale. According to recent reports by United Nations officials as many as 14 million Yemenis are on the verge of dying from starvation. Save the Children, an international humanitarian organization, issued a report documenting some 84,700 children under five years old have starved to death since the US started “helping” Saudi Arabia wage the war in 2015. 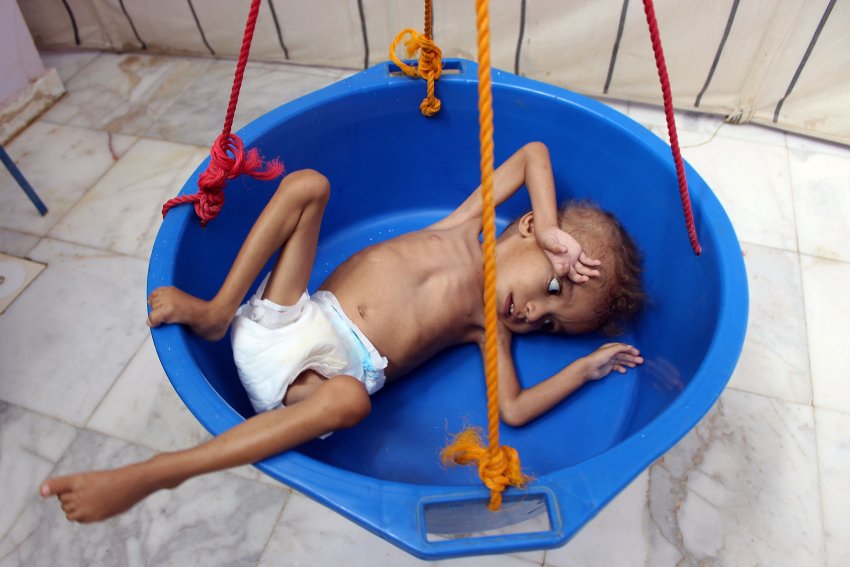 A Yemeni child suffering from severe malnutrition is weighed at a hospital in northwestern Yemen. Aid groups warn that if something isn’t done quickly, as many as 14 million people could be facing famine. Photograph: Khaled Abdullah/Reuters

How can the world simply stand by and let this humanitarian crisis happen? Moreover, what is to be done about it?

Yemen’s latest civil war began in 2015 and has directly killed as many as 56,000 people by bomb and gun, and far more by starvation. The country itself is considered to be the poorest in the Middle East. The war has caused the economy to collapse with the currency almost worthless and no job opportunities. Food is inaccessible.

According to the UN World Food Programme (WFP), more than three million civilians have been displaced since the war commenced. Two-thirds of the 29 million population are food-insecure. This number includes three million children, as well as pregnant women and nursing mothers—all severely malnourished. Since 2016 more than 2,500 civilians have died from a cholera epidemic with at least a million people infected.

Conflicts in and around Yemen originated long before 2015, some claim as far back as the Sunni-Shia conflict which began in the 7th century, but more recent events, from the consequences from British and French colonialism, the outcome of World War I, and the Cold War have all exacerbated inner strife in that poor nation. 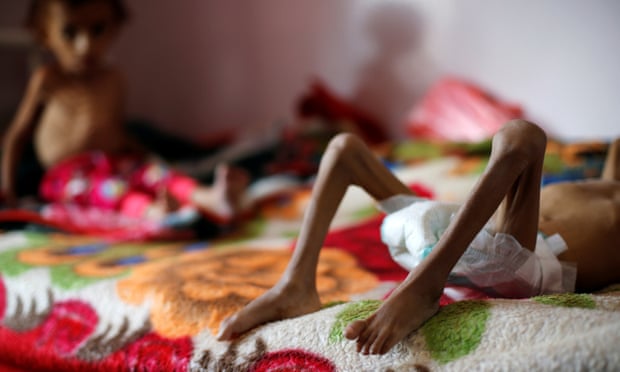 In 1991, Yemen opposed the US-led and as a result Western financial aid for Yemen was cut off. As financial woes plagued Yemen, vice president Ali Salem al Biedh, and former president of PDRY, led an unsuccessful secession effort and civil war to separate from the north in 1994.

In 1997 Al-Quaeda forces called for jihadi insurrection and instability in the east of the country (and along with ISIL still control a third of the country in the east). By 2004 in northern Yemen, Zaidi Shiite rose against the government and called themselves “Houthis” after their assassinated leader, Hussein Badreddin al-Houthi, also known as “Ansar Allah” (“supporters of God”).

Fast forward to 2011 and the “Arab Spring,” when Saleh tried holding on to power but could not. This was a period of massive protests in the streets of Yemen for reform as happened throughout the Middle East and North Africa. Saleh was replaced by Abdrabbuh Mansur Hadi who promised reforms but could not deliver.

The growing frustration and lack of reform in Yemen caused the civil war in 2015 with the Houthis rebelling in the north and garnering more support from the population and from former President Saleh.

The Houthis gained footholds in the west, overtaking the capital of Sana’a, and forcing into exile, President Hadi to Saudi Arabia. As a result, the Gulf Cooperation Council (GCC), Kingdom of Saudi Arabia, United Arab Emirates, Bahrain, Oman, Qatar, and Kuwait, declared the Houthi occupation a coup d’ état while Iran was accused of aiding the Houthi rebellion. 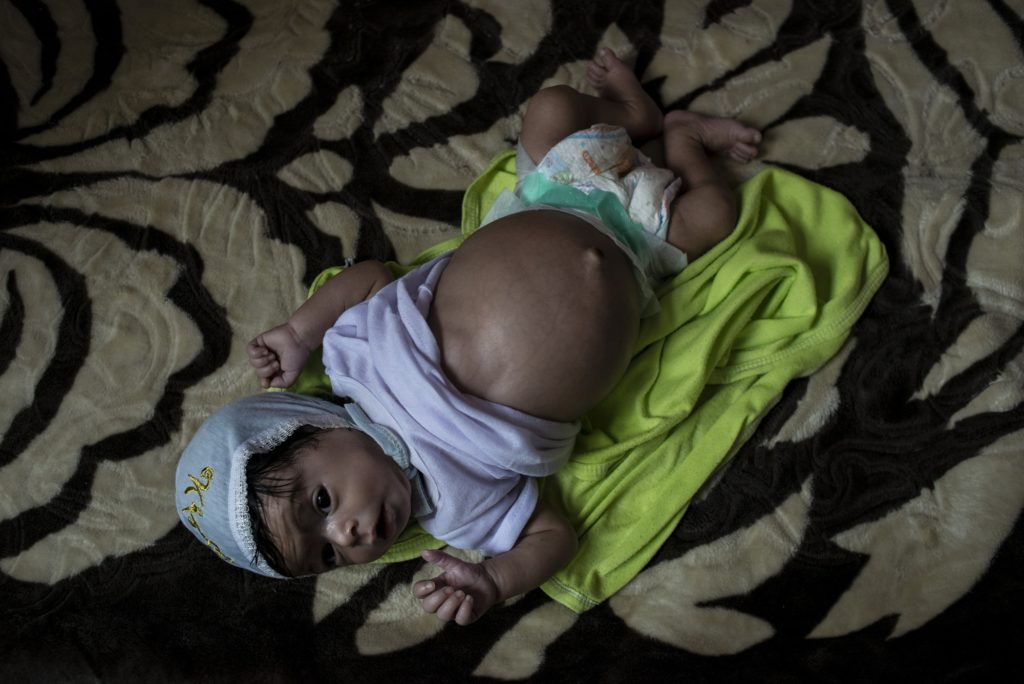 Nine-month-old Bushra lies on a bed, belly bloated from electrolyte imbalance and malnutrition.
Photo: Alex Potter for The Intercept

The Kingdom of Saud formed an international coalition to restore the exiled Hadi government. The coalition is composed of Saudi Arabia, United Arab Emirates, Bahrain, Qatar, Kuwait, Egypt, Jordan, Morocco, Senegal, and Sudan, with logistical support from the United States and Great Britain. This coalition has carried out continuous aerial bombardments against Houthi rebels and civilian infrastructure along with fighting the insurgents through coalition soldiers. In 2017 Saleh was assassinated by the Houthis in part because he tried diplomacy with the Saudis as well as accusations of corruption.

Since Saleh’s death, the civil war has gone from bad to worse for the civilian population with the majority of people in Yemen on the verge of starvation.

The Executive Director of the World Peace Foundation (WPF), anthropologist Alex de Waal, has claimed that recent strategic tactics of warfare have included “mass starvation” from economic blockades and militarily targeting civilian populations and their food production. A major concern is whether or not those responsible for such tactics will be ultimately penalized as no such sanctions currently exist in international law.

A report by anthropologist Martha Mundy cites how coalition forces have been militarily targeting civilian food production in Yemen, especially farmlands and fishing boats. Additionally, economic blockades have been systematically used by the coalition to contain the Houthis, all resulting in mass starvation in Yemen.

This past week, as of November 14th, Kingdom of Saudi Arabia (KAS) coalition forces have put a temporary ceasefire in place to allow critical humanitarian supplies to reach the Yemeni port city of Hodeidah. How long this ceasefire will last is anyone’s guess.

The International Red Cross (IRC) has demanded the following humanitarian measures be taken immediately: combatants must: spare civilians and save civilian infrastructure such as hospitals and schools; avoid civilian zones in combat; allow for free civilian passage away from warfare; allow for the free movement of medicine and food to reach civilian populations; and allow for humanitarian aid to operate within the country.

In sum, all of us—all people across the United States and across the globe—should be very concerned about systematic starvation of civilian populations as a war tactic. This needs to stop. There needs to be accountability for such humanitarian atrocities and there needs to be passage of international law to put an end to these military practices. Otherwise, unnecessary and unfortunate suffering as is happening in Yemen will continue. US support for Saudi Arabia—just reinforced by Trump despite his own CIA concluding that the Crown Prince bin Salman ordered the ghoulish assassination and dismemberment of Washington Post journalist Jamal Khashoggi—is key to the ongoing killing and starvation of Yemeni civilians. Politicians with a conscience are now calling for an end to such aid, including cessation of arms sales to Saudi Arabia. For the children of Yemen, that would be a relief.

J. P. Linstroth is an Adjunct Professor at Barry University. He is author of Marching against Gender Practice: Political Imaginings in the Basqueland (2015).

Anticopyright: Editorials and articles originated on TMS may be freely reprinted, disseminated, translated and used as background material, provided an acknowledgement and link to the source, TMS: Why Are We Allowing Yemen to Starve?, is included. Thank you.

One Response to “Why Are We Allowing Yemen to Starve?”