2018: A Year of Living Dangerously

A multitude of man-made disasters marked 2018 on the Christian calendar. 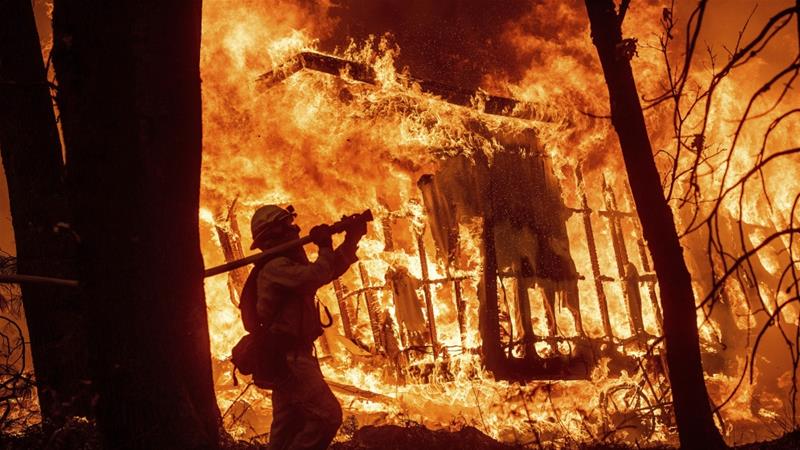 31 Dec 2018 – I was born and raised on three calendars: the Iranian, the Islamic, and the Gregorian. It may sound confusing, but it is actually quite an intriguing exercise which sculpts a contrapuntal disposition into one’s character. Those of us who have gone through such an interstellar experience have the luxury of celebrating birthdays on three different days and sometimes during two different seasons!

The Iranian calendar is solar and every time we say the names of its months and seasons, they sounded like we are reciting an ancient hymn: Farvardin, Ordibehesht, Khordad … and then Bahar, Tabestan, Pa’iz, Zemestan. Pure poetry. The Islamic calendar is lunar and its logic introduces sacred rhetoric into the rhythm of our lives. Muharram we hope for in fear and ecstasy, Ramadan is fun and curious. The Gregorian calendar meanwhile casts a colonial shadow onto our lives. We are effectively ruled by it and have no reason to trust its bizarre circulations.

When I moved to the United States, two other calendars were added to these three: the Chinese and the Jewish. These two calendars hardly mattered inside Iran except for the deeply learned and/or mystical. In the US they became aspects of my life first in Philadelphia, where I went to graduate school, and then eventually in New York, where I work.

Put together, the Iranian, the Islamic, the Jewish, and the Chinese calendars came together and offered me a haven away from the tyranny of the imperial Gregorian calendar.

I remember, when the whole Y2K song-and-dance threatened the end of the world and the coming of apocalypse in the year 2000 on the Christian calendar, I told a reporter this was calendar imperialism and meant nothing to those equally happy within an Iranian, a Jewish, a Chinese, or an Islamic calendar. The reporter thought I was being mystical.

The avalanche of events in 2018 on the Gregorian calendar makes it impossible to pause for a moment and wonder what has happened to us over the past year. But pause we must.

This year, the more obnoxiousness the world leaders displayed, the more attention they demanded. The drama king of the news was, of course, Donald Trump, followed by Vladimir Putin, Xi Jinping, and Narendra Modi; Benjamin Netanyahu and his favourite Arab Prince Mohammed bin Salman (MBS) were not too far behind.

First and foremost in this year of living dangerously were the environmental calamities which capitalist greed and unbridled abuse of our planet have caused. Dire warnings about climate change kept coming at us this past year – including an inferno in Paradise, California and a flood of biblical proportions in Japan.

Scientists have been concerned for decades that the increasing level of greenhouse gases is simply untenable, and yet, Trump remains stubbornly thickheaded. His reaction to the National Climate Assessment Report was dumbfounding: “I don’t believe it,” he said.

Then came the continuing deadly conflicts in the Middle East and Africa. In Yemen, the horrid murderous campaign of Prince Mohammed continues under the patronage of his US, EU, Arab and Israeli allies.

“Some 132 million people in 42 countries will need assistance next year,” the UN says, with Yemen topping the list, along with Syria, Afghanistan and the Central African Republic. Like climate change, this calamity too is caused by unbridled greed, moronic militarism, and sheer indecency.

As a result of conflicts, criminal violence and unbearable poverty caused by extractive neoliberal policies, people across the world continued to flee in 2018. Once again, the US and EU outshined the rest of the world in their cruel border policies. Families were separated and children were held at the US’s southern border, while more than 2,000 died in the Mediterranean Sea, as the EU clamped down on organisations saving people from sinking boats.

As the world’s attention was being drawn to these calamities, Palestinian determination and endurance kept it focused on their particular predicament. For 39 consecutive weeks, Palestinians were protesting near the Israel-Gaza buffer zone as part of the Great March of Return.

Demonstrators, who launched the protests on March 30, are calling for the right of return for Palestinian refugees, under the United Nations Resolution 194, and demanding an end to the 12-year Israeli blockade.

They have done so while suffering casualties under the relentless onslaught of Israeli brutalities. Since the rallies first began, more than 215 Palestinians have been killed and at least 18,000 others injured by Israeli forces.

Arab leaders, meanwhile, from one end to another were busy appeasing Israel and normalising relations with the settler colony.

2018 was also marked by Trump’s decision to withdraw from the Iran Nuclear Deal. His re-imposition of severe economic sanctions on Iranians exacerbated the already dire economic situation in the country, while the ruling Islamists dug in even more belligerently, trying to save their beleaguered regime. Labour unrest and middle-class despair intensified. Millions of human beings braced for even worse to come.

In Europe, the growing instability of the neoliberal EU project was on full display this year with never-ending Brexit drama. The public and parliamentary debates about how or when or whether to do the Brexit and do a soft or a hard Brexit made apparent the complete lack of any working vision for Europe’s political future.

In Russia, Putin ran virtually unopposed and was re-elected for a fourth term; by its end, he will be the country’s longest-serving leader in its modern history. At home, he tightened his grip on power, clamping down on the opposition and boosting the police state. Abroad, his foreign adventures – whether the military campaign in Syria, the poisoning of former Russian spy Sergei Skripal, or the Russian trolling and hacking ventures – have pushed the world to think and talk of another cold war and impose even more painful sanctions.

In China, Xi Jinping kept apace economic expansionism and the cover-up of the criminal persecution of the Uighur people. Trump, meanwhile, triggered a trade war with China and added more economic fuel to the global turmoil his presidency has caused.

In Brazil, a mass fascist frenzy resulted in the election of a nefarious Mussolini wannabe as president. “Fascism has arrived in Brazil,” headlines screamed. “Jair Bolsonaro’s presidency will be worse than you think.” The Israeli warlord Benjamin Netanyahu, of course, rushed to embrace his Brazilian counterpart.

In Sudan, a population brought to brink, came out en masse for another wave of protests against a decades-old regime. As the demands of the demonstrations shifted from socioeconomic changes to the downfall of the regime, President Omar al-Bashir unleashed the deadly force of his security apparatus, which killed dozens of peaceful protesters.

The brutal murder of the Saudi journalist Jamal Khashoggi under the direct command of MBS, however, was perhaps the single most iconic event of this last year. With barbaric brutality, Saudi Arabia abused the diplomatic sanctity of its consulate to murder and butcher one of its own citizens. Trump and his son-in-law Jared Kushner protected the butcher, one out of greed, the other out of commitment to the Zionist cause.

Put all of these atrocities together and we might reconsider the choice of measuring the days of our lives through the Gregorian calendar, on which these horrors have historically marked themselves. Today we remember other calendars and the events of their rhyme and reasoning less consciously, except for communal, denominational, nostalgic, or otherwise purely ritualistic reasons.

If we cannot change the world we live in, we can at least shift the consciousness of our lives we have forgotten. Imagine a world in which Jewish, Islamic, Chinese, Iranian or any other calendar were more meaningful measures of our daily lives in the unique way they arranged the world and our place in the universe.

At the centre of all these calendars is our fragile planet, placed right next to the moon and the sun and all other countless stars. Imagine if we cared for our planet the way all these other calendars were conscious of their heavenly frames of references. Thinking in those cosmic terms – in terms of saintly sages that fathomed these calendars – would certainly teach us humility.

Things are much calmer on all these other calendars where people continue quietly with their pieties, their poetry, their ceremonies of innocence, and their collective memories of time immemorial. Instead of moving to another country or another continent or another clime, sometimes I wish we could all pack our lives and leave this calendar for another. I am not alone in this wish.

“Now the New Year reviving old Desires,
The thoughtful Soul to Solitude retires,
Where the White Hand of Moses on the Bough
Puts out, and Jesus from the Ground suspires.”

It was an 11th-century Muslim poet who wrote that poem. Today we remember Omar Khayyam mostly because of his precious quatrains brought to global attention by his kindred soul, the British poet and translator Edward FitzGerald. But in his own time, Khayyam was best known as a mathematician and astronomer who made enduring contributions to algebra, to the mapping of the wandering stars, and yes, to the calculation of accurate calendars.

There you have it: a poet-astronomer is what our world most lacks and on this New Year’s Eve I send your way – as my sincerest best wishes for many more New Years to come – multiple lunisolar calendars.