A Small Dark Light: The Legacy of the Tao Te Ching and What It Continues to Teach Us about Personal and Political Power 2,500 Years Later

“It is the profound modesty of the language that offers what so many people for so many centuries have found in this book: a pure apprehension of the mystery of which we are part.” 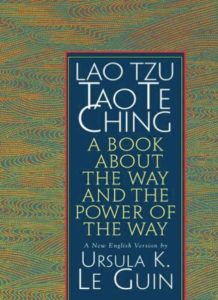 Two and a half millennia ago, the Chinese sage Lao Tzu wrote a poetic and profound short text known as the Tao Te Ching. With uncommon elegance, it crystallized the teachings of Taoist philosophy on such perennial matters as power, happiness, and the source of meaning in human life. As its wisdom radiated West over the centuries, it went on to influence minds as varied as John Cage (who wove it into his pioneering musical aesthetic), Franz Kafka (who considered it the clearest view of reality), Bruce Lee (who anchored his famous metaphor for resilience in it), Alan Watts (who placed it at the center of his philosophy), and Leo Tolstoy (who leaned on it in his proto-blog about the meaning of life). One changeless constant has endured across the millennia: Every generation of admirers has felt, and continues to feel, a prescience in these ancient teachings so astonishing that they appear to have been written for their own time.

Among the timeless text’s most ardent admirers is Ursula K. Le Guin (b. October 21, 1929), who first became besotted with it as a little girl, watching her father leaf through and lovingly annotate a scrumptious cloth-bound copy of Paul Carus’s 1898 translation. Le Guin soon came to discover that this “venerable object of mystery” held enchantments deeper than the beguiling blue-and-red Chinese designs gracing its cover — upon asking her father why he was taking notes, she was told that he was marking the chapters he wanted read at his funeral. (They were read.) 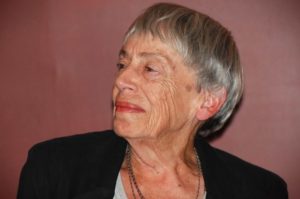 “I was lucky to discover him so young, so that I could live with his book my whole life long,” Le Guin recalls. By the time she was in her twenties, having lived with the book and having seen the book live through her, she set out to give voice to that silent mutuality. Although she spoke no Chinese, Le Guin decided to create her own translation — or, rather, lyrical interpretation — using Carus’s 1898 translation, which included a transliteration of each Chinese character, as a sort of Rosetta Stone to decipher the poetic grammar of the ancient text against the scholarly English translations.

In her twenties, Le Guin completed several chapters, then went on adding slowly each decade. Nearly half a century later, as she was inching toward seventy, she gave this private passion public form in Lao Tzu: Tao Te Ching (public library) — a book Le Guin describes as “a rendition, not a translation.” Similar in nature to Proust’s far-more-than-translation of Ruskin, it is indeed the type of work which the great Polish poet and Nobel laureate Wisława Szymborska meant when she spoke of “that rare miracle when a translation stops being a translation and becomes … a second original.”

Le Guin writes of the ethos animating her version:

The Tao Te Ching was probably written about twenty-five hundred years ago, perhaps by a man called Lao Tzu, who may have lived at about the same time as Confucius. Nothing about it is certain except that it’s Chinese, and very old, and speaks to people everywhere as if it had been written yesterday.

The Tao Te Ching is partly in prose, partly in verse; but as we define poetry now, not by rhyme and meter but as a patterned intensity of language, the whole thing is poetry. I wanted to catch that poetry, its terse, strange beauty. Most translations have caught meanings in their net, but prosily, letting the beauty slip through. And in poetry, beauty is no ornament; it is the meaning. It is the truth.

Le Guin being Le Guin — a writer whose incisive intellect continually slices through our limiting societal structures and whose essay on being “a man” remains the finest, sharpest thing ever written about gender in language — she notes the deliberate countercultural undertone of her rendition:

Scholarly translations of the Tao Te Ching as a manual for rulers use a vocabulary that emphasizes the uniqueness of the Taoist “sage,” his masculinity, his authority. This language is perpetuated, and degraded, in most popular versions. I wanted a Book of the Way accessible to a present-day, unwise, unpowerful, and perhaps unmale reader, not seeking esoteric secrets, but listening for a voice that speaks to the soul. I would like that reader to see why people have loved the book for twenty-five hundred years.

It is the most lovable of all the great religious texts, funny, keen, kind, modest, indestructibly outrageous, and inexhaustibly refreshing. Of all the deep springs, this is the purest water. To me, it is also the deepest spring.

And so, with equal parts reverence and imaginative rigor, Le Guin plunges into the spring. Most of the chapters, each sculpted into poetic profundity that enlarges the beauty and truth of Lao Tzu’s wisdom, are footnoted with Le Guin’s illuminations, which reveal, and often add to, the original depth. Of the first, she notes:

A satisfactory translation of this chapter is, I believe, perfectly impossible. It contains the book. I think of it as the Aleph, in Borges’s story: if you see it rightly, it contains everything.

And so she presents the first chapter-poem, which she titles “Taoing”:

Heaven and earth
begin in the unnamed:
name’s the mother
of the ten thousand things.

Two things, one origin,
but different in name,
whose identity is mystery.
Mystery of all mysteries!
The door to the hidden.

In a sentiment that calls to mind Susan Sontag’s abiding admonition against interpretation, Le Guin writes:

Everything Lao Tzu says is elusive. The temptation is to grasp at something tangible in the endlessly deceptive simplicity of the words… It is the profound modesty of the language that offers what so many people for so many centuries have found in this book: a pure apprehension of the mystery of which we are part.

Among Lao Tzu’s elusive truths are counterintuitive notions like “useful emptiness,” “dim brightness,” and the Chinese concept of wu wei, trying not to try, many of which revolve around the question of what power really means. The tenth chapter, which Le Guin titles “Techniques,” explores the path to attaining these paradoxical powers:

Can you keep the deep water still and clear,
so it reflects without blurring?
Can you love people and run things,
and do so by not doing?

Opening, closing the Gate of Heaven,
can you be like a bird with her nestlings?
Piercing bright through the cosmos,
can you know by not knowing?

To give birth, to nourish,
to bear and not to own,
to act and not lay claim,
to lead and not to rule:
this is mysterious power. 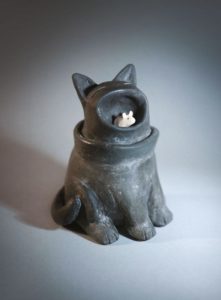 Taoists gain their ends without the use of means. That is indeed a light that does not shine—an idea that must be pondered and brooded over. A small dark light.

One of Lao Tzu’s most timeless teachings is also, today, one of the timeliest — his ideas about the true source of political power. Le Guin explains:

Autocracy and oligarchy foster the beliefs that power is gained magically and retained by sacrifice, and that powerful people are genuinely superior to the powerless.

He sees sacrifice of self or others as a corruption of power, and power as available to anybody who follows the Way. This is a radically subversive attitude. No wonder anarchists and Taoists make good friends.

People who treated the body politic
as gently as their own body
would be worthy to govern the commonwealth.

Tucked into Lao Tzu’s millennia-old verses are observations that apply with remarkable precision to certain public figures and political actors of our own time, nowhere more acutely than in the civilizational embarrassment who signs himself Donald Trump. In the twenty-fourth chapter, for instance, Lao Tzu writes:

Self-satisfied people do no good,
self-promoters never grow up.

The fifty-sixth, in which Le Guin deliberately drops “he” from the grammatically familiar “he who,” contains one of his most famous tenets:

In the thirty-third, which Le Guin titles “Kinds of Power,” Lao Tzu writes:

Knowing other people is intelligence,
knowing yourself is wisdom.
Overcoming others takes strength,
overcoming yourself takes greatness. 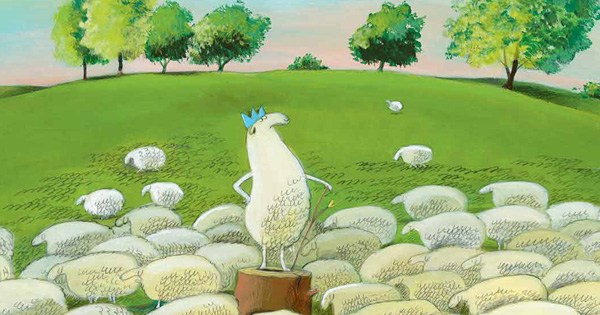 Art by Olivier Tallec from Louis I, King of the Sheep, an illustrated parable of how power changes us.

The thirty-eighth chapter deals directly with the subject of true power and its simulacra:

The good the truly good do
has no end in view.
The right the very righteous do
has an end in view.
And those who act in true obedience to law
roll up their sleeves
and make the disobedient obey.

Obedience to law is the dry husk
of loyalty and good faith.
Opinion is the barren flower of the Way,
the beginning of ignorance.

So great-minded people
abide in the kernel not the husk,
in the fruit not the flower,
letting the one go, keeping the other.

A vast, dense argument in a minimum of words, this poem lays out the Taoist values in steeply descending order: the Way and its power; goodness (humane feeling); righteousness (morality); and — a very distant last — obedience (law and order). The word I render as “opinion” can be read as “knowing too soon”: the mind obeying orders, judging before the evidence is in, closed to fruitful perception and learning.

The whole of Lao Tzu: Tao Te Ching is well worth savoring — as much for the ancient substance as for Le Guin’s stylistic splendor. Complement it with Le Guin on power, oppression, and freedom, the magic of real human conversation, the sacredness of public libraries, what beauty really means, and where good ideas come from.

One Response to “A Small Dark Light: The Legacy of the Tao Te Ching and What It Continues to Teach Us about Personal and Political Power 2,500 Years Later”