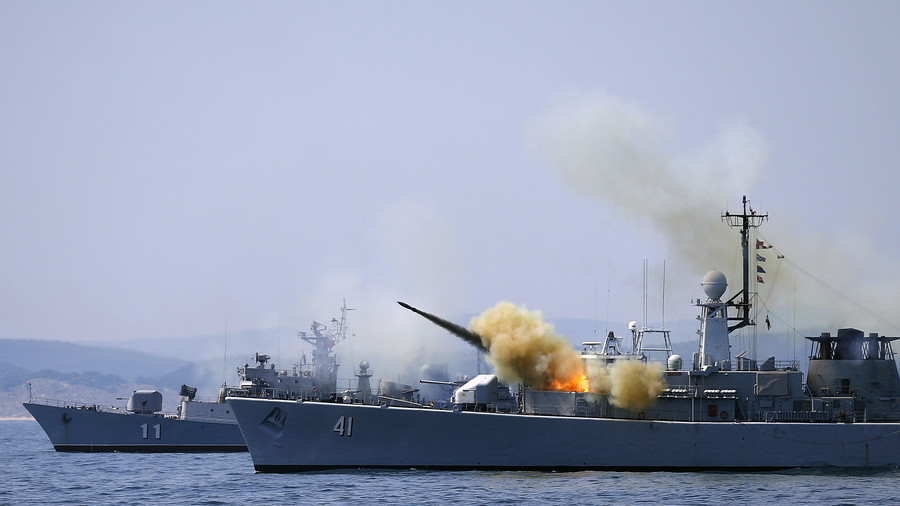 A missile launched from the Bulgarian navy frigate “Drazki” during BREEZE 2014 military drill in the Black Sea. © Reuters / Stoyan Nenov

26 Nov 2018 – A new Crimean War would be the last, but few amongst the general public realize that endless baiting of Russia, the cycle of war games, sanctions, and false accusations could well lead to all-out war between NATO and Russia.

The last time Britain fought Russia, we were the most powerful empire in the history of the world and our adversary a ramshackle obscurantist autocracy. The British suffered over forty thousand dead and wounded. It was the first modern war – red in tooth and claw – predating the American Civil War, which is often awarded that dubious honor. The terrible suffering of the British (and French) soldiers, virtually none of whom even had the right to vote for the parliament which ruled “their” empire, began to be unpopular at home. Tennyson’s braggadocio ballad “The Charge of the Light Brigade” gave rise to the first whispers of doubt amongst British people generally as to whether our soldiers were lions led by donkeys, into one valley of death after another. Theirs not to reason why, theirs but to do and die.

The next Crimean War would be the last war and no poet would be left alive to chronicle it for the remaining cockroaches, the only beings which would likely survive it.

Surprisingly, few amongst the general public had yet to wake up to the fact that the endless baiting of Russia, the cycle of war-games sanctions and false accusations could well lead to all-out war between NATO and the Russian Federation – multiple nuclear-armed superpowers, ramshackle no longer. Events this week in the Russian waters off Crimea and the subsequent war-mobilization of the Ukrainian neo-fascist government may well prove a wake-up call.

Ukrainian coup-president Poroshenko, with his country mired in debts and his presidency hanging by a thread trailing miles behind his main rival, has decided on the “Wag the Dog” manoeuvre – look over there he cries as he mounts the most serious provocation yet by sailing military and other ships into Russian territorial waters with the inevitable Russian response.

Invoking martial law, he may even cancel the forthcoming presidential poll and will certainly fundamentally change the political landscape through draconian legislation, including closing down opposition using the actually fascist militias in Ukraine as his shock troops.

Predictably he has called upon his allies in NATO to come to the aid of his beleaguered regime, beggared by his own recklessness. Trump – facing imminent Armageddon in Washington as the Mueller Enquiry closes – may welcome the opportunity to wag his own Dog. Theresa May – possibly in the last days of her premiership otherwise – ditto. Macron, the streets of his capital on fire with 77% of his people favoring the arsonists rather than him, likewise.

A dangerous constellation of weak, collapsing Western governments and leaders suddenly find their interests coinciding with the tin-pot tyrant Poroshenko. And into the Valley of Death they might just be ready to send their people charging. If they do they will find a resolute Russia far stronger than at Balaclava. Strong and united enough in fact to prevail. Unity in NATO countries is something even the Victorian master propagandist Tennyson would find it hard to spin. And certainly the moth-eaten second-rate spin-doctors of the NATO hirelings – the laughably named “Integrity” unmasked by Anonymous last week – “ain’t no Lord Tennyson, bruv.”