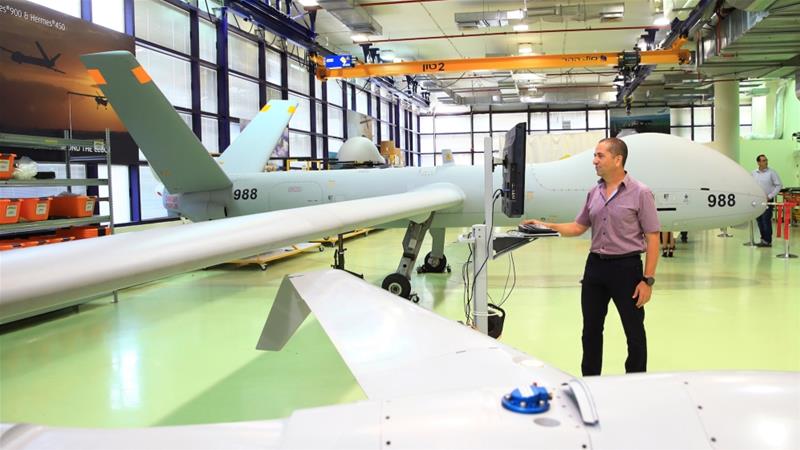 An employee stands next to an Elbit Systems Hermes 900 UAV at the company’s drone factory in Rehovot, Israel on June 28, 2018. [File: Orel Cohen/Reuters]

21 Dec 2018 – Earlier this month, an intergovernmental conference in Marrakesh, Morocco brought together leaders from around the world to address global migration. After two days of deliberations, some 150 nations signed the Global Compact for Migration (GCM) agreement, which called for the implementation of more humane policies to ensure “safe, orderly and regular migration”.

But the conference and the agreement were very much a platform for Western doublespeak and hypocrisy. European countries and the United States are by far not concerned with the “safety” of migrants and refugees heading for their borders.

In fact, the border security industry in Europe and the US is thriving and in both places, Israel with its infamous militarised security policies is serving as a role model and a major technology supplier. It is therefore no surprise that European and US border control mechanisms are increasingly becoming as brutal and inhumane as Israel’s.

In the case of Europe, it makes no difference that some of its leaders have made meek attempts at criticising Israel’s use of disproportionate force against Palestinians and its devastating siege on Gaza, which has been in place for almost 12 years. All the same, Europe is increasingly becoming one of the main markets for Israeli war and security technology – the same one tried, tested and used against Palestinians and migrants and refugees trying to reach Israeli borders.

In fact, Europe, and especially its rising far-right powers, have increasingly adopted Israel’s way of dealing with “inconvenient” populations.

“We have a duty to protect our borders against illegal infiltrators,” said Israeli Prime Minister Benjamin Netanyahu in a recent statement to the press. “That’s what we’ve done, and that’s what we will continue to do.”

It is common knowledge that Israel is a state that discriminates against the indigenous Palestinian population based on race and religion. In recent years, a flow of African migrants and refugees, who try to seek asylum in Israel through the Sinai border, has added yet a new component to Israeli racism, one that is based on colour.

In March this year, the Sephardic Chief Rabbi of Israel called black people “monkeys”, using the Hebrew equivalent of the “n-word” during his weekly sermon. Netanyahu, along with other Israeli officials, has joined the racist tirade on many occasions. “The ‘flood’ of migrants from Africa is ‘much worse’ than acts of terrorism emanating from Sinai,” he said.

This racist discourse is increasingly finding its match among the European far right.

“La pacchia e’ finita!” (The party is over) is a recurring slogan used by Italian Interior Minister Matteo Salvini to convey the totally misleading notion that sees refugees as people who want to “live off” the Italian people. Members of Salvini’s La Lega party have repeatedly and shamelessly dubbed Italy’s first African-Italian minister, Cecile Kienge a “monkey”, and “prostitute”, horrific words in an ever-growing racist vocabulary used by the country’s far-right parties.

It was no surprise, then, to find Salvini, the rising star of what can be considered Italy‘s neo-fascist movement, a welcome guest in Israel.

In his first visit to Tel Aviv in March 2016, where he attempted to whitewash his reputation of racism and anti-Semitism – which has been historically associated with Italy’s far right – Salvini commended Israel as “the perfect balance of different realities, while ensuring law and order. It surely is a role model for security and anti-terrorism policies.”

In June this year, Salvini became Italy’s new interior minister and, arguably, the most powerful politician in the country. Thus, when he returned to Israel earlier this month, his “friendship” with Netanyahu was a source of pride for both of them.

His trip to Israel came right after the Marrakesh conference, where both countries also joined efforts to resist policies that work towards “safe” and dignified migration.

The Israeli government did not miss the opportunity to show off its border security to Salvini. He was taken on a tour of the border with Lebanon, where – according to his tweet – “Islamic terrorists are digging tunnels and setting up missiles to attack Israel”.

The tour was no coincidence. Italy is one of several European countries that are keenly interested in Israel’s border security technologies and strategies and are pushing for their adoption on the European Union level.

The European Border and Coast Guard Agency (FRONTEX) has been at the forefront of employing military technology for civilian purposes, despite the obvious implications of such a policy on the erosion of civil liberties and fundamental human rights.

Unfortunately, the European debate on this issue has been settled in favour of the “security” enthusiasts. Just a few years ago, the discussion on the possibility of using drones to control migration and refugee routes took centre-stage in European media and political circles.

At the time, many argued that such technology could infringe on fundamental rights, such as privacy, right to seek asylum – which is protected under international law – freedom of movement, and so on.

Today, the deployment of military drones is a matter of course, as the national security discourse has prevailed in the public sphere, thanks to fear-mongering and divisive politics.

In 2009, the European market for border control security was estimated at between 6 and 8 billion euros ($7-9bn). Today, this market is estimated to reach 50 billion euros globally ($57bn) by 2022, a large chunk of it being claimed by European spending.

Israel, as a country well-versed in manipulating the term “security”, is poised to benefit immensely from this development. It is already skillfully exploiting the security-obsessed European mindset in order to expand its military market outreach.

Israel is the seventh largest arms exporter in the world, and is emerging as a leader in the global export of aerial drones.

The Israeli brand is particularly popular because its technology is “combat-proven”. Indeed, the Israeli military has had ample opportunity to test its diverse weapons and security cache against Palestinian civilians.

Earlier this year, Israeli military company Elbit won a two-year $68m contract with the EU to provide maritime unmanned aircraft system (UAS) services. It will deploy and operate its Hermes 900 Maritime Patrol system, the same one which was used during the bloody Israeli assault on Gaza in 2014. The Israeli military praised the UAS as “phenomenal” and “a real asset” in the war, which killed 2,250 Palestinians, including more than 500 children.

FRONTEX has already contracted the Israel Aircraft Industries (IAI) for the use of its Airbus Maritime Heron Remotely Piloted Aircraft System (RPAS) in daily security and coastal guard missions. This technology was also used in Israel’s assault on Gaza in 2014. FRONTEX is paying IAI 4.75 million euro ($5.57m). It has also concluded a contract with Italian part-state-owned defence company Leonardo (formerly Finmeccanica) for its Falco technology for 1.7 million euro ($2m).

It is ironic – and quite telling – that these companies that are feeding weapons to the Middle East and its conflicts are the same ones that are earning massive income from selling technologies used to stave off people fleeing these same conflicts.

While such businesses are aiding the systematic destruction of entire Middle Eastern countries, they are also contributing towards the increasingly popular idea that “Fortress Europe” needs militarised protection.

What is enabling the Israeli-EU cooperation and empowering Israel as “Europe’s protector” is the congruence between the far-right pro-Israel political discourse and the far-right populist movements that are plaguing Europe.

On December 16, just days following the Morocco conference on migration, thousands of far-right activists protested in Brussels against the GCM. The protest, named the “March against Marrakesh”, turned violent as angry anti-refugee protesters clashed with police.

Alas, the Brussels clashes represent the new face of Europe: intolerant, gripped by fear and vulnerable to racist and far-right ideas.

While the new political environment will not bode well for Europe’s future, it is a reality that suits Israel only too well, not only because it is consistent with its anti-migrant, anti-Muslim agenda, but also because it is a splendid opportunity to expand the market of its “combat-tested” weapons.

Romana Rubeo is a freelance writer and translator based in Italy.