Continued Debate over the Crime of Aggression: A Supreme International Irony

“The common sense of mankind demands that law shall not stop with the punishment of petty crimes by little people. It must also reach men who possess themselves of great power and make deliberate and concerted use of it to set in motion evils which leave no home in the world untouched.”
— Robert Jackson, 21 November 1945[1]

With these words, the Chief of Counsel for the United States opened the case for the Prosecution at the International Military Tribunal at Nuremberg (IMT). The IMT’s ground-breaking judgment of October 1, 1946 held Nazi leaders personally to account for war crimes, crimes against humanity, and crimes against peace—and indelibly branded aggression as “the supreme international crime.”[2]

Within days of the verdict, Robert Jackson reported to the President of the United States that “[n]o one can hereafter deny or fail to know that the principles on which the Nazi leaders are adjudged to forfeit their lives constitute law and law with a sanction.”[3] Yet, despite such ardent pronouncements, the IMT was a court of limited jurisdiction and, without broader global endorsement, its judgment might have fallen short of commanding universal recognition as binding law. For this reason, the United States advanced its consideration by the United Nations, where, on December 11, 1946, the General Assembly unanimously affirmed the principles of the Nuremberg Charter and judgment and directed that work begin on formulating these principles within an international criminal code.[4] Such affirmation has been cited by both courts and commentators as having stamped the judgment with the expected imprimatur of customary international law.[5] 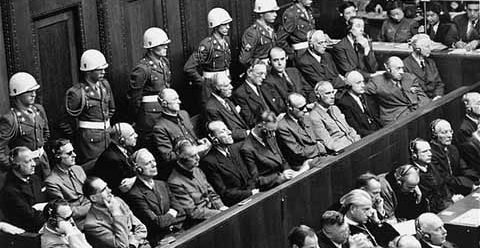 Notwithstanding the fact that it took the U.N. only seventy-one days to affirm aggression as a customary law offense, today, almost seventy-one years later, it remains a crime in legal limbo. Though the International Criminal Court (ICC) is technically vested with jurisdiction over the crime of aggression, it is, as yet, powerless to exercise such jurisdiction.[6] But that may soon change.

In 2010, at an ICC Review Conference held in Kampala, Uganda, amendments to the Rome Statute were adopted by consensus which could allow the Court’s aggression jurisdiction to be activated as early as 2017.[7] Ironically, those most responsible for having elevated the crime to its current status within customary international law are in no rush to see that happen.[8]

At Nuremberg, it was the United States that pressed for including aggressive war-making as an indictable offense.[9] The Charter defined “crimes against peace” as the “planning, preparation, initiation or waging of a war of aggression, or a war in violation of international treaties, agreements or assurances, or participation in a Common Plan or Conspiracy for the accomplishment of any of the foregoing.”[10] It went on to specify that “[l]leaders, organizers, instigators and accomplices participating in the formulation or execution of a Common Plan or Conspiracy to commit any of the foregoing crimes are responsible for all acts performed by any persons in execution of such plan.”[11]

The acts specified in paragraph 2 of Article 8 bis of the Rome Statute are identical to those set forth in Article 3 of the Definition of Aggression adopted in General Assembly Resolution 3314 in 1974.[14] As to the character of the prohibition of conduct proscribed by Article 3 of the 1974 definition (relating to “the sending”. . . of armed bands, groups, irregulars or mercenaries”),[15] the International Court of Justice opined in 1986 that such prohibition “may be taken to reflect customary international law.”[16] This characterization was made outside the scope of a criminal prosecution, but it is, nonetheless, of interest with respect to the question of whether the Rome Statute’s aggression provisions parallel those of customary international law. Yet it is a question which, in the end, may be relatively academic: Any prosecution before the ICC will necessarily rely primarily on the authority of the Rome Statute itself, rather than on principles of universal jurisdiction or of customary law.[17]

In Kampala, the Assembly of States Parties resolved by consensus “to activate the Court’s jurisdiction over the crime of aggression as early as possible.”[18] Now, in 2017, the parties are finally in a position to do so.[19] Whether their stated resolve was based in rhetoric or in reality should soon be fairly obvious.

[2] See 22 Trial of the Major War Criminals Before the International Military Tribunal 427 (1948) (“To initiate a war of aggression, therefore, is not only an international crime; it is the supreme international crime differing only from other war crimes in that it contains within itself the accumulated evil of the whole.”).

[5] See, e.g., Ian Brownlie, Principles of Public International Law 566 (5th ed., 1998) (“[W]hatever the state of the law in 1945, Article 6 of the Nuremberg Charter has since come to represent general international law.”). See also R v. Jones, [2006] UKHL 16 [12]–[18] (Eng.) (holding that the crime of aggression exists in customary international law, essentially unchanged since Nuremberg, and citing Brownlie); Attorney Gen. of the Gov’t of Isr. v. Eichmann, 36 I. L. R. 277 (Sup. Ct. 1962) (“[I]f there was any doubt as to this appraisal of the Nuremberg Principles as principles that have formed part of customary international law ‘since time immemorial,’ such doubt has been removed by two international documents”; citing G.A. Res. 95(I) and Res. 96).

[6] The Rome Statute of the International Criminal Court (hereinafter the “Rome Statute” or the “Statute”) provided that the Court (established in 2002) may not “exercise jurisdiction over the crime of aggression” until after “a provision is adopted . . . defining the crime and setting out the conditions under which the court may exercise such jurisdiction.” Rome Statute of the International Criminal Court art. 5, July 17, 1988, 2187 U.N.T.S. 90, (entered into force July 1, 2002), rev. 2010 [hereinafter Rome Statute].

[7] The Kampala amendments provide that activation of the Court’s aggression jurisdiction will occur after at least thirty States have ratified them and they have been re-approved by the ICC’s Assembly of States Parties (ASP) at some time after January 1, 2017. Rome Statute, supra note 6, arts. 8 bis, 15 bis, 15 ter. See also Jutta F. Bertram-Nothnagel, A Seed for World Peace Planted in Africa: The Provisions on the Crime of Aggression Adopted at the Kampala Review Conference for the Rome Statute of the International Criminal Court, Africa Legal Aid Q., http://www.africalegalaid.com/wp-content/uploads/2017/02/The_Provisions_on_the_Crime_of_Aggression_Adopted_at_the_Kampala_Review_Conference_for_the_Rome_Statute_of_the_International_Criminal_Court.pdf.

[8] See, e.g., Harold Hongju Koh & Todd F. Buchwald, The Crime of Aggression: The United States Perspective, 109 Am. J. Int’l L. 257 (2015). For a critique of the U.S. policy, see Donald M. Ferencz, Current U.S. Policy on the Crime of Aggression: History in the Unmaking?, 48 Case W. Res. J. Int’l L. 189 (2016). Leading up to the Kampala Review Conference, all five permanent members of the Security Council expressed a clear preference to see the Council, where they each have the veto power, have exclusive control over determinations relating to the crime of aggression. See, e.g., id.

[9] The Nuremberg Charter was appended to the London Agreement of 8 August 1945, signed by representatives of the United States, France, the U.K., and the Soviet Union. It is the foundational document authorizing the trial of Nazi criminals at Nuremberg. See 1 Trial of the Major War Criminals Before the International Military Tribunal, Nuremberg 10–18 (1947). For a detailed account of the paramount role of the United States in advancing crimes against peace, see J.A. Bush, “The Supreme . . . Crime” and Its Origins: The Lost Legislative History of the Crime of Aggressive War, 102 Colum. L. Rev. 2324 (2002). See also Kirsten Sellars, “Crimes against Peace” and International Law (2013).

[11] Ibid. By contrast, the Rome Statute limits the scope to acts by “a person in a position effectively to exercise control over or to direct the political or military action of a State.” See Rome Statute, supra note 6, art. 8 bis(1). For a comparison of the Nuremberg and ICC leadership standards, see Kevin Jon Heller, Retreat from Nuremberg: The Leadership Requirement in the Crime of Aggression, 18 Eur. J. Int’l L. 477 (2007).

[17] It should be noted, however, that while article 21 of the Rome Statute requires that the Court primarily apply the Statute, the Elements of Crimes, and its own Rules of Procedure and Evidence, it may also, “where appropriate,” consider secondary sources of law, including principles of both international and national laws.

[19] Since thirty State Parties have already ratified the amendments, all that remains for their activation is their re-approval by the ASP. See Rome Statute, supra note 6.