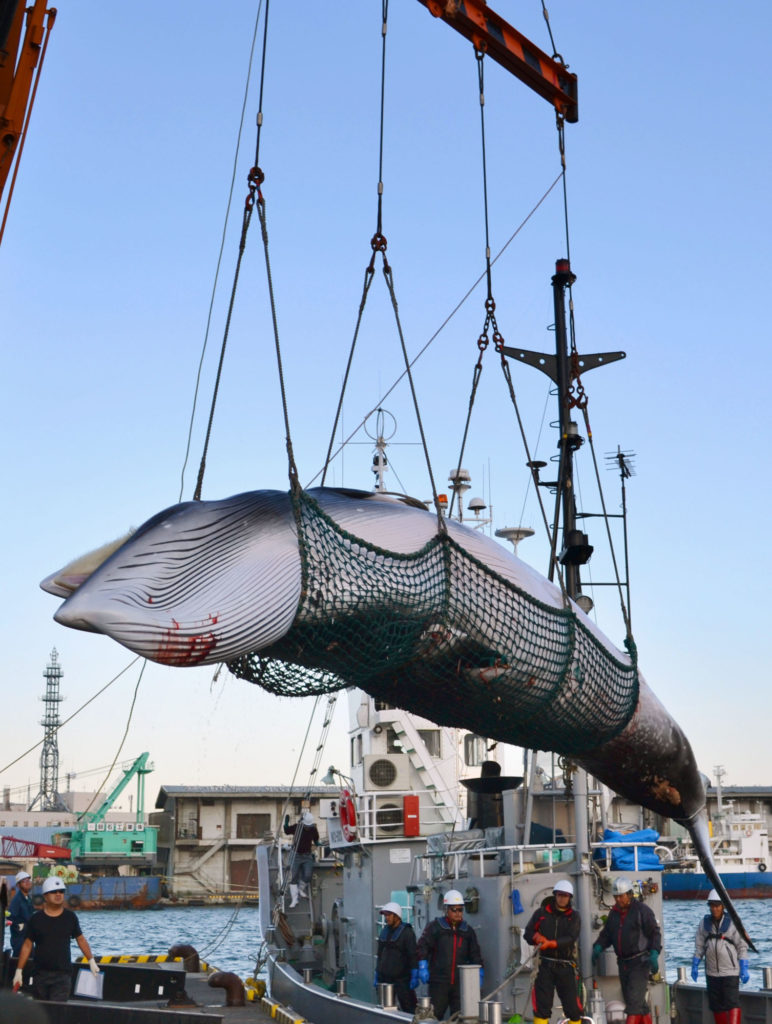 A minke whale is hauled ashore at the port of Kushiro in Hokkaido in September 2017.
| KYODO

20 Dec 2018 – Japan has decided to withdraw from the International Whaling Commission in a bid to resume commercial whaling for the first time in 30 years, government sources said today.

However, Japanese whalers are unlikely to catch the mammals in the Antarctic Ocean even after it quits the IWC as the government is considering allowing commercial whalers to operate only in seas near Japan and in its exclusive economic zone, the sources added.

The decision, which will be announced by the end of this year, comes as pro- and anti-whaling members of the IWC have been stuck in decades of confrontation.

Japan’s pullout, currently planned for next year, could spark criticism from European and other countries opposed to the practice of whaling. It is extremely rare for Japan to withdraw from an international organization.

Its rationale could be also questioned as it is a member of the U.N. Convention on the Law of the Sea that calls for the use and conservation of marine resources via international organizations.

In order to leave the IWC next year, Japan needs to notify the commission by Jan. 1.

Reports of the envisioned withdrawal drew a rebuke from environmental groups. Greenpeace urged the government to reconsider the decision that the non-governmental organization called a “grave mistake.”

“This snub to multilateralism is unacceptable,” said Sam Annesley, executive director at Greenpeace Japan. “We hope that Japan will reverse its decision and take its place beside the nations trying to undo the damage human activities have done to whale populations.”

The nation’s attempts over the last 30 years to resume commercial whaling of relatively abundant species such as minke whales have always been stymied by countries such as Australia and New Zealand.

Most recently, its proposal to ease the IWC’s decision-making rules was also voted down in an annual meeting in September, and Tokyo issued a veiled warning of a potential pullout.

While Japan halted commercial whaling in 1988, in line with a moratorium adopted in 1982 by the IWC, it has hunted whales since 1987 for what it calls “scientific research.” But this has been criticized internationally as a cover for a commercial hunt.

Japan cannot continue its research whaling in the Antarctic Ocean if it pulls out of the IWC. Of the member countries, 41 are for whaling and 48 are against it, according to the Fisheries Agency.

Under IWC rules, a withdrawal decision becomes effective, in principle, on June 30 following notification to the commission by the previous Jan. 1.

Government officials say Japan will explain its stance and seek understanding from other countries.

“There are fishermen in Japan making their living by whaling and we can’t simply end it,” one of the officials said.

Japan also suggested in 2007 that it might withdraw from the IWC in protest at the ban on commercial whaling, but it was later persuaded by the United States and other countries to remain in the organization.

Japan joined the IWC in 1951. The entity was established in 1948 under the International Convention for the Regulation of Whaling to conserve whales and realize the “orderly development of the whaling industry.”