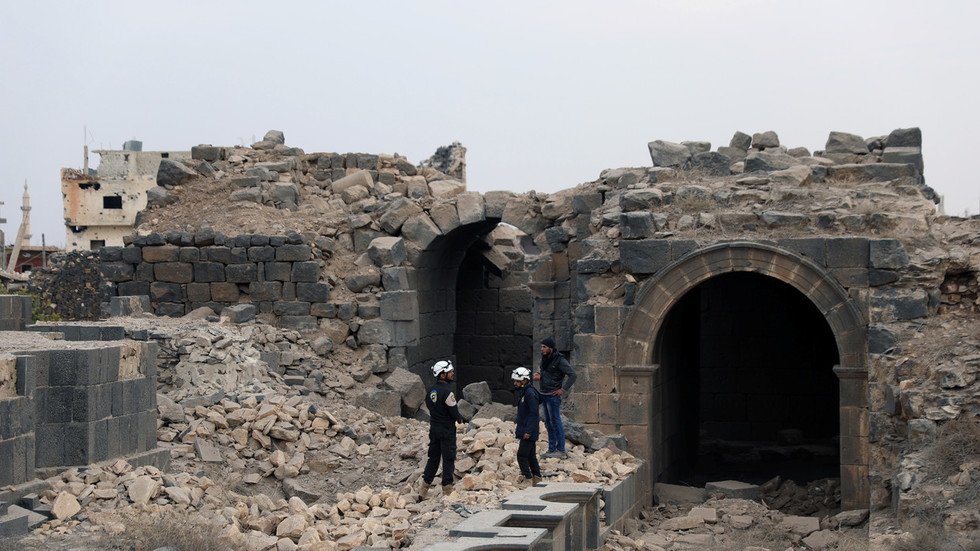 25 Dec 2018 – Utter silence. That is the sound of Western corporate media days after a more than one-hour-long panel on the White Helmets at the United Nations on December 20.

Journalists were present, so the silence isn’t due to lack of access. And in any case it was live streamed on the UNTV channel, and remains available on Youtube for keen observers to watch.

More likely, the silence is due to the irrefutable documentation presented on the faux-rescue group’s involvement in criminal activities, which include organ theft, working with terrorists — including as snipers — staging fake rescues, thieving from civilians, and other non-rescuer behaviour.

On the panel was one of corporate media’s favourite targets to smear, British journalist Vanessa Beeley, who gave a fact-based lecture on her years of research into the founding, funding and nefarious activities of the White Helmets, research which includes numerous visits to White Helmets centers, countless testimonies from Syrian civilians, and even an interview with a White Helmets leader in Dara’a al-Balad, Syria.

Maxim Grigoriev, the director of the Foundation for the Study of Democracy (a member of the UN’s Global Counter-Terrorism Research Network) spoke at length, detailing some of the over 100 eyewitnesses his foundation has conducted interviews with.

These include over 40 White Helmets members, 15 former terrorists, 50 people from areas where terrorists and WH operated, with another over 500 interviewed by survey in Aleppo and Daraa.

Among testimonies presented by Grigoriev were numerous accounts of the White Helmets’ involvement in organ theft.

A head of nursing in Aleppo is cited as seeing the body of his neighbour who had been taken by the White Helmets to Turkey for “treatment”. “I lifted the sheet and saw a large wound cut from the throat to the stomach… I touched him with my hand and understood there were clearly no organs left.”

Another interviewee said: “A person receives a minor injury, is rescued… and then brought back with their stomach cut open and with their internal organs missing.”

The interviews with civilians, White Helmets and terrorist members themselves put to rest NATO’s and their lapdog media’s explanations that in the White Helmets there are a few bad apples but in general these are humanitarian rescuers.

For example, a Syrian civilian, Omar al-Mustafa, is cited as stating:

“Almost all people who worked in nearby White Helmets centers were al-Nusra fighter or were linked to them. I tried to join the White Helmets myself, but I was told that if I was not from al-Nusra, they could not employ me.”

“I saw them (White Helmets) bring children who were alive, put them on the floor as if they had died in a chemical attack.”

The testimonies incriminate not only the White Helmets organization, but also the doctors who, in 2016, Western corporate media fawned over.

According to one interviewee, Mohamed Bashir Biram, his attempt to take his father to a White Helmets affiliated al-Bayan hospital, failed. He said: “Since my father was not a fighter, the doctors in the hospital refused to help him and he died.”

But in 2016, the Western media was praising the same valiant doctors, in their crescendo of war propaganda around Aleppo.

Many other independent journalists have corroborated aspects of what the panelists — also comprising Syrian journalist Rafiq Lotef, and Russian and Syrian Representatives to the UN, Ambassadors Vassily Nebenzia and Bashar al-Ja’afari — described in detail.

In my own visits to eastern Ghouta towns last April and May, residents likewise spoke of organ theft, staged rescues, the White Helmets working with Jaysh al-Islam, while an Aleppo man likewise described them as thieves who steal from civilians, not rescuers.

Journalists present at the panel were not interested in asking follow-up questions on organ theft, staged rescues, or any of the content presented, unsurprisingly, instead asking questions about other Syrian issues.

A CBS journalist didn’t have a single question about what had just been presented, although CBS has previously repeatedly reported on the White Helmets. But their reporting, like most in corporate media, spun the transparent propaganda that is corporate media coverage of the group.

Four days after the UN panel, to my knowledge, not a single corporate media outlet has covered the event and its critical contents.

This is in spite of the fact that the Western corporate media has been happy to propagandize about the White Helmets for years, and to attack those of us who dare to present testimonies and evidence from on the ground in Syria which contradicts the official narrative.

Russian, Syrian, and Lebanese media did report on the panel, and of course if Western corporate journalists ever do bother to mention it, they will ignore the incriminating evidence presented by panellists and instead accuse Russia of bullying the White Helmets.

Prior to the panel, a number of publications came out with articles echoing one another, and in fact echoing claims already repeatedly uttered about a “Russian disinformation campaign” against the White Helmets.

‘Big bad Russia’ tarnishing the pristine image of the White Helmets, a theme rerun ad nauseum over the last year or two, and one which I addressed in early January 2018 when I was under attack for questioning the White Helmets.

In my rebuttal to a mid-December 2017 Guardian smear, I pointed out that it was not Russia which began looking into the White Helmets’ affiliations, funding, and role in the propaganda war, but two independent North American researchers.

Canadian journalist Cory Morningstar in September 2014 exposed the role of the New York based PR firm, Purpose Inc, in marketing campaigns for the White Helmets.

And as I wrote, “In April 2015, American independent journalist revealed that the White Helmets had been founded by Western powers and managed by a British ex-soldier, and noted the “rescuers” role in calling for Western intervention—a No Fly Zone on Syria.”

These, and the subsequent numerous investigations by Vanessa Beeley, including on the ground in Syria, taking countless testimonies of Syrian civilians on the matter of the White Helmets, far precede any Russian media reporting on the group.

That Russian media and bodies have since done their own investigations does not equate to a “disinformation campaign”, but rather doing the job corporate media are clearly incapable of, and unwilling to do.

Why haven’t the media written about the panel, or as per the corporate media norm, issued yet more smears against panellists?

They haven’t because they are cornered, and while they can always try their standard juvenile character smears and libel, they cannot refute the facts, the countless testimonies which corroborate yet still more testimonies taken by independent journalists over the years.

Or as Ambassador Nebenzia said:

“We understand why #WhiteHelmets are being defended by #Western capitals. They do not hide that they provided substantial financial support to this organization and instrumentalized it to pursue political goals under humanitarian cover. It’s logical to protect your asset.”

Last week, it came out that German reporter for Der Spiegel, Claas Relotius, winner of the German Reporter Award 2018, had falsified a number of his articles. One article on the fakery noted Relotius had, “confessed to have fabricated at least 14 of 55 articles,” including a “story about a Syrian boy who believed he triggered the civil war in the country with his graffiti, an article that won the German Reporter Prize just three weeks ago but which was made up.”

Former German journalist, Udo Ulfkotte, in 2014 reached his tipping point and admitted to having for years lied for Western, anti-Russia interests, admitting to making propaganda against Russia after having been bribed by billionaires, and by the Americans, to “not to report exactly the truth.”

As 2018, a year of staggering corporate media fake news, draws to a close, so do the last vestiges of credibility of media lauding the White Helmets.

Given the scandalous depth of their lies, it is unlikely corporate journalists will have an Ulfkotte moment and admit to their manifold deceptions.

But it doesn’t really matter, because more and more, Western corporate media, and the propaganda construct known as the White Helmets they support, are becoming irrelevant.