Responding to the Unique Challenge of Nuclear Weapons

3 Dec 2018 – Possession of nuclear weapons by nine nations keeps bringing up images in my mind of a pact with the Devil.  Satan in Christian lore is the “great deceiver.”  Somehow our politicians and military generals have convinced themselves that nuclear deterrence can safely go on forever.

The recent statement from the Parliament of the World’s Religions to eliminate nukes puts the “mutual deterrence” rationalization for security to rest.   What the religious leaders are missing, however, is that the United Nations will need to transform into a world federal union government if we are to permanently secure freedom from the nuclear threat.  There is no shortcut.  The clerics’ proposal for treaty-based agreements is a first step, but in the long run, treaties tend to be broken, and hence cannot be trusted.

That’s why the UN General Assembly must open the door to Charter Review (THE SAN FRANCISCO PROMISE), — in order to objectively identify what’s wrong with the Charter and what needs to be changed to correct its fatal flaws. World federalists know what changes are needed.  The Earth Constitution can help lead the way.   With the launching of a review of the UN Charter, a “new UN” or Earth Federation government can be created, –with the governing tools needed to end war and permanently eliminate nukes. Send that memo to the world’s clergy. 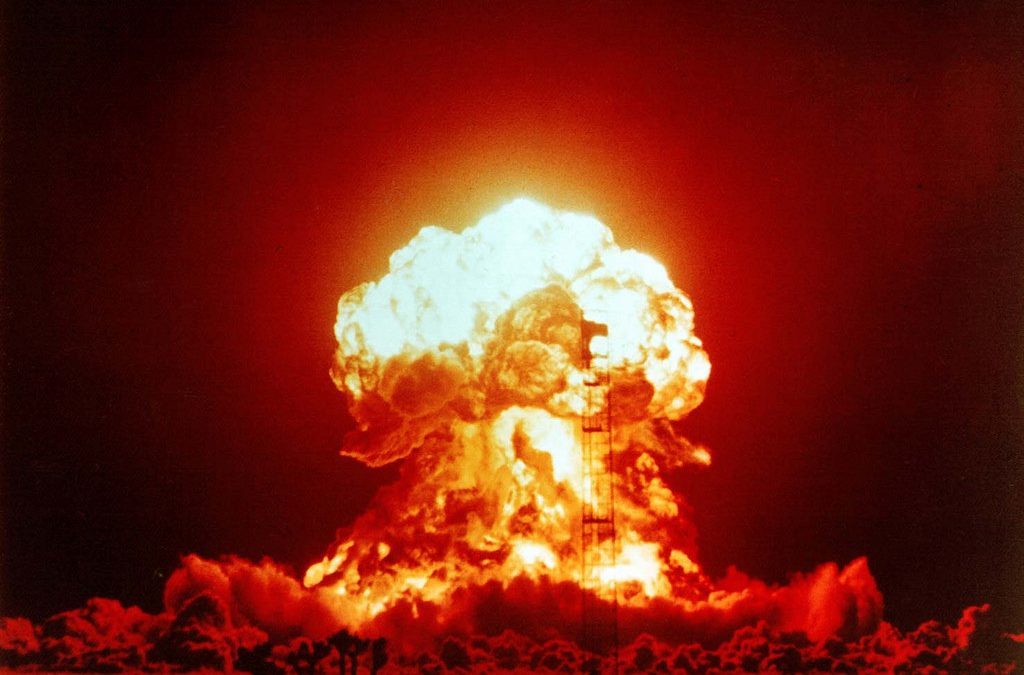 A Passionate Call from the Parliament of the World’s Religions

The destructive capacity of nuclear weapons is beyond imagination, poisoning the Earth forever. These horrific devices place before us every day the decision whether we will be the last human generation. The power to unleash this destruction is in the hands of a small number of people. No one should be holding such power over the very creation, which we regard as a sacred gift for all today and for future generations.

At present, there are over 14,000 of these devices, with hundreds on hair-trigger alert. Nine nations* claim that they can responsibly pursue global security by daily making thousands of people ready to use these weapons on a moment’s notice, by relying on machines to determine whether a threat is actual or mistaken, by spending trillions of dollars in the weapons designs and deployments, by demonizing other peoples and nations, by spending vast sums to convince populations that the weapons make them safe and secure, by demonstrating a present readiness to use the weapons to deter others from acquiring them or others with them from using them first, and by threatening to use them as an exercise of aggressive political will.

Scientific findings now demonstrate that if less than 1% of today’s arsenal were to be used, even in a first strike, the consequences would be millions of tons of soot in the stratosphere, which would lower the earth’s temperature, create dramatic ozone depletion, and render agriculture unable to sustain civilization. This would destroy the nation that used them first.

Such a posture is unworthy of civilization, insults the dignity of life, is an impediment to all ethical and moral norms of all the world’s religions. To ignore the humanitarian consequences of nuclear weapons by exalting nationalism as higher principle raises moral corrosion to unprecedented levels. The ongoing possession and threat to use nuclear weapons is a gross affront to a culture of peace and an impediment to obtaining realistic security based on protecting our planet home, eliminating poverty, and basing the conduct of nations on the rule of law.

For some nations to claim the weapons are good for them but not others violates the Golden Rule of Nations: Nations must treat other nations as they wish to be treated.

Nuclear weapons promote the culture of ultimate violence claiming implicitly that the pursuit of security by one state can rightfully place the right to existence of all future generations at risk.

The nine nations of the world placing this sword over the life of every person on the planet must change their conduct. Nuclear weapons states should take the weapons off of alert status, lower their numbers, bring the Comprehensive Test Ban Treaty into force by ratifying it, lower the operational status of the weapons, decouple the warheads from delivery vehicles, strengthen the treaty verification and inspection institutions, expand the current nuclear weapons free zones, which make the Southern Hemisphere virtually nuclear weapons-free, and commit to explicitly accept the logic so clearly stated decades ago: “A nuclear war can never be won and thus must never be fought.”

We thus make a passionate plea to the leaders of all religions, all people of good will, and all leaders of nations both with and without nuclear weapons to commit to work to eliminate these horrific devices forever.

We support the Treaty for the Prohibition of Nuclear Weapons and the duty explicitly stated in the Nuclear Non-Proliferation Treaty to obtain a nuclear weapons-free world. We call upon the nine nations with the weapons to promptly commence negotiations to obtain a legal instrument or instruments leading to the elimination of all nuclear weapons.

*United States, Russia (with over 90% of the weapons), China, France, the United Kingdom (Five Permanent Members of the Security Council and members of the Nuclear Nonproliferation Treaty) and India, Pakistan, North Korea, and Israel.

Jonathan Granoff is an attorney, author and international advocate emphasizing the legal and ethical dimensions of human development and security, with a specific focus on advancing the rule of law to address international security and the threats posed by nuclear weapons. He serves on numerous governing and advisory boards including: Lawyers Committee on Nuclear Policy, Fortune Forum, Jane Goodall Institute, the NGO Committee on Disarmament, Peace and Security, Parliamentarians for Nuclear Nonproliferation and Disarmament, and Middle Powers Initiative. He is a recipient of the Rutgers University School of Law’s Arthur E. Armitage Distinguished Alumni Award and a 2014 nominee for the Nobel Peace Prize.