The War in Afghanistan Isn’t a ‘Stalemate.’ The U.S. Has Lost 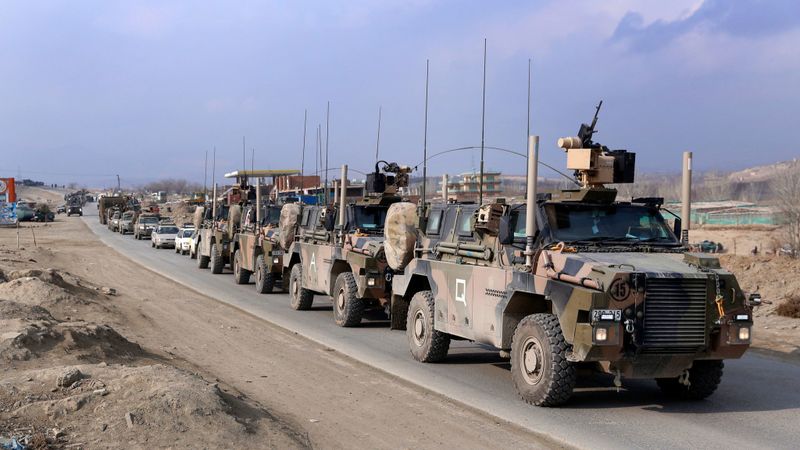 International troops’ military tanks leave the scene of a suicide bomb attack that targeted a convoy of security forces on the outskirts of Kabul, Afghanistan on Dec. 11.
(Hedayatullah Amid / EPA-EFE / REX)

19 Dec 2018 – With the sole exception of Vietnam, the ongoing Afghanistan war represents the greatest failure in U.S. military history. Today, all but a few diehards understand that Vietnam was a debacle of epic proportions. With Afghanistan, it’s different: In both political and military circles, the urge to dodge the truth remains strong.

This may explain, at least in part, why the present commander in chief has yet to visit the war zone. For a president with an aversion to accepting responsibility, traveling to Afghanistan would call attention to a situation he prefers to ignore. After all, Donald Trump campaigned against the war and vowed if elected to end it forthwith. Once in office, however, he caved in to advisors urging him not only to continue the war but even to dispatch a contingent of reinforcements. Steering clear of Afghanistan allows Trump to sustain the pretense that the war is not actually his.

If only by default, it becomes incumbent on the military itself to explain what’s going on. With the Afghanistan war in its 18th year, Gen. Joseph Dunford, chairman of the Joint Chiefs of Staff, characterized the war as a “stalemate” last month. Other high-ranking officers regularly use the same term.

The most significant indicator of a war gone badly awry is this: The U.S. has now quietly opened negotiations with the enemy.

Coming from seasoned professionals who preside over what is ostensibly the world’s mightiest armed forces, this qualifies as a remarkable, though misleading, admission.

The truth is that the United States is losing in its effort to bring order and stability to Afghanistan. The relatively small number of recent U.S. casualties — 13 fatalities in all of 2018 — should not distract from the pertinent facts. Terrorist attacks in Afghanistan occur on a daily basis, with Afghan security forces suffering losses at a rate that even the incoming commander of U.S. Central Command describes as unsustainable. The Taliban now directly controls or contests more than 60% of the districts across Afghanistan. Coalition efforts to foster political legitimacy and create a functioning economy have flopped. Afghan opium production, a major source of insurgent funding, has reached an all-time high.

The most significant indicator of a war gone badly awry is this: The U.S. has now quietly opened negotiations with the enemy. Recall that the immediate military objective of Operation Enduring Freedom when launched back in 2001 was to destroy the Taliban and thereby prevent Afghanistan from ever again becoming a terrorist sanctuary. Yet, now the United States seeks to end the war by coming to terms with the Taliban. That is a de facto admission of failure.

On the one hand, of course, it makes sense for the United States to cut its losses in Afghanistan, and the sooner the better. Substantive U.S. interests there have never been other than marginal. In any logical ranking of U.S. strategic priorities, Afghanistan comes nowhere close to justifying the trillion-plus dollars that the United States has spent there since it first intervened.

On the other hand, some might argue, the United States has a moral obligation to finish what it began. After all, previous administrations stressed that U.S. involvement in Afghanistan included a moral component. The U.S., it was said, was seeking to spread freedom and democracy and to advance the cause of women’s rights. Helped by the United States, Afghanistan would become a beacon of modernity in the Islamic world.

Enter the Fray: First takes on the news of the minute from L.A. Times Opinion »

None of that has come to pass, nor will it. So bending to the dictates of realpolitik, authorities in Washington are now proceeding down a path not unlike the one followed by their predecessors a half-century ago when the United States found itself stuck in another unwinnable war. That path culminated with the U.S. selling out its ally and leaving the South Vietnamese people to their fate. Although no U.S. government official will yet admit to the fact and few Americans care enough to notice, a similar fate now awaits Afghans.

If the United States were, in fact, what many Americans imagine their country to be — exceptional, indispensable, history’s chosen agent of salvation — the story of U.S. involvement in Afghanistan might have a different ending. But we are not all that different from other great powers in other ages.

Andrew Bacevich is the author most recently of Twilight of the American Century.