The UN Security Council, the IMF, the World Bank and the ILO were conceived as agencies of change – they can be again.

1 Dec 2018 – A Nationalist International is under construction. From Viktor Orbán in the north to Jair Bolsonaro in the south, Rodrigo Duterte in the east to Donald Trump in the west, a coalition of nationalist strongmen are cracking down on civil rights, scapegoating minorities and facilitating widespread corruption for their family and friends.

There is growing recognition that – to fight these forces of division – we must forge our own Progressive International movement. In the United States, Bernie Sanders has called to “unite people all over the world” to counter authoritarianism. In the United Kingdom, Jeremy Corbyn has promised to draw on “the best internationalist traditions of the labour movement”. If Benjamin Netanyahu’s attendance at Bolsonaro’s inauguration suggests strong ties between nationalist leaders, Corbyn’s attendance at Andrés Manuel López Obrador’s inauguration suggests growing solidarity between leftwing ones, as well.

But while thinking global, the new internationalists continue to act local. Of course, they debate questions of foreign policy, attend international forums, and march against military intervention. But when it comes to supporting causes abroad, their actions are largely symbolic: tweets and petitions that purport to “stand in solidarity” with imperiled communities.

Ignored, untouched or otherwise dismissed is a vast infrastructure of international institutions. These institutions have tremendous power – all too frequently abused by the officials at their helm – to transform the world. Yet they remain beyond the scope of most progressive politics.

Some of the most powerful tools, in other words, remain outside the internationalist toolbox.

The heyday of western internationalism came immediately after the Second World War, as Franklin Roosevelt’s New Deal went global. On the back of the remarkable Bretton Woods system – the global monetary system established at a 1944 conference in New Hampshire – international institutions were designed to prevent the return of another Great Depression and the subsequent collapse of liberal democracy.

However, once the Bretton Woods system died out in the early 1970s, these international institutions turned against the very principles on which they were founded.

The International Monetary Fund, created to help struggling governments stay solvent, morphed into the enforcer of harsh austerity upon the weakest. By the end of the 1990s, to the people of Africa, eastern Europe and south-east Asia, the acronym IMF had become synonymous with ruinous cuts in public education, public health and social security. More recently – and against the better judgment of its own staff – the IMF assisted the European Union in extending Greece’s insolvency while dismantling protections for the neediest.

Similarly with the other Bretton Woods-era institution, the World Bank. Instead of acting, in accordance with its original remit, as the engine of development in the interests of those lacking access to investment funding, the World Bank worked closely with the IMF to implement the infamous Washington Consensus, spreading the gospel of liberalized financial markets, privatized natural resources and trade agreements that prioritized free movement of capital and goods – though never, of course, of people.

Then, there is the International Labor Organization. Established in the aftermath of the First World War, the ILO brought 44 nations together in a shared commitment to improving working conditions around the world – a radical vision of internationalism and the first of its kind. “Poverty anywhere constitutes a danger to prosperity everywhere,” the ILO’s constitution proclaims, “and must be addressed through both national and international action.” 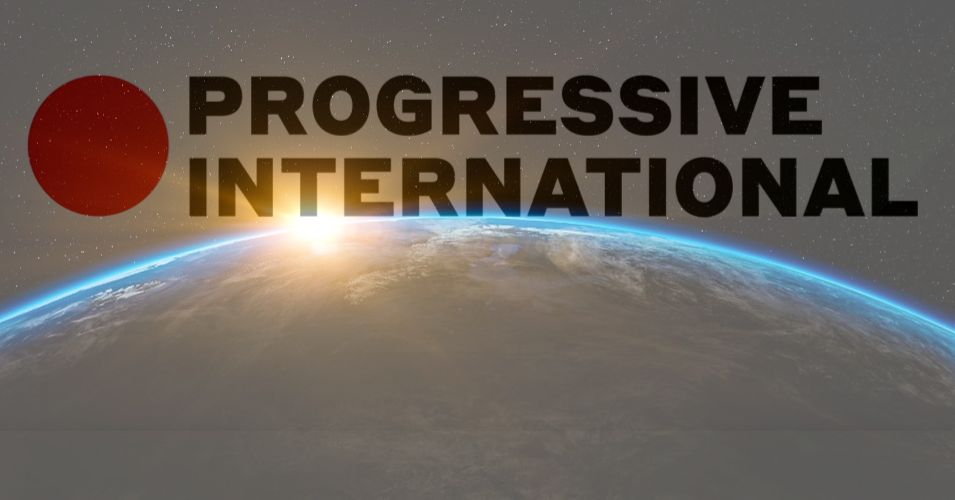 To unify the global left and defeat the rise of fascism worldwide, reads the call to action from the newly-formed Progressive International, “we cannot simply go back to the failed status quo of the last few decades. Unfettered globalization promised peace and prosperity. But it delivered financial crisis, needless war, and disastrous climate change, instead.”
(Image: Progressive International / with overlay)

Nevertheless, a century later, at a time when labor is exposed to motivated precariousness and wholesale Uberisation, the ILO is at once more needed and more absent than ever. Having traded its early radicalism for dry technical assessments and pointless compliance checks, the ILO has lost its political salience and, indeed, all but disappeared from the political vocabulary.

In short, between the 1970s and the 1990s, these international institutions faithfully delivered the Davos world order, serving the interests of the financial elite against those of the countries they were designed to represent.

Today – after a decade lost to financial crisis – that Davos world order is cracking under the weight of global discontent. But tragically, it has been the xenophobic right that has gained most from this windfall of righteous indignation, just as it did in the 1930s.

This demolition plan has polarized progressives between two camps. Some, reflecting on the brutality of the Washington Consensus, cheer on the challenge to international institutions, wishing them to crumble. Others, fearing the collapse of the “liberal” international order, leap uncritically to their defense.

Both are wrong. To achieve progressive goals on a global scale, from worker rights to climate justice, we must reclaim the international institutions and deploy them to deliver an International Green New Deal.

That is why DiEM25 and the Sanders Institute have launched the Progressive International movement: to mobilize people around the world to transform the global order and the institutions that shape it.

The IMF should oversee an international monetary clearing union that rebalances the current gross capital and trade imbalances.

The World Bank should oversee a Green New Deal in collaboration with Europe’s and China’s public investment banks, aided by coordinated interventions in the bond markets by our central banks.

The ILO should have the power not only to investigate countries like the United States and corporations like Amazon, but also to sanction them for suppressing unionization efforts and failing to comply with international labor standards.

A reinvigorated United Nations, with a security council elected from a UN assembly comprising not just government appointees but also citizens from around the world, should forge binding commitments to swift ecological transition.

Many people sympathize with the aims of internationalism, but doubt their feasibility: the institutions, they say, are beyond the reach of everyday people. But such a view is fatalistic at best, and reckless at worst. Just a few years ago, many progressives thought that political parties like UK Labour and the US Democrats were incapable of redemption. But new grassroots movements are now fighting to take back control of these parties at local, state and national levels. If our political representatives once came together to design international institutions, there is no reason to think that they cannot redesign them now.

Of course, internationalists should go beyond the scope of existing institutions to imagine new ones. Our present crisis – just like that of 1919 or 1944 – is an opportunity to develop new and better infrastructure for achieving internationalist aims: a Tax Justice Authority, for example, that is empowered to eliminate tax evasion.

But we might begin with the modest agenda outlined here because of its pragmatism. International institutions will continue to function for the foreseeable future. The only remaining question is how, and for whom.

Internationalists must realize the power of these institutions to transform the world for the better, and reclaim them as our own. The alternatives – the technocratic status quo and the strongman unilateralism that has emerged to challenge it – are simply unacceptable.

Yanis Varoufakis, a former finance minister of Greece, is a professor of economics at the University of Athens and the co-founder of DiEM25 (Democracy in Europe Movement). His latest book is And the Weak Suffer What They Must? Europe’s Crisis and America’s Economic Future.

David Adler is a writer and a member of DiEM25’s Coordinating Collective. He lives in Athens, Greece.