After the custom of consigning menstruating women to outdoor sheds claimed three more lives, a new system of penalties offers hope of change. 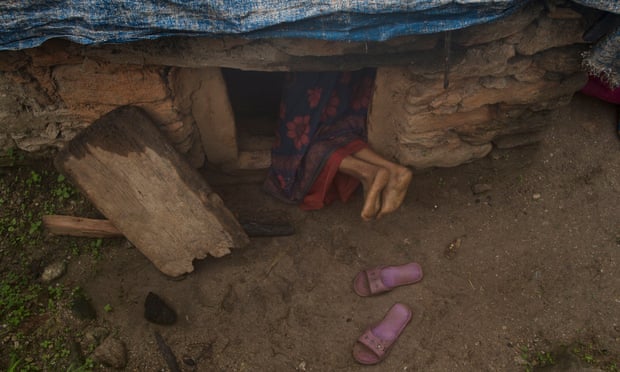 A woman enters a ‘period hut’ in Mastamandali village in Nepal’s Accham district, where local authorities are now withholding state support from families that practise the custom.
Photograph: Narendra Shrestha/EPA

14 Jan 2019 – Chhaupadi, the practice of banishing girls and women to a hut or shed when they have their periods, is common in Dilu Bhandari’s village in Nepal.

But two months ago Bhandari, a 26-year-old mother of four, watched as her husband destroyed the tiny hut in which she had previously been sent to live once a month. The family had been told by local authorities that if she continued to observe the custom, they would no longer receive state food support. Forced to choose between a food allowance for her twin boys and abandoning the traditional practice, the choice was effectively made for them.

The withdrawal of state support services is one of the penalties being brought into force as the country tries to tackle chhaupadi, which was banned by the supreme court in 2005 and criminalised by the government last year. Forcing a menstruating women into a “period hut” is now punishable with three months in prison and a 3,000 rupee (£33) fine.

Reports nonetheless emerge each year of women dying in huts from snake bites, smoke inhalation or fire. The practice has also been linked to death and illness among mothers and newborn babies.

Only this week, a woman and her two sons suffocated to death in a windowless hut while practising chhaupadi in the country’s Bajura district.

But local authorities in some of Nepal’s more remote regions, particularly in the west of the country, where the practice is still common, are determined to act.

Watch: The menstruating Nepalese women confined to a cowshed

“It’s been a year and we are trying to make people aware about chhaupadi,” says Janak Bhandari, ward president for Bhandari’s village in Achham district. “[When someone] comes to my office to get government services and facilities, like nutrition allowance, old age allowance, birth registration, citizenship recommendation, loan recommendation etc, we ask them first whether they are practicing chhaupadi. If they say yes, we ask them to destroy the hut and come again to claim government benefits and use facilities.”

Bhandari says there has been a 20% drop in the number of women sleeping in huts during their periods.

“This ill-practice has to end soon and we are working on this.”

Ramaroshan rural municipality in Achham district is running a major awareness programme under the banner “Inside chhaupadi, outside god”.

The vice-chairwoman of the municipality, Saraswati Rawal, said: “We are building a big temple in the middle of a village and have asked people to keep their gods respectfully at the temple and let woman and girls stay at home during their period.”

In some parts of Nepal, people think they will be punished by God if women enter the home during menstruation.

“Here, we solved our problem,” says Rawal. “Keep god at the temple, let woman stay at home then god will be happy and women will be safe too.”

Rawal says that, since the campaign started five months ago, between up to 20% fewer women stay in huts.

But Pasupati Kunwar, who runs Sama Bikash Nepal, an organisation that champions marginalised women, says progress has been slow.

“Almost 95% of people used to practise chhaupadi when I started a campaign against it 10 years ago,” she says. “But now I can say it’s 60%.”

Kunwar says the authorities need to look at people’s living arrangements, particularly those who share their homes with animals. “They keep animals on the first floor and the second floor is for them, for god, eating and sleeping. Lack of space leads woman to go to huts during menstruations. The government needs to come up with a solution to this,” she says.

Tham Maya Thapa, Nepal’s minister for women, children and senior citizens, believes it will take time to end a custom so deeply entrenched in Nepalese society. “The practice of chhaupadi has been going on for hundreds of years,” she says. “The tradition is not easy to break in one or two years.

“Since last August, it’s a crime to force a menstruating woman into seclusion, punishable by up to three months in jail and a fine. But law and rule always don’t work to break such a long-running tradition.”

After Dilu Bhandari was told she couldn’t get food benefits, she went home and told her husband and her mother-in-law. “I was so surprised and angry at that time. I thought: ‘What kind of rule is this?’ You know how important it is to get nutritional food for us, as we are very poor. My husband works as a labourer and I’m a housewife. We don’t earn enough money to buy it.”

After the chhaupadi hut was destroyed, Bhandari started staying on the second floor of their house during her period.

Dilu’s mother-in-law was not happy at first. She worried that God would be angry and punish them. “But nothing bad has happened to us yet,” says Dilu.