Fact Check: How Many People Are Enslaved in the World Today?

Burmese fishermen raise their hands as they are asked who among them wants to go home. Human trafficking sometimes occurs in the seafood industry. AP Photo/Dita Alangkara

7 Jan 2018 – Modern slavery is a crime against humanity. Although some types of enslavement, like sex trafficking, are widely known, others hide in plain sight. Enslavement happens in many industries – including restaurants, domestic work, electronics, construction, textiles, steel and seafood.

But exactly how many people live in slavery today? Whether it’s measuring modern slavery in the U.S. or across the globe, there are different, inconsistent, estimates.

As someone who researches modern slavery, I know that calculating its prevalence is like finding a needle in a haystack. A valid figure is elusive – and yet essential for better policies to free enslaved persons and help them make the difficult transition to liberation.

Definitions of modern slavery have shifted over time.

In 1926, the League of Nations defined slavery as the “status or condition of a person over whom any or all of the powers attaching to the right of ownership are exercised.” The U.N. broadened this definition in 1956 to include forced marriage and more protections for women’s rights.

Things changed again in 2000. The U.N. introduced the term “trafficking in persons” and omitted references of forced marriage from the widely adopted Palermo Protocol. But by 2013, the U.N. General Assembly recognized forced marriage as a form of enslavement.

Definitions matter because they influence how the public and policymakers interpret the issue. In a court of law, for instance, the term “human trafficking” might be more persuasive to jurors than a term like “slavery.”

For researchers, nuances also matter when it comes to estimating the number of people enslaved. Some organizations include forced marriage in their estimates of modern slavery; others do not.

Still others disagree about when harsh labor conditions merit the label “enslavement.” The International Labor Organization has said, “Not all children who are exposed to hazardous work are ‘slaves,’ and not all workers who don’t receive a fair wage are forced.”

Among published estimates of forced marriage, the numbers are staggering. Based on its calculations, UNICEF estimates that approximately 650 million girls and women alive today were married before their 18th birthday. 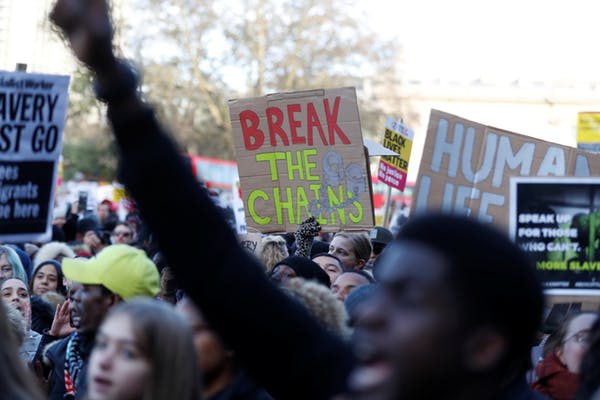 Demonstrators protest against slavery outside the Libyan embassy in London, December 2017. REUTERS/Peter Nicholls