Time to Get Out of Afghanistan

The United States is spending beyond its means on a mission that might only be helping its strategic rivals. 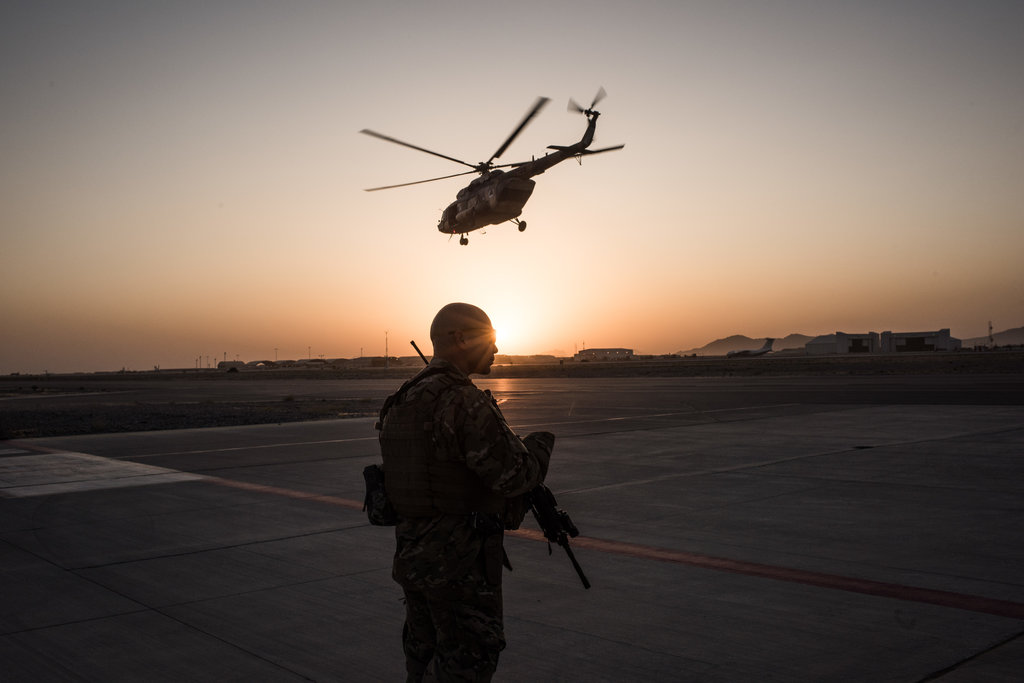 A member of the United States Air Force at Kandahar Air Field in Afghanistan. President Trump has decided to pull out about half of the 14,000 American troops there. Credit Andrew Renneisen/Getty Images

1 Jan 2019 – The decision by President Trump to withdraw 7,000 of the roughly 14,000 American troops left in Afghanistan, possibly by summer, has raised new concerns about his impulsive behavior, especially given his nearly simultaneous decision to pull out all American forces from Syria against the advice of Defense Secretary Jim Mattis. But the downsizing of the Afghan mission was probably inevitable. Indeed, it may soon be time for the United States to get out of the country altogether.

No other country in the world symbolizes the decline of the American empire as much as Afghanistan. There is virtually no possibility of a military victory over the Taliban and little chance of leaving behind a self-sustaining democracy — facts that Washington’s policy community has mostly been unable to accept.

While many American troops stay behind steel-reinforced concrete walls to protect themselves from the very population they are supposed to help, it is striking how little discussion Afghanistan has generated in government and media circles in Washington. When it comes to Afghanistan, Washington has been a city hiding behind its own walls of shame and frustration.

While the Chinese, Pakistanis, Indians and Iranians are all developing competing energy and mining projects in and next door to Afghanistan, the United States appears to have little commercial future in the country, even though it spends about $45 billion there annually. The total cost of the war could reach as high as $2 trillion when long-term costs are factored in, according to Brown University’s Cost of War Project. All that to prop up an unstable government that would most likely disintegrate if aid were to end.

Indeed, Afghanistan represents the triumph of the deterministic forces of geography, history, culture, and ethnic and sectarian awareness, with Pashtuns, Tajiks, Uzbeks and Hazaras and other groups competing for patches of ground. Tribes, warlords and mafia-style networks that control the drug trade rule huge segments of the country. To show just how perverted Western experts’ view of the situation has become, the British regional specialist Anatol Lieven, writing in The National Interest, argues that “just because the U.S. money was stolen does not mean that it was wasted,” since it has gone to paying off tribal chiefs to keep them from joining the Taliban or becoming feuding warlords.

It did not have to be like this. Had the United States not become diverted from rebuilding the country by its invasion of Iraq in 2003 (which I mistakenly supported), or had different military and development policies been tried, these forces of division might have been overcome. According to the Pakistani journalist Ahmed Rashid, there was simply too much emphasis on the electoral process in Kabul and not nearly enough on bread-and-butter nation building — in particular, bringing basic infrastructure and agriculture up to the standards that Afghans enjoyed from the 1950s until the Soviet invasion of 1979.

Certainly, no place is hopeless. But that is not where we are now. The heavily Pashtun Taliban, an accessory to the Sept. 11 hijackings, continues to make battlefield gains and, if there are actual peace negotiations, is poised to share power with the American-backed government of President Ashraf Ghani, if not eventually replace it. The United States’ special adviser to Afghanistan, Zalmay Khalilzad, is trying to broker a diplomatic solution that allows the United States to draw down its forces without the political foundation in Kabul disintegrating immediately.

That may be the real reason the United States keeps spending so heavily in Afghanistan. The Pentagon is terrified of a repeat of 1975, when panicked South Vietnamese fled Saigon as Americans pulled out and North Vietnamese forces advanced on the city. The United States military did not truly begin to recover from that humiliation until its victory in the Persian Gulf war of 1991. An abrupt withdrawal from Afghanistan could conceivably provide a new symbol of the decline in American hard power.

There is also the fear that an Afghanistan in chaos could once again provide a haven for an international terrorist group determined to perpetrate another Sept. 11-scale attack. Of course, Yemen, Somalia and a number of other places could also provide the setting for that.

The point is, we remain in Afghanistan out of fear of even worse outcomes, rather than in the expectation of better ones. Washington now merely hopes that Mr. Khalilzad, an experienced diplomat born in Afghanistan, can deliver a decent interval of stability.

The Chinese, Pakistanis, Russians, Indians and Iranians, meanwhile, may all be benefiting more from America’s military operations in Afghanistan than the United States is. Our presence may provide just enough security to allow their energy and transport corridors to take shape, while also helping the Russians guard against Islamic terrorism on their southern border. Thus, our rivals build their own empires on the back of our declining one.

One might argue that a collapse of the pro-American government in Kabul would allow those countries to gain even greater footholds in Afghanistan. But then stabilizing the unruly country would become their problem.

An enterprising American diplomat, backed by a coherent administration, could try to organize an international peace conference involving Afghanistan and its neighbors, one focused on denying terrorist groups a base in South-Central Asia.

It is the kind of project that Henry Kissinger, Richard Holbrooke, James Baker III or George Shultz would have taken up in their day. But it is not something anyone can reasonably expect this administration, as chaotic, understaffed and incompetent as it is, to undertake, especially with the departure of Mr. Mattis.

Do we owe it to the Afghan people to stay? Not if the ideals that we claim to represent appear unachievable. Spending billions and stationing thousands of troops there with no end in sight to stem a deepening chaos is simply not sustainable policy. Even a small fraction of that money could be better spent on smarter infrastructure investments in Asia, such as liquid natural gas terminals and dual-use ports in Vietnam to compete with China’s maritime Belt and Road Initiative.

Our withdrawal should not be sudden. It should reduce outlays and give Ambassador Khalilzad time to work out an arrangement with our allies, all without public timetables that enable our adversaries to wait us out.

But let’s be honest with ourselves: Afghanistan is like the huge and hugely expensive aircraft carriers we continue to build, increasingly obsolete in an era of sophisticated missile technology and hypersonic warfare. It is a vestigial limb of empire, and it is time to let it go.

Robert D. Kaplan, a senior fellow at the Center for a New American Security and a senior adviser at Eurasia Group, is the author of, most recently, The Return of Marco Polo’s World: War, Strategy, and American Interests in the Twenty-First Century.

A version of this article appears in print on Jan. 2, 2019, on Page A19 of the New York edition with the headline: Time to Get Out of Afghanistan.

One Response to “Time to Get Out of Afghanistan”