On his 90th birthday, understanding Martin Luther King’s real message is more crucial than ever before. 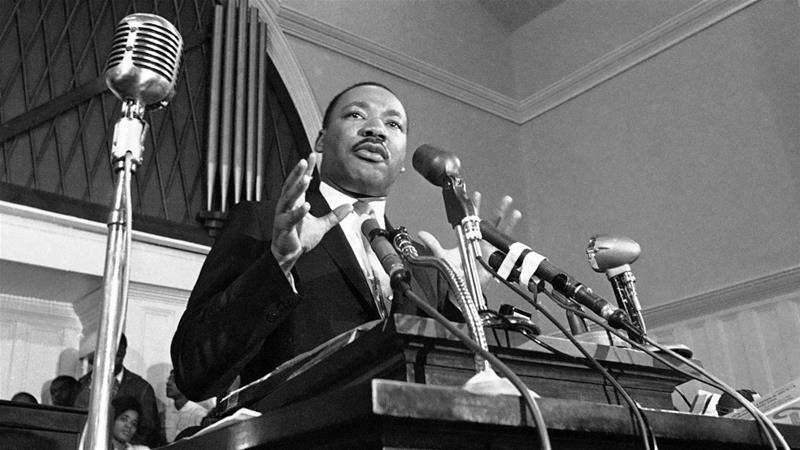 15 Jan 2019 – This month marks the 90th birthday of Martin Luther King, Jr the iconic American civil rights and human rights leader who forced America to live up to its rhetorical ideals of freedom, democracy and equality. For his efforts, he was assassinated in 1968.

The fallen Nobel laureate and “drum major for justice” – vilified, ostracised and loathed in life, monitored and hunted by the government – was honoured posthumously with a federal holiday in the United States. Yet, as that holiday has been diluted and repositioned into a national day of service, and Dr King’s character has been neutered and rendered a passive, innocuous and idealistic dreamer who gave rousing speeches, Americans have lost sight of the man’s revolutionary philosophy.

Five decades ago, Martin Luther King warned of America’s triple evils: racism, economic exploitation and militarism. These evils continue to plague the country to this day, necessitating the radical restructuring of society the black leader so urgently promoted.

“I am convinced that if we are to get on to the right side of the world revolution, we as a nation must undergo a radical revolution of values,” King said in his “Beyond Vietnam” speech. “We must rapidly begin … the shift from a thing-oriented society to a person-oriented society. When machines and computers, profit motives and property rights, are considered more important than people, the giant triplets of racism, extreme materialism, and militarism are incapable of being conquered.”

Racism, the original American sin born from the enslavement of Africans and the genocide of indigenous peoples, has not abated. In his 1963 “I Have A Dream” speech, King said as black people were concerned, the US had failed to honour its promises written in the Constitution and the Declaration of Independence. “Instead of honouring this sacred obligation, America has given the Negro people a bad check, a check which has come back marked ‘insufficient funds’. But we refuse to believe that bank of justice is bankrupt,” he said.

Today, the US has yet to address reparations to African Americans to repair the damage of enslavement and the continuing legacy of institutional racism, including both de jure and de facto racial and economic discrimination.

Open and avowed white supremacists operate in the government, engaging in whites-only policies based on a false racist theory of white genocide, with an immigration policy of ethnic cleansing, separation of migrant families and imprisonment of 15,000 children – all designed to keep whites in the majority. Meanwhile, white supremacist hate groups are thriving in the streets, with a sharp increase in hate crimes and school bullying in the era of Trump.

The US is a “flawed democracy” according to the Economist’s 2018 Democracy index, ranking only 25th globally in terms of political participation and culture, governmental functions, electoral process, civil liberties and pluralism. In states such as Georgia and North Carolina, white conservatives of the Republican Party employ segregation-era voter suppression tactics against people of colour and the poor, including restrictive and unjust voter ID laws, voter purges, rigged elections and votes stolen, and gerrymandered legislative districts.

Despite professing to be the self-proclaimed “land of opportunity”, the US maintains a predatory capitalist system with pathological levels of economic inequality. In a land of abundance, only a handful enjoy its wealth. With 40 million people in poverty, the US is the most unequal advanced nation, with the least social and economic mobility in the developed world. The US profits from misery through private prisons, and a for-profit healthcare system that forces people to go bankrupt and into poverty while paying for medical bills.

The wealthiest one percent owns 40 percent of the nation’s wealth, while the top 10 percent controls 77 percent of the wealth. While working Americans are drowning in nearly $1.5 trillion student loan debt they are unable to pay off. And as conservatives shake their heads and proclaim nothing can be done, the nation engages in policies of plunder of poor and working people, such as a $1.5 trillion tax cut almost entirely for the benefit of the top one percent.

Meanwhile, Trump forces a government shutdown over his vanity border wall that leaves 800,000 federal workers without pay, and he advises furloughed workers to make adjustments and, barter with their landlords and hire an attorney.

A culture of corruption precludes the US from solving its problems. Politicians are beholden to moneyed interests rather than held accountable to the public, a Harvard Business School report suggests. Laws promoting gun proliferation, environmental degradation and “loyalty oaths” to other nations reflect the largesse bestowed upon these politicians by lobbyists who seek to enact them.

Martin Luther King, aware of the connections between injustices at home and abroad, spoke out against US proclivity for war. “As I have walked among the desperate, rejected, and angry young men, I have told them that Molotov cocktails and rifles would not solve their problems,” King said. “I knew that I could never again raise my voice against the violence of the oppressed in the ghettos without having first spoken clearly to the greatest purveyor of violence in the world today: my own government.”

Today, the US meddles in the affairs of other nations, waging drone wars and killing hundreds of thousands of innocent civilians in the name of the “war on terror”, assassinating people and engaging in regime change. Decades of US intervention in Central America caused skyrocketing levels of corruption and violence that fuelled a migrant crisis.

Meanwhile, King predicted “spiritual doom” for an America that continues to spend more on war than on social uplift. Today, a nation which claims it must cut social welfare spending and cannot afford free universal healthcare or college spends trillions of dollars on defence – 37 percent of world military spending and more than the next seven highest spenders combined – and yet cannot account for how the military allocates that money.

Rather than heed his message, America killed King, the messenger. Then, it watered down his message to render it more palatable and digestible to the “white moderate” who is “more devoted to order than to justice”, and prefers that we wait for a “more convenient season” for freedom rather than take direct action now. If America hopes to redeem itself, it must change now.

David A Love is a Philadelphia-based freelance journalist and commentator.

Martin Luther King Jr. was awarded the 1964 Nobel Peace Prize for Civil Rights and Social Justice. King adhered to Gandhi’s philosophy of nonviolence. In 1955 he began his struggle to persuade the US Government to declare the policy of racial discrimination in the southern states unlawful. The racists responded with violence to the black people’s nonviolent initiatives. (The Norwegian Nobel Institute)