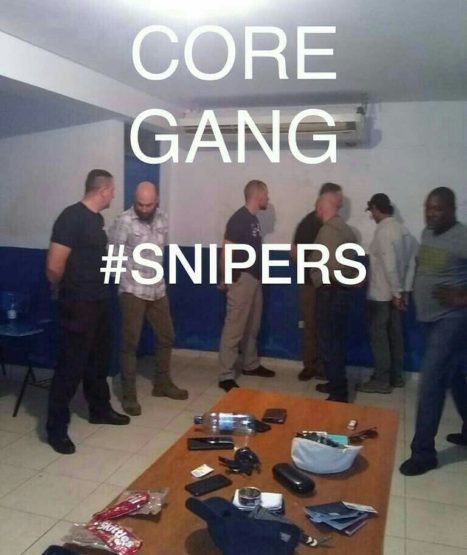 21 Feb 2019 – On February 20, 2019, five former American military men and other nationals arrested on 17 Feb got on a specially charted plane and took off for the United States.

Haiti police the 8 mercenaries, including 5 Americans, 1 Serbian and 1 Russian on February 17 and charged them with weapons trafficking and conspiracy to commit crimes. The US took with them all the foreign nationals arrested, except the lone Haitian. Here’s the footage, from the airport of the military hit squad released without trial and at the airport leaving Haiti assisted by the U.S. ambassador.

Charged as Snipers by the Prime Minister of Haiti

Jean Henry Ceant, the Prime Minister of Haiti, has charged, in an interview on CNN, that the strike team arrested on Sunday were not going to the bank to rob it but where scoping the rooftop of the bank, which is directly across from the Prime Minister’s office and the Parliament building in order to assassinate him and certain parliament members. He made this claim after publishing the mercs’ connection to, Fritz Jean Louis, a senior advisor to president Jovenel Moise and the National Palace.

The U.S. supported Prime Minister, accuses U.S. mercenaries of wanting to kill him. Then the U.S. ambassador helps free these accused assassins. Some didn’t get the memo.

Read the Haitian reaction to the Prime Minister’s attempt to distance himself from his President, at our twitter feed, Facebook pages here and here, the FreeHaiti Movement and Instagram. Stay tune.

PM Ceant is not the victim of the mercenaries. That narrative2distance himself from pres Jovenel won’t fly. Dead Haitian police & protestors already killed perhaps by foreign snipers at protests2keep Jovenel/Ceant in office, are the real victims of his government’s hired violence!  – https://twitter.com/Ezilidanto/status/1098044194017431552 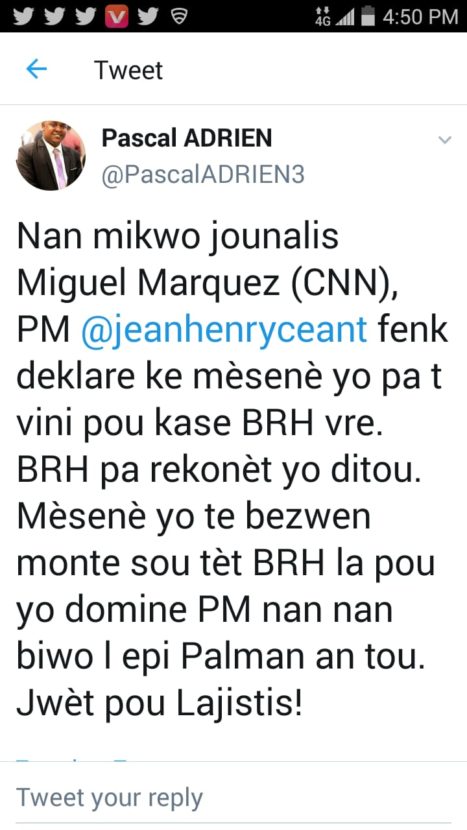 The five Americans were arrested at a police check point along with two other foreign mercenaries and one Haitian. The names we have include,

They were driving two cars without license plates and filled with illegal assault weapons, grenades, drones, satellite phones and war weapons not allowed in Haiti. Five plates were found inside the cars, one belong to, Fritz Jean Louis, an advisor to Haiti president, Jovenel Moise. License plate DM-01616 is registered to Fritz Jean Louis who purchase the car from Magalie Habitant, a former director general of SMCRS. Fritz Jean Louis has fled country, says the police. It’s alleged suspects reside in Ms. Habitant’s home the night before the arrest. See documents here.

Sunday, before he fled the country, Fritz Jean Louis, told the news media that the men were in the country to do some security work for the Bank. The head of the Central Bank of Haiti says he knows nothing about this. 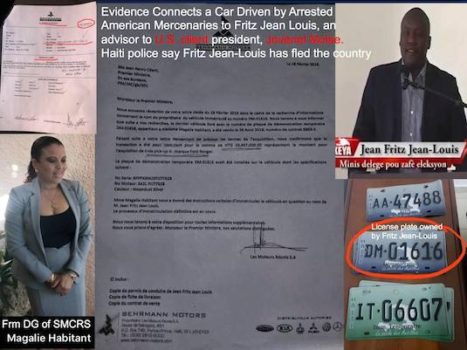 Accusations of Committing Acts of Terrorism Against the Haitian population

For a time now, Haitian unarmed protestors would marching along demonstrations roots, singing and calling for a better life and living conditions from the government would be picked off by sniper gun fire from long distance away. This is not new in Haiti. What is new is that, on November 18, 2018, a convoy of heavily weaponized trucks, painted camouflage pink, the color of the ruling PHTK party, began showing up in the demonstration routes, intimidating and repressing the demonstrations. 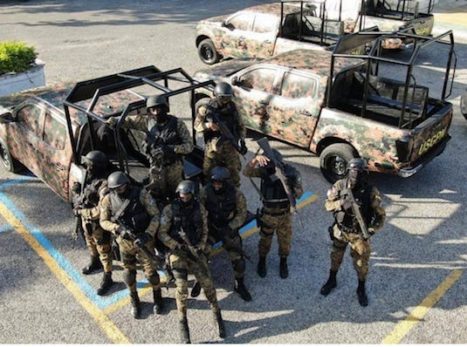 The anti-government demonstrators immediately noticed there where white men in these pro-government units with heavily military weapons, including trucks mounted with rocket launchers. The Chief of Police, Michel Ange Gedeon told the public these were fake police, and he didn’t recognize any of these men as part of the Haitian National Police Force. Since then, Chief Gedeon has been arresting these fake cops.

At that time, executive at the national palace claimed these units as President Jovenel Moise’s National Palace security team. Chief Gedeon said they were not authorized to constitutionally patrol the streets, only the national police force and command have this authority.

However for the protests that followed, these units would continually show up in the streets. Demonstrators would be assassinated with a single headshot and more often than not, an ambulance would cart away bodies, sometimes never to be found again by family members. But cell phones are every where and Haitians took pictures

Now, comes February 17, 2019 and 7 foreign mercenaries with one Haitian are arrested.

We’ve published two Kreyòl audio recordings at Soundcloud of Haiti Parliament members with inside police knowledge, speaking on the matter, here and here.

To summarize, first audio report, done the day of the arrest, February 17, 2019, corroborates the information provided in the second interview.

According to this report, a government authority from the National Palace was with the mercenaries when they were arrested. This person was not arrested. Furthermore, two government authorities from the Palace quickly arrived at the police station in attempt to get the mercenaries released, one judiciary authority, one political authority (unnamed). The 8 men were on their way from the Central Bank of Haiti, driving in unmarked cars without license plates.

We also learned from this source that there are other foreign commandos in Haiti, working with this group of men. Some say at least 20 of them are still in Haiti.

The second audio reporting in Kreyòl news radio gives more details and names the people from the government who descended on the police station to get the men released. The speaker is former President of the Haitian Senate, Desras Simon Dieuseul. He is interviewed by radio host, Jean Monard on February 18. Essentially, the exchange explains how these men, hired violence, driving around in cars without license plates in Haiti, are implicated in numerous acts of international terrorism in Haiti that are then blamed, in the international media, on looting Haitians, violent Haitians and on the peoples’ resistance to the corrupt status quo.

Senator Desras alleges that the foreign mercenaries have been in Haiti since early November 18, 2018 driving cars without license plates or changing the licenses at will, to avoid detection of their crimes. He charges the Jovenel Moise government, working with the Core Group of internationals, with orchestrating extrajudicial violence to quell legal and democratic protest to their rule. He goes into details so listen to the recording yourself.

He accuses the National Palace of giving the hired guns a list of people to execute, including opposition politicians, activists and certain named journalists. The Senator says he doesn’t know why the police have not released that information.

He says that other groups of these mercenaries are elsewhere, spread out, throughout Haiti. He notes they’re in the L’artibonite area and in the city of Les Cayes. He says these men were unleashed onto Haiti on the pretexts that the demonstrators would overrun the National Palace and the government hired them to stop this. He says these heavily armed mercenaries had hand grenades and other war weapons also, but not all are pictured in the police bust and arrest pictures. Deras says that these mercenaries are implicated in the shooting of many policemen during the various days of protests to weaken the Haiti police and Police Chief Michel-Ange Gedeon, in particular. (Tande in Kreyòl: “Career Mercenaries Hired to Kill Poor Haitians For Corrupt and Unpopular Government, February 18, 2019)

According to Desras, the three high level Jovenel Moise government executives, sent to pressure the police to free the mercenaries, are: Jean Roudy Aly, the Minister of Justice; Ardouin Zephirin, a presidential advisor and, Jean Fritz Jean Louis, the former Secretary of State. All are reported to have tried in vain “to bend the police to obtain the release of these foreign nationals apprehended with in their possession large arms, drones, pistols, a lot of license plates, bullet-proof vests, and other war equipment in the vicinity of the Central Bank of Haiti.” — Go to Rezo Nodwest for English translation and the original at – 3 personnalités du pouvoir auraient tenté de faire libérer les « mercenaires » étrangers arrêtés par la PNH )

Finally, the Senator confirms and its as also reported by Rezo Nordwest that, while the foreigners were in custody at the police station, at least one person filed a complaint against them which reveals

“that one of the two vehicles seized had been used by shooters who had fired on a group of protesters during this weekend.

What proof is there that the 7 mercenaries arrested may also form part of the white men pictured here?

These are questions yet to be satisfactorily answered by the Haiti authorities and judicial process. Unfortunately, the US. ambassador helped the accused mercenaries flee Haiti and did not let the Haitian judiciary do its job.