Death of the Author

19 Feb 2019 – On Valentine’s Day 2019, the Elon Musk-sponsored artificial intelligence lab OpenAI made a sensational announcement. It has created a groundbreaking AI system, entitled “GP2”, that is stunningly effective at generating prose news stories and fiction. So impressive were its results that the lab felt compelled to take the unusual step of not releasing it immediately, due to fears of malicious use. 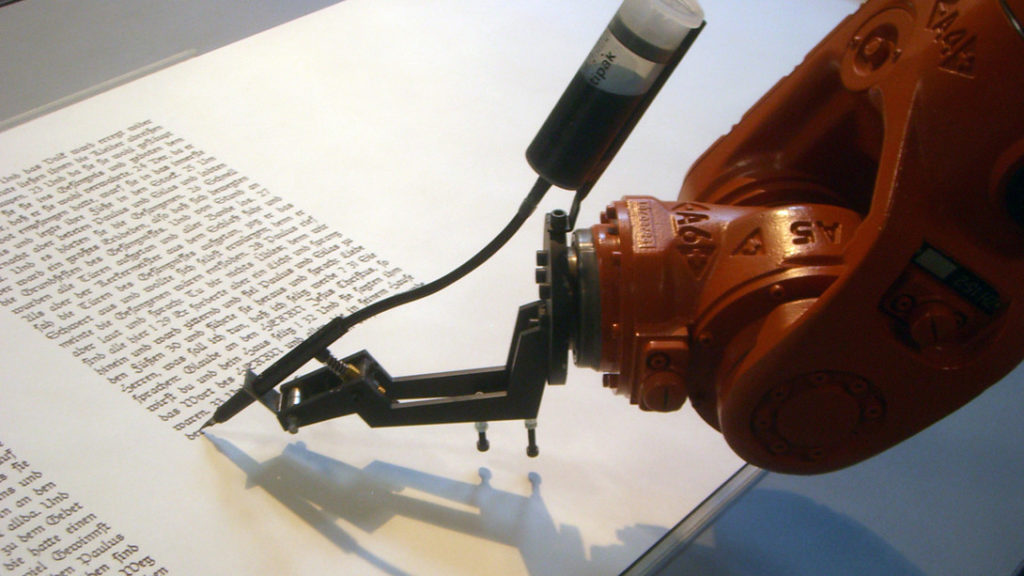 Users can input a sentence, such as a newspaper headline or an essay question, and the AI will produce a surprisingly convincing continuation.

For instance, when the first half of Jane Austen’s famous opening line for Pride and Prejudice (1813) is entered—“It is a truth universally acknowledged …”—the AI continues “…that when a nation is in a condition of civilization, that it is in great measure the business of its leaders to encourage the habits of virtue, and of industry, and of good order”. 1

The system’s continuation might not have the sparkle and concision of Austen’s original, but it does display a striking coherence, reading more like a slightly dull essay than the product of an algorithm. While it appears that that lab withheld the system primarily due to worries about unleashing a tsunami of fake news, another important question the system raises is: how might such a writing machine change literature?

Interestingly, this is a question that several writers have already explored. In his short story “The Great Automatic Grammatizator” (1954), Roald Dahl imagines a frustrated writer named Adolph Knipe inventing a machine that can mass produce short stories and novels. Knipe reasons: “Carpets…chairs…shoes…bricks…crockery…anything you like to mention—they’re all made by machinery now…And stories—well —they’re just another product”.

Within the first year of the machine’s operation, the Great Automatic Grammatizator produces at least half of all the novels and stories published in English. Knipe is careful to leave major literary writers untouched, but buys off most other real-life writers, forcing the rest into penury.

If Dahl’s vision is accurate, an AI system would exaggerate existing trends, creating a tiny global elite of writing superstars and undercutting and impoverishing the vast majority. As Knipe reflects: “The quality may be inferior, but that doesn’t matter. It’s the cost of production that counts.” 2

In addition to driving down costs and quality and pushing many writers into poverty, such a technology could aid totalitarian regimes. In his famous dystopian novel 1984 (1949) George Orwell imagines the novel’s lead female character Julia working “on the novel-writing machines in the Fiction Department”.

She runs and services a powerful electric motor into which general directives issued by the Planning Committee are fed and processed into works of fiction, later to be retouched by the Rewrite Squad. Like Knipe in Dahl’s story, Julia believes “Books were just a commodity that had to be produced, like jam or bootlaces.”3

As well as reducing literature to an object of mass production, such a writing machine gives the Party complete control over the ideas disseminated. For both Dahl and Orwell, then, a writing machine misses the most important aspect of literature—its capacity to reveal a unique perspective on the world.

However, we might ponder whether both Dahl and Orwell’s views reflect a misplaced romanticism about their chosen profession. After all, most human-written literature is relatively formulaic, relying on the reworking of a limited set of plots, tropes and characters.

Moreover, if we look back at history, literature has not always provided the voice of freedom. From Maxim Gorky’s support for Joseph Stalin to Knut Hamsun’s advocacy of Hitler, many talented writers have sided with dictatorship over democracy.

For every principled truth-teller like Orwell, we can name another writer whose fictional powers extended to outright fabrication. Think, for instance, of the recent case of Dan Mallory, the real name of bestselling A. J. Finn, who recently confessed to lying to friends and co-workers about, among other things, having cancer; his mother and brother dying; gaining an Oxford doctorate; working with Tina Fey; and discovering J. K. Rowling’s crime fiction. 4 As the latter example suggests, money, power and prestige have always provided potent literary inspirations.

If we bear in mind the mediocrity of lots of printed books, as well as the bad behavior of many writers, it might be that an automated writing system marks an improvement.

Right now, automated stories are proving useful in areas in which statistics are very important, such as baseball games and financial companies. 5

And already there exists a program that allows you to input your favorite stories for an algorithm to analyze. It will identify the structural features each of them share, allowing you to compose a perfect amalgamation of each of them. 6 Some might argue that such computer-assisted stories lack a human touch.

However, when researchers at Cambridge University showed automatically-generated verse to a group of poetry enthusiasts, the participants not only gave the highest overall quality rating to a machine-generated power, they also considered the generated poems to be more “human-like” than those actually written by real people.

A writing machine allows new novels, short stories and poems of every genre to be available virtually for free. It also allows for the creation of spontaneously-evolving fictions especially tailored to the reader—a literary version of a Facebook news feed or Amazon recommendations.

There are numerous occupations—from elevator operators to telegraphists—that have been rendered obsolete by new technologies. Why should writers be any different?

What such arguments miss, however, is the important role literature plays in presenting us with narratives that challenge our customary modes of thinking, revealing new and important ways of seeing the world beyond what we could previously imagine.

Gorky and Hamsun may have had political views that most of us could not now countenance. However, their writings did map previously uncharted aspects of human experience. Of course, lots of writing is formulaic—but effective writing remolds familiar genres, narratives and tropes in a fresh way. The main reason why, for instance, so-called “genre-writers” such as Raymond Chandler and Phillip K. Dick are so widely esteemed is that they developed their chosen forms in innovative directions.

Amazon recommendations are very good at alerting you to products extremely similar to the one you just have bought, but less useful in identifying something that revolutionizes your taste. In like manner, an algorithm-generated infinite novel may satisfy your immediate narrative desires, but unable to challenge your mental foundations.

By its very nature, any originality or profundity a writing machine displayed would be the result of fortuitous accident. Any revelations supplied by such a program would therefore still require a human being to recognize them.

An algorithm that can write spontaneously novels, short stories, plays and poems, then, is unlikely to obliterate human-written literature entirely. But it may still revolutionize literature.

The invention of photography, for instance, enabled more people than ever before to become involved in the creation of images, and provoked artists, from Pablo Picasso to Marcel Duchamp, to move radically beyond figurative representation. Likewise, a writing machine is likely to democratize literature, as well as to provoke writers to rethink their profession.

AI writing generators therefore mark not the end of the literary work but a new beginning. For literature professors such as myself, the more immediate nightmare may be: given the existence of an essay-writing algorithm that can evade the most sensitive of plagiarism detection programs, how can we grade student essays?

Alex Watson is Associate Professor in Comparative Literature and Cultural Theory at the Graduate School of Languages and Cultures at Nagoya University, Japan.