Deflagging of Refugee Rescue Ship a ‘Dark Moment’ for Europe 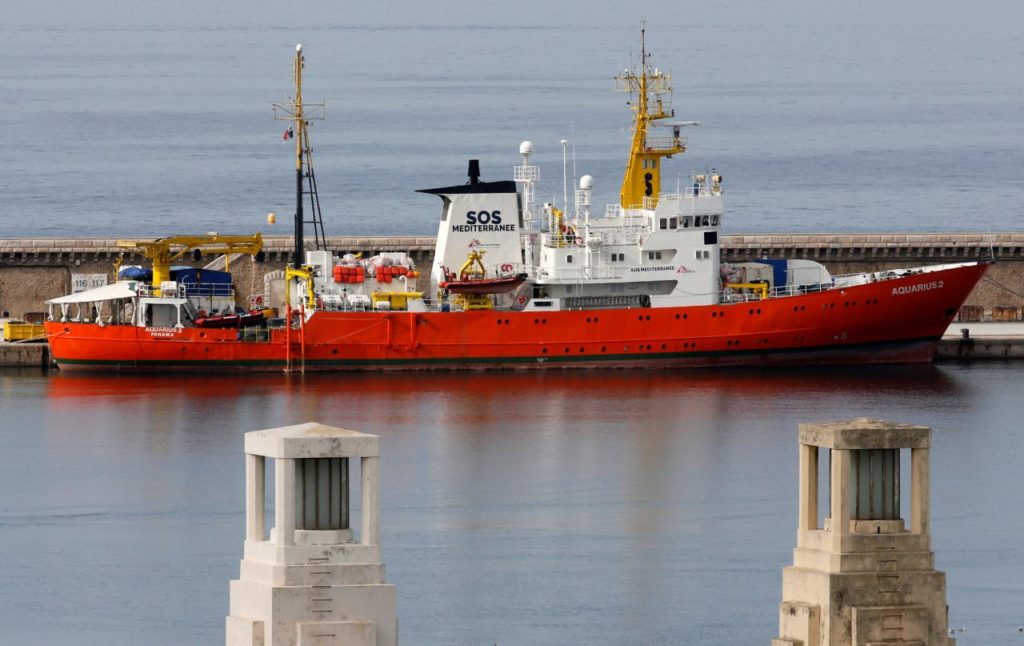 12 Feb 2019 – The deflagging of the Aquarius, the last migrant rescue ship in the Mediterranean, represents a “dark moment” in European history, setting a dangerous precedent for states to flout international humanitarian laws.

A report by the charity Human Rights at Sea (HRAS) cited “inconsistencies in reasoning” given by Gibraltar and Panama for revoking the flag of Aquarius, which it said had acted transparently.

The UK-based charity accused the flag states of putting commercial interests ahead of well-established obligations to save lives, and warned that it was “only a small step” for commercial vessels carrying out search and rescue operations to avoid taking those rescued to certain coastal states for political reasons.

The report coincides with a warning on Monday from the Med’s AlarmPhone network that 150 people, including pregnant women and children, were fleeing Libya in a boat with a broken-down engine.

It follows claims by the two charities operating the Aquarius, which has been unable to sail in the Mediterranean without a flag, that Panama’s maritime authority had bowed to “blatant economic and political” pressure from the Italian government to revoke its licence.

“We cannot allow this incident of the deflagging of the Aquarius to be swept under the carpet,” said David Hammond, the founder of HRAS. “When there is established rule of law at sea that includes humanitarian actions to rescue people at sea, you can’t play politics with that and you can’t put commercial interests before saving lives.”

Hammond said he had written to the International Maritime Organization. “We have asked the IMO to look at the issue, to see whether or or not the deflagging of the Aquarius is the start of a precedent of removing the ability of search and rescue vessels to operate lawfully at sea to save lives.”

The IMO told the Guardian that while it audited member states to determine how well they carried out their duties as flag states, it had no mechanism to look into individual cases of deflagging. International law was “clear” on the obligation of merchant ships to go to the rescue of people in distress at sea, it said.

A spokesman said: “When it comes to rescue of persons in distress at sea, under international law, ship masters have an obligation to render assistance, upon a distress call, and IMO member states have a complementary obligation to coordinate and cooperate so that persons rescued at sea are disembarked in a place of safety as soon as possible.”

The Aquarius, which was the last private rescue ship operating in the area used for crossings from Libya to Europe, was forced to halt its operations in December. More than 29,000 people are estimated to have been rescued by the ship, which has been the focus of a row over Europe’s approach to migration since Italy refused to allow it to dock on its shores in June.

Italy’s anti-immigration interior minister, Matteo Salvini, has denied that his government was behind the decision to deflag the Aquarius.

The HRAS said the deflagging had been political and went “against the fundamental human rights principles evolved after the brutal excesses of the second world war, which was triggered by the then-failure to curb and challenge far-right political movements in Europe.

“The drive for effective humanitarian policies and supporting actions in protecting individual rights is one of the core foundations at the heart of the European model, but at the time of writing and in the context of the central Mediterranean sea it is being eroded through appeasement, thereby undermining the established rule of law,” the report said.

The HRAS report concluded that Panama had “wrongly interpreted” the vessel’s obligations under international law when giving assistance at sea. It said the Italian authorities had “held some form and level of influence over the GMA [Gibraltar Maritime Authority] decision to seek to revoke the Aquarius registration”, which needed further investigation.

“Technical challenges to a flag registration should never be at the expense of, nor weighted more than, saving life at sea,” the report said.

Frédéric Penard, the head of operations at the SOS Méditerranée, the organisation operating the vessel alongside Médecins Sans Frontières (MSF), said: “This bolsters what we have been saying. It is an abuse of the interpretation of what the flag states should be regulating.

“We have been observing maritime law. Gibraltar and Panama have abused their power. It is a worrying development. At the moment there is no civilian rescue ship in the central Mediterranean.”

Karen McVeigh has been a senior news reporter for the Guardian since December 2006. Before that, she freelanced for the Times following a five-year stint as The Scotsman’s London correspondent