Laughing All the Way to Autocracy

Jokes can stop a society’s slide into dictatorship — but not if they focus on the vanities and quirks of the would-be dictators. 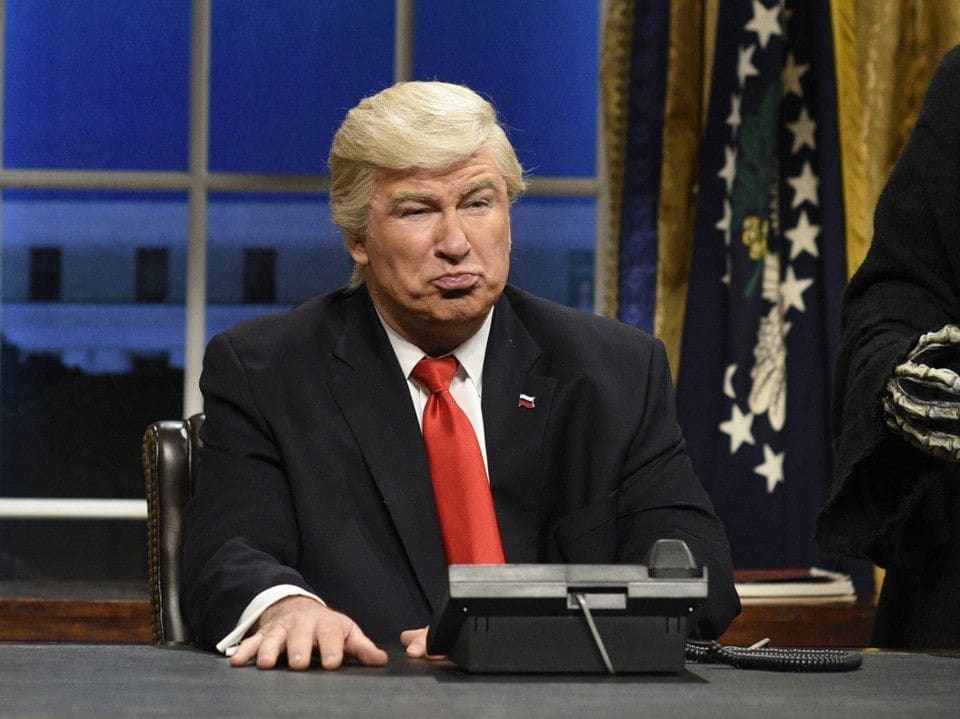 8 Feb 2019 – The crisis of democracy is no laughing matter. While some dictatorships like Myanmar are finally opening up, some of the world’s biggest powers appear to be shifting toward authoritarianism. Even the United States, home to a vibrant democracy and civil society, is in the headlines because of the autocratic rhetoric of its mercurial president. But what can we do to protect open societies from being drawn into the maelstrom of authoritarianism and closed ones from becoming more dictatorial?

In a recent interview with PBS, Mel Brooks, one of America’s oldest and greatest comedians and creator of the all-time classic movie The Producers, offered this opinion:

“The great thing about dictators is, you have to know, if you get on a soapbox with them, you’re gonna lose, because they have a way of spellbinding with their oratory. But if you can reduce them to ridicule, then you’re way ahead.”

Brooks believes that political humor turns the table on dictators, placing them in a demeaning position by subjecting them to ridicule. This has a subversive effect that undermines their authority, and, therefore, strips them of their power. And that gives comedians a silver bullet against authoritarians: jokes and laughter.

The only problem is that it isn’t true.

To see why Brooks’s argument doesn’t hold up, we can turn to Nazi Germany. There is an overwhelming amount of evidence suggesting that political humor flourished under Adolf Hitler’s rule; in fact, quips about the dictator and his henchmen were so widespread that they inspired collections of “whispered jokes” published after the war. The editors of these books were convinced that people who had poked fun at the Nazis were part of a tacit resistance. But in researching my own book Dead Funny: Telling Jokes in Hitler’s Germany, I discovered that, in fact, the opposite was true.

Berliners particularly loved jokes about their self-proclaimed Führer. “Absolutely everyone was telling them,” Carl Schulz, a wartime inhabitant of the German capital, told me in an interview. Yet the streets of Berlin were also the site of some of the war’s most vicious fighting. In some parts of the city, the Red Army had to literally fight house by house. If political humor helped undermine the morale of the Berliners, the effect was minuscule. Compared with the fear wielded by the SS and Gestapo, comedy dwindled into nothingness.

In fact, much of the humor — even the ostensibly satirical — may have contributed to keeping the regime in power.

Many of the jokes under the Third Reich were toothless. A typical example targeted Hermann Göring, Hitler’s portly second in charge:

Hermann Göring had his medals remodeled in rubber so he won’t have to take them off in the bathtub.

While these quips make fun of Göring’s vanity and love of decorations, they are only superficially critical of the man. Like many Göring jokes, the tone here is familial and affectionate rather than harsh. Ultimately, the imperial marshal comes across as a sort of pompous but likable Falstaff. His human weaknesses endeared him to the masses, making him one of the most popular leaders of his time. The jokes centered on his weight and vanity, not his callousness, brutality, or complicity in mass murder.

However, some jokes in 1930s Germany carried more bite:

Hitler visits a lunatic asylum, where the patients all dutifully perform the Nazi salute. Suddenly, Hitler sees one man whose arm is not raised. “Why don’t you greet me the same way as everyone else?” he hisses. The man answers: “My Führer, I’m an orderly, not a madman!”

Cutting quips like this one occasionally appear in 1930s court documents. Historian Meike Wöhlert analyzed the judgments handed down by courts with jurisdiction for “malicious acts” and treason. In 61 percent of cases, the joke-tellers were let off with a warning, and in most other cases small fines were handed down.

So why were the Nazis so uncharacteristically lenient when it came to punishing jokesters?

The rather unsettling answer may be that the Nazis realized that this type of humor helped consolidate their rule. In the claustrophobic confines of Hitler’s dictatorship, people needed to let off steam. If the masses vented their frustration by joking instead of taking to the streets, then that was in the political interest of the leadership.

Those who did in fact rebel against Hitler — the Stauffenbergs, Scholls, and Rote Kapelle activists, for example — were not the joking kind. They risked, and often lost, their lives in trying to defeat Nazism. It is hard to imagine Claus von Stauffenberg, the one-eyed war veteran, ever cracking trivial jokes.

Those who did in fact rebel against Hitler — the Stauffenbergs, Scholls, and Rote Kapelle activists, for example — were not the joking kind.

In fact, earnest people like him could well have been angered by such quips. For one, many of those jokes assumed the worst of humanity, whereas those willing to resist the regime assumed the best. As Alice Miller once said of Hans and Sophie Scholl: “Nearly all their peers were completely won over by the Führer, whereas Hans and Sophie had other, higher expectations of human nature, not shared by their comrades, against which they could measure Hitler.” Apart from their dark view of humanity, it is hard not to hear the defeatist undertone of many of the jokes circulating in the Third Reich. If anything, they implied that resistance was pointless. This one suggested that there was no opposition anymore, since everyone had become a Nazi:

[Nazi Labor Minister] Robert Ley visits a factory and, after taking a tour, asks the director about political views among the workforce. “Do you still have any Social Democrats?” “Yes, around 80 percent.” “What about Centrists?” “Sure, around 20 percent.” “But that means you don’t have any National Socialists?” “Of course we do. They’re all Nazis now.”

Some of the jokes even applauded Hitler’s policies, like the vote to leave, and thereby irrevocably damage, the League of Nations (a predecessor of the United Nations):

During a meeting of the League of Nations in Geneva, a package was delivered containing the note: “For distribution and use.” The package was full of nooses.

The Nazi rulers had their own type of cruel humor, like the fact that defendants in the Volksgerichtshof, Germany’s notorious kangaroo court, had to appear in the stand without belts so they were forced to hold up their trousers.

Meanwhile, even some of the darkest and outwardly most critical jokes told toward the end of the war were defeatist — but in a way that suggested the teller’s own helplessness:

Q: Hitler, Göring, and Goebbels are on a boat and get caught in a storm. The boat sinks. Who is saved?

While the joke wishes death to the leaders, it is not a revolution that kills them but the blind hand of nature.

The jokes under other dictatorships of that era were strikingly similar — the Soviet Union, too, had its own brand of resigned humor. Told over and over again, quips like the following normalized the corruption and complaisance of the Soviet system, transforming the incompetence and crass brutality of its authorities into a basic fact of life:

Q: How do you relate to the Soviet government?

A: Like a wife: part habit, part fear — and wish to God I had a different one.

A Frenchman, a Brit, and a Russian are admiring a painting of Adam and Eve in the Garden of Eden. The Frenchman says, “They must be French; they’re naked, and they’re eating fruit.” The Englishman says, “Clearly, they’re English — observe how politely the man is offering the woman the fruit.” The Russian notes, “They are Russian, of course. They have nothing to wear, nothing to eat, and they think they are in paradise.”

Unfortunately, Brooks’s idea that humor might act as a sharp weapon against dictators is based on just that sort of wishful thinking. Authoritarians are not toppled by seeming ridiculous; rather, they force others into compliance with their own deranged view of the world, from Turkmen dictator Saparmurat Niyazov’s renaming of the months after himself and his family to Rafael Trujillo’s insistence that Dominican churches list “God in heaven, Trujillo on earth.”

But that doesn’t mean we should dismiss political humor altogether. In a democracy, jokes can help shape public opinion in a way they can’t under authoritarianism.

In the West, shows like Saturday Night Live may have an important role to play. Satire and comedy can help stop the slippage toward totalitarianism — but only as long as they ruthlessly target policies, not just the vanity or quirks of the mighty. One might argue that such programs are “preaching to the converted,” but even if that were the case, they also help mobilize the opposition and rally it against authoritarian tendencies. A joke shared through the media has so much more value than a whispered one. It not only exposes the authoritarian leader to public ridicule, but it can also establish a sense of community, as well as strong oppositional figures who might challenge his or her rule. Ultimately, this strengthens civil society and can translate either into votes or calls for action.

Satire and comedy can help stop the slippage toward totalitarianism — but only as long as they ruthlessly target policies.

But comedy in a democracy also risks being mistaken for real resistance. An atmosphere where mockery becomes normal, and where all sides are caricatured and satirized, is reassuring in some ways. It lets us know that things are still OK, that our protections are still in place. But it can also be a distraction if we end up substituting Twitter jokes and sharing sketches for real action. We can laugh at the ridiculousness of the powerful — as long as we can still remember when to get serious.

Rudolph Herzog is a filmmaker and author of Dead Funny: Humor in Hitler’s Germany.