This “U.S. coup manual,” recently highlighted by WikiLeaks, serves as a reminder that the so-called “independence” of such financial institutions as The World Bank and IMF is an illusion and that they are among the many “financial weapons” regularly used by the U.S. government to bend countries to its will. 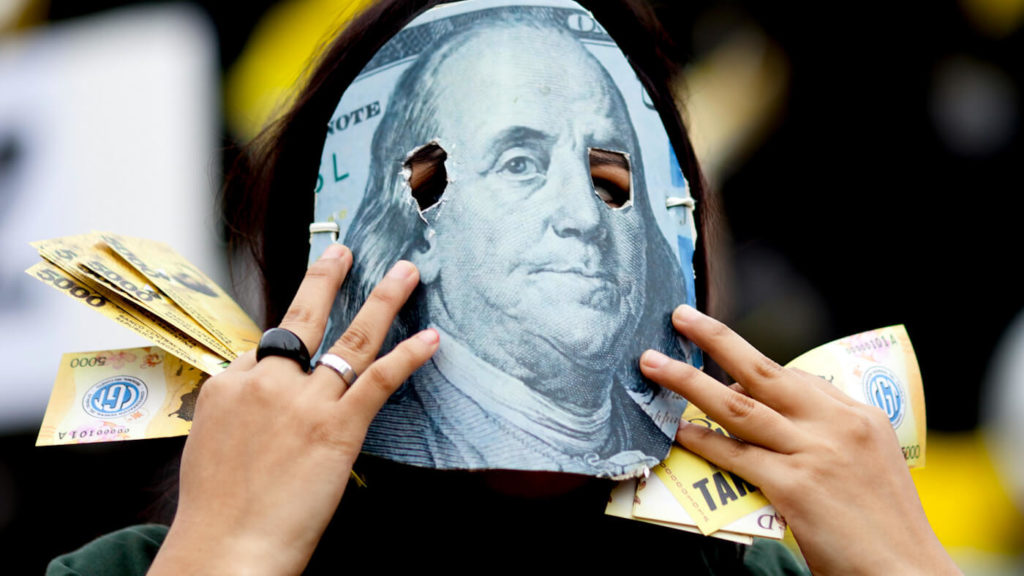 A masked demonstrator wearing a detail of a 100 U.S. dollar bill protests the government’s plans to make a deal with the IMF and increase the price of utilities such as gas and electricity in Buenos Aires, Argentina, May 14, 2018. Natacha Pisarenko | AP

7 Feb 2019 – In a leaked military manual on “unconventional warfare” recently highlighted by WikiLeaks, the U.S. Army states that major global financial institutions — such as the World Bank, International Monetary Fund (IMF), and the Organization for Economic Cooperation and Development (OECD) — are used as unconventional, financial “weapons in times of conflict up to and including large-scale general war,” as well as in leveraging “the policies and cooperation of state governments.”

The document, officially titled “Field Manual (FM) 3-05.130, Army Special Operations Forces Unconventional Warfare” and originally written in September 2008, was recently highlighted by WikiLeaks on Twitter in light of recent events in Venezuela as well as the years-long, U.S.-led economic siege of that country through sanctions and other means of economic warfare. Though the document has generated new interest in recent days, it had originally been released by WikiLeaks in December 2008 and has been described as the military’s “regime change handbook.”

WikiLeaks’ recent tweets on the subject drew attention to a single section of the 248-page-long document, titled “Financial Instrument of U.S. National Power and Unconventional Warfare.” This section in particular notes that the U.S. government applies “unilateral and indirect financial power through persuasive influence to international and domestic financial institutions regarding availability and terms of loans, grants, or other financial assistance to foreign state and nonstate actors,” and specifically names the World Bank, IMF and The Organisation for Economic Co-operation and Development (OECD), as well as the Bank for International Settlements (BIS), as “U.S. diplomatic-financial venues to accomplish” such goals.

The manual also touts the “state manipulation of tax and interest rates” along with other “legal and bureaucratic measures” to “open, modify or close financial flows” and further states that the U.S. Treasury’s Office of Foreign Assets Control (OFAC) – which oversees U.S. sanctions on other nations, like Venezuela — “has a long history of conducting economic warfare valuable to any ARSOF [Army Special Operations Forces] UW [Unconventional Warfare] campaign.”

This section of the manual goes on to note that these financial weapons can be used by the U.S. military to create “financial incentives or disincentives to persuade adversaries, allies and surrogates to modify their behavior at the theater strategic, operational, and tactical levels” and that such unconventional warfare campaigns are highly coordinated with the State Department and the Intelligence Community in determining “which elements of the human terrain in UWOA [Unconventional Warfare Operations Area] are most susceptible to financial engagement.”

The role of these “independent” international financial institutions as extensions of U.S. imperial power is elaborated elsewhere in the manual and several of these institutions are described in detail in an appendix to the manual titled “The Financial Instrument of National Power.” Notably, the World Bank and the IMF are listed as both Financial Instruments and Diplomatic Instruments of U.S. National Power as well as integral parts of what the manual calls the “current global governance system.”

Furthermore, the manual states that the U.S. military “understand[s] that properly integrated manipulation of economic power can and should be a component of UW,” meaning that these weapons are a regular feature of unconventional warfare campaigns waged by the United States.

Another point of interest is that these financial weapons are largely governed by the National Security Council (NSC), which is currently headed by John Bolton. The document notes that the NSC “has primary responsibility for the integration of the economic and military instruments of national power abroad.”

Though the unconventional warfare manual is notable for stating so openly that “independent” financial institutions like the World Bank and the IMF are essentially extensions of U.S. government power, analysts have noted for decades that these institutions have consistently pushed U.S. geopolitical goals abroad.

Indeed, the myth of World Bank and IMF “independence” is quickly eroded by merely looking at the structure and funding of each institution. In the case of the World Bank, the institution is located in Washington and the organization’s president has always been a U.S. citizen chosen directly by the president of the United States. In the World Bank’s entire history, the institution’s Board of Governors has never rejected Washington’s pick.

This past Monday, it was reported that President Donald Trump nominated former Bear Stearns economist David Malpass to lead the World Bank. Malpass had famously failed to foresee the destruction of his former employer during the 2008 financial crisis and is likely to limit World Bank loans to China and to countries allied or allying with China, given his well-established reputation as a China hawk.

In addition to choosing its president, the U.S. is also the bank’s largest shareholder, making it the only member nation to have veto rights. Indeed, as the leaked unconventional warfare manual notes, “As major decisions require an 85% supermajority, the United States can block any major changes” to World Bank policy or the services it offers. Furthermore, the U.S. Treasury Secretary, former Goldman Sachs banker and “foreclosure king,” Steve Mnuchin, functions as the World Bank’s governor.

Though the IMF is different from the World Bank in several respects, such as its stated mission and focus, it too is largely dominated by U.S. government influence and funding. For instance, the IMF is also based in Washington and the U.S. is the company’s largest shareholder — the largest by far, owning 17.46 percent of the institution – and also pays the largest quota for the institution’s maintenance, paying $164 billion in IMF financial commitments annually. Though the U.S. does not choose the IMF’s top executive, it uses its privileged position as the institution’s largest funder to control IMF policy by threatening to withhold its IMF funding if the institution does not abide by Washington’s demands. 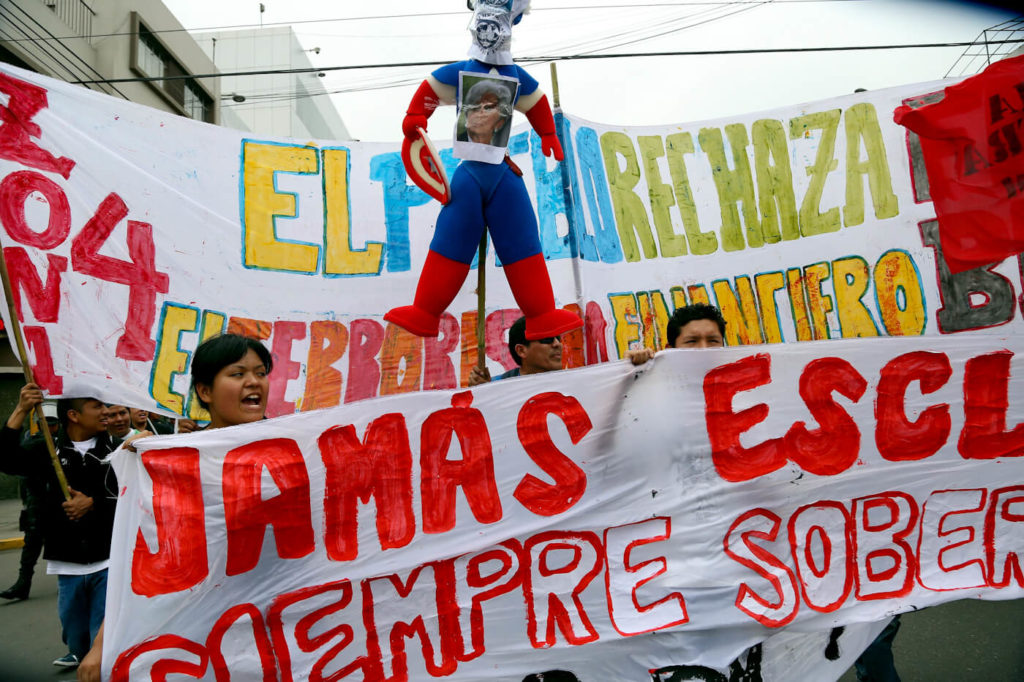 Protestors hold an effigy of Captain America with a photo of IMF Director Christine Lagarde during meetings by the IMF and World Bank in Lima, Peru, Oct. 9, 2015. Geraldo Caso Bizama | AP

As a consequence of the lopsided influence of the U.S. on these institutions’ behavior, these organizations have used their loans and grants to “trap” nations in debt and have imposed “structural adjustment” programs on these debt-saddled governments that result in the mass privatization of state assets, deregulation, and austerity that routinely benefit foreign corporations over local economies. Frequently, these very institutions – by pressuring countries to deregulate their financial sector and through corrupt dealings with state actors – bring about the very economic problems that they then swoop in to “fix.”

Given the close relationship between the U.S. government and these international financial institutions, it should come as little surprise that – in Venezuela – the U.S.-backed “interim president” Juan Guaidó – has already requested IMF funds, and thus IMF-controlled debt, to fund his parallel government.

This is highly significant because it shows that top among Guaidó’s objectives, in addition to privatizing Venezuela’s massive oil reserves, is to again shackle the country to the U.S.-controlled debt machine.

As the Grayzone Project recently noted:

Venezuela’s previous elected socialist president, Hugo Chávez, broke ties with the IMF and World Bank, which he noted were “dominated by US imperialism.” Instead Venezuela and other left-wing governments in Latin America worked together to co-found the Bank of the South, as a counterbalance to the IMF and World Bank.”

However, Venezuela is far from the only country in Latin America being targeted by these financial weapons masquerading as “independent” financial institutions. For instance, Ecuador – whose current president has sought to bring the country back into Washington’s good graces – has gone so far as to conduct an “audit” of its asylum of journalist and WikiLeaks publisher Julian Assange in order to win a $10 billion bailout from the IMF. Ecuador granted Assange asylum in 2012 and the U.S. has fervently sought his extradition for still sealed charges ever since.

In addition, last July, the U.S. threatened Ecuador with “punishing trade measures” if it introduced a measure at the UN to support breastfeeding over infant formula, in a move that stunned the international community but laid bare the willingness of the U.S. government to use “economic weapons” against Latin American nations.

Beyond Ecuador, other recent targets of massive IMF and World Bank “warfare” include Argentina, which awarded the largest IMF bailout loan in history just last year. That loan package was, unsurprisingly, heavily pushed by the U.S., according to a statement from Treasury Secretary Mnuchin released last year. Notably, the IMF was instrumental in causing the complete collapse of the Argentinian economy in 2001, sending a poor omen for last year’s approval of the record loan package.

Though it was released over a decade ago, this “U.S. coup manual” recently highlighted by WikiLeaks serves as a salient reminder that the so-called “independence” of these financial institutions is an illusion and that they are among the many “financial weapons” regularly used by the U.S. government to bend countries to its will and even overthrow U.S.-disfavored governments.