A two-day international conference is urging collective and decisive action against Myanmar. 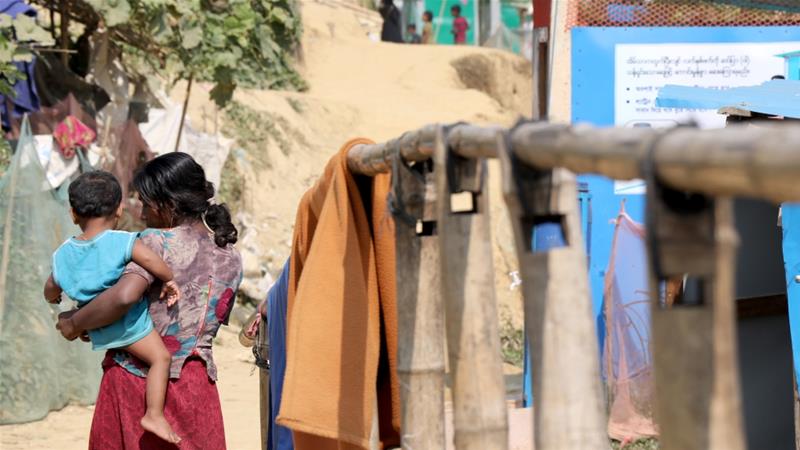 Attacks on the Rohingya in 2017 left thousands dead and forced more than 700,000 people to flee to Bangladesh. [File: Kaan Bozdogan/Anadolu]

9 Feb 2019 – – The question of justice has dominated discussions at a New York conference on the persecution suffered by the Rohingya Muslim minority in Myanmar.

Panellists, including international legal experts, Rohingya refugees, members of the diaspora and human rights activists, packed the James Room of Bernard College at Columbia University on Friday and Saturday, calling on the international community to take collective and decisive action against the Myanmar government.

The Rohingya minority in Myanmar, long considered the most persecuted minority in the world, has faced relentless attacks on their lives and property over the last seven years.

In 2017, these attacks left thousands dead and forced more than 700,000 to flee to neighbouring Bangladesh.

Without the spectre of accountability or justice, the atrocities would simply multiply, according to Tun Khin, president of the Burmese Rohingya Organization UK.

“The people in the [refugee] camps want justice. This is the first thing they told me,” Tun Khin told Al Jazeera on the sidelines of the conference which was organised by the Free Rohingya Coalition (FRC).

“If there is no accountability, the oppression will continue. Why would the military stop if they know there will be no consequences for their actions?

“And if the Rohingya are to return to Myanmar, their safety has to be guaranteed. We are facing an existential threat.”

Gregory Stanton, from Genocide Watch, told the conference that the Rohingya-minority, who continue to suffer intimidation, murder and displacement, deserved protection, justice and ultimately reparation.

“Those who have been victims of genocide need reparations so they can resettle their lives,” said Stanton.

“Take their names [of the military officers], gather the evidence … because they will be out in the dock [eventually].”

The call for accountability and justice for what has transpired in the northern Rakhine state of Myanmar is not new.

In August 2018, the UN independent international fact-finding mission released a 440-page account of the situation in three states in Myanmar.

The report called for an “investigation and prosecution of Myanmar’s Commander-in-Chief Senior General Min Aung Hlaing, and his top military leaders for genocide, crimes against humanity and war crimes.”

Myanmar’s government has repeatedly rejected the allegations in the UN report.

Radhika Coomaraswamy, a member of the UN team that wrote the report, told Al Jazeera that though it was unlikely that the report would move the UN Security Council (UNSC) to refer Myanmar to the International Criminal Court (ICC), the mechanisms were in place for the cases to move forward.

“We have now set up prosecutorial mechanisms that will create prosecutorial files of these generals and others involved and so on,” said Coomaraswamy.

“When it comes to the Security Council, you never know. If there’s sufficient pressure, it can happen,” added Coomaraswamy, a lawyer and former UN special rapporteur on violence against women and UN special representative for children and armed conflict.

The ICC opened a preliminary examination into Myanmar’s crimes against the Rohingya minority in September 2018.

But Stanton, from Genocide Watch, said that even if the prospects of holding officials accountable in an international court were slim, it had to be pursued.

In his remarks, via a pre-recorded video message, Yanghee Lee, the UN special rapporteur for Myanmar, told attendees at the conference that she was troubled to hear reports the Myanmar military was building new bases in the Rakhine state.

“Democratic space, including the freedom of speech and association, is ever fragile, and communities across the country remain divided along religious and ethnic lines,” said Lee.

Yasmin Ullahi, a Rohingya activist based in Canada, told Al Jazeera that the Rohingya had effectively lost a generation of children to refugee camps where they will struggle for education, sufficient food, later employment and a stable future.

Tun Khin, the UK-based activist, said that though the conference was focused primarily on the Rohingya minority, it would be a miss for activists to ignore the fact that all minorities faced erasure under the current Myanmar leadership.

“This is not just about the Rohingya. It is about the brutality of all minorities,” he said.

Likewise, Alex Hinton, UNESCO chair in genocide prevention, said that for action to be taken, there needed to be political will.

“There needs to be political will. We need to personalise the stories so that people will [be] taken to action,” Hinton told the attendees.

A number of panellists, including Stanton from Genocide Watch, reserved strong criticism for the role of Facebook, in the dissemination of hate-speech ahead of the events of 2017.

Facebook was criticised for failing to put a halt to the hate speech and for allowing murderous sentiment to spread. Late last year, Facebook admitted they “weren’t doing enough to help prevent our platform from being used to foment division and incite offline violence.”