19 Feb 2019 – The scandal regarding the fake hospital video published by the White Helmets as a proof of the Douma chemical attack has reached its peak in the media and has caused reaction on the diplomatic level. 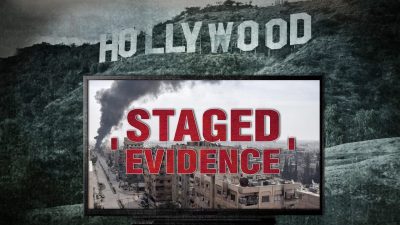 On February 13, BBC Syria’s producer Riam Dalati came out with a statement that “After almost 6 months of investigations”  “[I] can prove without a doubt that the Douma Hospital scene was staged” and “no fatalities had occurred in the hospital.” Dalati added that he believes that “the attack did happen” but no Sarin was used and “everything else around the attack was manufactured for maximum effect.”

“I can tell you that Jaysh al-Islam ruled Douma with an iron fist. They coopted activists, doctors and humanitarians with fear and intimidation. In fact, one of the 3 or 4 people filming the scene was Dr. Abu Bakr Hanan, a “brute and shifty” doctor affiliated with Jaysh Al-Islam. The narrative was that “there weren’t enough drs [doctors]” but here is one filming and not taking part of the rescue efforts. Will keep the rest for later,” he wrote in a tweet chain on the topic.

An interesting fact that despite the confidence that the attack did take place and no Sarin was used, Dalati was not able to name the chemical substance used and said that it is up to the OPCW to make conclusions.

Even this halfway contradiction to the “Assad did it” version caused a wide attention because BBC was among the mainstream media organizations fueling anti-Assad hysteria when the video first appeared in April 2018. This joint propaganda effort became a formal justification of the US-led cruise missile attack on Syria.

Dalati’s statement widely circulated independent media organizations and was even commented by the Russian defense and foreign ministries. Foreign Ministry Spokeswoman Maria Zakharova described the revelation as a “theater of absurd.”

“Over the past years, and not only in Syria, we have seen just a tragic farce performed by the Western community and mass media, which on the one hand, speak about the high democratic goals and how they care about the civilians of a sovereign state, and on the other hand, they just do not give a damn about all laws, the international law, freedoms and rights of a nation and certain people,” Zakharova stressed.

She compared this case with the situation developing around Iraq prior to the start of the US intervention and recalled how then US ambassador to the UN Colin Powell was convincing the international community that there is a need to rescue “Iraq, Iraqi nation and democracy”.

The Russian Defense Ministry also commented on the issue by saying that Russia is not surprised by the appearance of new discrediting details.

“Many of today’s top-ranking politicians in the United States and Europe, then tearing their throats in ‘defending the peaceful Syrians from the terrible chemical attacks of the regime” and sanctioning missile and air strikes on Syria, will try to forget the topic in order to avoid moral, political and criminal liability,” defense ministry spokesman Major General Igor Konashenkov said.

An interesting fact is that mainstream media outlets and Western diplomats in fact ignored this situation. Furthermore, BBC officially stated that its Syria producer acted on his own and his claims are “personal opinions”, distancing itself from his conduct.

The Douma attack was not the first and only case when studio work was presented by the US-led block as a decisive evidence justifying its actions in the conflict. After the April 2017 attack in Khan Shaykhun, experts voiced concern that the video released by the White Helmets as a proof of the chemical attack conducted by the Assad regime was staged.

In fact, weaponized disinformation campaigns, staged videos and fake news are common approaches used by the US military and special services to promote their own agenda around the world. The US was actively using these tools during its intervention in Iraq and after it.

According to the later revelations, the employed programs were varying from placing Pentagon-provided articles in Iraqi newspapers as “unbiased news” to producing footage, which were made to look as if they had been “created by Arabic TV,” and CDs with fake al-Qaeda videos, which then distributed through various channels.

The employed propaganda approaches are constantly evolving. Therefore, propaganda coverage of the conflict in Syria has some differences with those which were observed in Iraq. Now, mainstream media, the Pentagon, the intelligence services and diplomats are actively using Hollywood-style approaches. This style of the coverage is based on providing catchy, even if horrible, pictures and videos influencing the emotions of the audience rather than convincing it with logical conclusions.

Just like with Hollywood movies, the mainstream news has increasingly been turning away from the logical narration of stories with realistic motivations to emotional judgements based on anonymous sources, non-verified images, pocket citizen journalists and even open speculation. The content developed within the framework of this approach is usually based on the results of social and psychological research. This allows results to be maximised by the targetted development of content and appropriate segmentation of the audience. An interesting and successful example of this audience reaction modelling can be seen in the mainstream media coverage of the Salisbury incident, which gave rise to large-scale hysteria in Western countries about Russian spies.

Considering that US defense officials openly admit that the Pentagon, as well as other institutions, are going to develop their influencing tools and irregular warfare capabilities further, it should be expected that the intensity and sophistication of disinformation campaigns waged around the globe will continue to increase.