Manning will remain in custody until she agrees to testify or until the grand jury ends its work.

8 Mar 2019 – Army whistleblower Chelsea Manning was jailed today after refusing to answer questions from a federal grand jury in Virginia looking into the release of documents to WikiLeaks.

U.S. District Judge Claude Hilton told Manning that she would remain in federal custody “until she purges or the end of the life of the grand jury,” a statement from her representatives said.

Manning told reporters earlier in the day that she was prepared to go to jail following the closed contempt hearing.

On Wednesday, Manning appeared before the same grand jury, in the U.S. District Court for the Eastern District of Virginia, but refused to answer any questions. 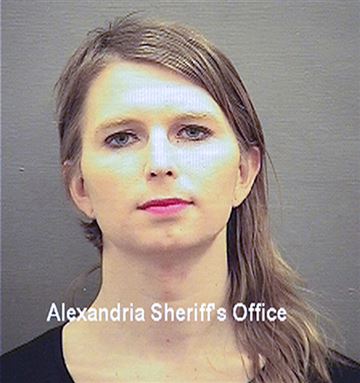 “I responded to each question with the following statement: ‘I object to the question and refuse to answer on the grounds that the question is in violation of my First, Fourth, and Sixth Amendment, and other statutory rights,” Manning said in a statement.

“All of the substantive questions pertained to my disclosures of information to the public in 2010 — answers I provided in extensive testimony, during my court-martial in 2013,” the statement said.

Manning was sentenced to 35 years in prison for leaking a trove of military intelligence records to the anti-secrecy website Wikileaks. Her sentence was commuted by President Barack Obama in 2017 after seven years behind bars.

Her representatives wanted the government to order her confined to home as a result of a recent operation — ostensibly a gender-reassignment procedure that was reported in the fall — and her need for prescription drug treatment.

The government argued that the William G. Truesdale Adult Detention Center, run by the sheriff of Alexandria, Virginia, could handle Manning’s medical needs.

McCormick said Manning would be housed with women, but she otherwise gave no specific guarantees and said one unspecified drug would be out of the question.

“They have no issue with the prescribed hormones needed,” the prosecutor said, referring to the jail’s medical staff. “They do have an issue with the narcotic because that is just not allowed in a detention center.”

Alexandria Sheriff Dana Lawhorne said in a statement, “We will work closely with the U.S. Marshals to ensure her proper care while she remains at our facility.”

On Tuesday, a judge in the Eastern District of Virginia denied a motion filed by Manning’s attorneys challenging a subpoena calling her to testify, according to her lawyers.

Manning told The Associated Press that she didn’t know what case was about.

“I just know there were an awful lot of government lawyers there,” she said Tuesday after her motion was denied.

“Grand juries are terrible, to say the least,” Manning, 31, added.

“Grand juries operate in secret, allowing the government to retaliate against activists and dissidents behind closed doors,” said a statement from the committee released by Manning’s lawyers.

“Donald Trump and his administration have publicly declared their disdain for Chelsea, and for President Obama’s decision to commute her sentence,” the Chelsea Resists! statement said. “Chelsea has stood by the testimony from her 2013 court-martial, and this subpoena serves no legitimate purpose. It is a punitive effort to reverse Obama’s legacy, exposing Chelsea to legal hardship and possible imprisonment.”

Pete Williams is an NBC News correspondent who covers the Justice Department and the Supreme Court, based in Washington.

Elisha Fieldstadt is a breaking news reporter for NBC News.