10 Mar 2019 – The narrative seemed to fit Venezuela’s authoritarian rule: Security forces, on the order of President Nicolás Maduro, had torched a convoy of humanitarian aid as millions in his country were suffering from illness and hunger.

Vice President Mike Pence wrote that “the tyrant in Caracas danced” as his henchmen “burned food & medicine.” The State Department released a video saying Mr. Maduro had ordered the trucks burned. And Venezuela’s opposition held up the images of the burning aid, reproduced on dozens of news sites and television screens throughout Latin America, as evidence of Mr. Maduro’s cruelty.

But there is a problem: The opposition itself, not Mr. Maduro’s men, appears to have set the cargo alight accidentally.

Unpublished footage obtained by The New York Times and previously released tapes — including footage released by the Colombian government, which has blamed Mr. Maduro for the fire — allowed for a reconstruction of the incident. It suggests that a Molotov cocktail thrown by an antigovernment protester was the most likely trigger for the blaze.

At one point, a homemade bomb made from a bottle is hurled toward the police, who were blocking a bridge connecting Colombia and Venezuela to prevent the aid trucks from getting through.

But the rag used to light the Molotov cocktail separates from the bottle, flying toward the aid truck instead.

Half a minute later, that truck is in flames.

The same protester can be seen 20 minutes earlier, in a different video, hitting another truck with a Molotov cocktail, without setting it on fire. 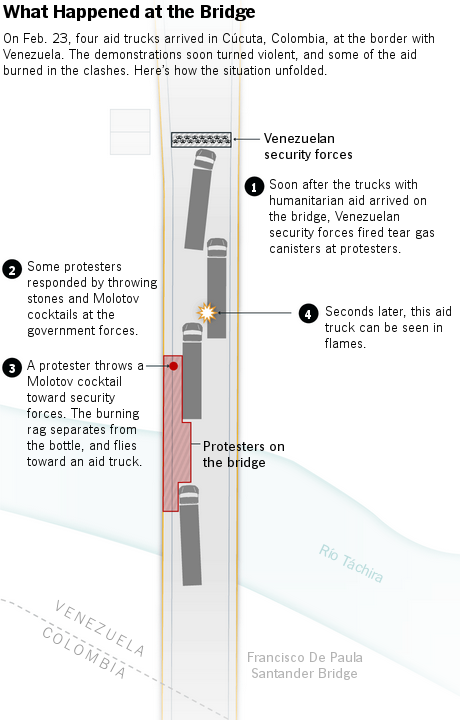 The burning of the aid last month has led to broad condemnation of the Venezuelan government.

More than three million people have fled the country because of the humanitarian crisis caused by Mr. Maduro’s mismanagement of the economy. Political opponents who have remained in the country face repression by his security forces, with many jailed, tortured or forced into exile. Many demonstrators have been killed and even more injured during street protests.

Many of Mr. Maduro’s critics claim that he ordered medication set on fire during the border standoff — even though many of his people have died of medicine shortages in hospitals.

Yet the claim about a shipment of medicine, too, appears to be unsubstantiated, according to videos and interviews.

The United States Agency for International Development, the principal supplier of the aid at the bridge, did not list medicine among its donations. A top opposition official on the bridge that day told The Times that the burned shipment contained medical supplies like face masks and gloves, but not medicine. And video clips reviewed by The Times show some of the boxes contained hygiene kits, which the Americans identified as containing supplies like soap and toothpaste.

Yet the claim that Mr. Maduro burned medicine has persisted.

“Maduro has lied about the humanitarian crisis in Venezuela, he contracts criminals to burn food and medicine intended for the Venezuelan people,” wrote John R. Bolton, President Trump’s national security adviser, in a message posted on Twitter on March 2.

After being contacted by The Times about these claims, American officials released a statement describing how the fire began more cautiously.

“Eyewitness accounts indicate that the fire started when Maduro’s forces violently blocked the entry of humanitarian assistance,” the statement said. It did not specify that Mr. Maduro’s forces lit the fire.

American officials also noted that, whatever the circumstances, they held Mr. Maduro responsible because he blocked the aid trucks that day, punishing Venezuelans in need.

“Maduro is responsible for creating the conditions for violence,” said Garrett Marquis, a spokesman for the National Security Council. “His thugs denied the entry of tons of food and medicine, while thousands of courageous volunteers sought to safeguard and deliver aid to Venezuelan families.”

The aid shipment created a showdown unlike any on the border between Colombia and Venezuela in years.

On Feb. 23, Venezuela’s opposition planned to pierce a military blockade by Mr. Maduro, hoping that the president’s security forces would break with him rather than stop much-needed aid. They argued that a cascade of defections in the military would follow, eventually toppling the government.

Instead, Mr. Maduro’s security forces, along with government-aligned gangs, attacked protesters, who came armed with rocks and Molotov cocktails. One of the aid trucks burned in the melee, igniting the bitter war of words over who was responsible.

Mr. Maduro’s government has also made unsubstantiated claims, starting with its longstanding insistence that there are no food shortages in Venezuela.

It also claimed that the aid shipment contained expired supplies or American weapons.

But one claim that appears to be backed up by video footage is that the protesters started the fire.

“They tried a false flag operation, that supposedly the people of Venezuela had burned a truck carrying rotten food — no, no, no — it was they themselves, it was the criminals of Iván Duque,” Mr. Maduro told a crowd, referring to Colombia’s president.

The day of the convoy, Colombia’s government quickly became a chief booster of the theory that Mr. Maduro had been behind the fire. Vice President Marta Lucía Ramírez posted a picture of what she said was “one of the trucks incinerated by gangs by order of Maduro.”

The footage was edited to show circles around Venezuelan security forces throwing tear gas canisters, which explode on impact, toward the aid convoy. Subsequent images show the truck erupting into smoke, implying that it was the Venezuelan officials who were responsible.

But the footage distributed by the Colombian government removes the 13-minute period before the fire begins. Officials from Mr. Duque’s office did not release the full video after repeated requests from The Times.

Protesters who threw Molotov cocktails from the bridge insisted that Mr. Maduro’s forces, not their homemade bombs, set the fire.

Junior José Quevedo, 23, said he had arrived at 7 a.m. that day and tried to talk policemen into allowing the aid to pass. “But then another armed group came of colectivos,” he said, referring to government-aligned gangs.

Adalberto Rondón, another bomb thrower on the bridge that day, said it was national guardsmen who lit the fire.

The same account was widely picked up that day by American officials.

“Each of the trucks burned by Maduro carried 20 tons of food and medicine,” Senator Marco Rubio wrote on Twitter, repeating a claim posted by a Colombian news network that was on the scene. “This is a crime and if international law means anything he must pay a high price for this.”

Contacted by The Times about the footage Saturday, a spokesman for Mr. Rubio did not address who burned the trucks, saying in a statement that “Maduro bears full responsibility for the destruction of humanitarian aid.”

Juan Guaidó, the leader of Venezuela’s opposition, has fervently maintained that the aid contained medicine and that it was burned by Mr. Maduro as well.

When contacted by The Times on Thursday about possible contradictory information on what the truck contained, Edward Rodríguez, a spokesman for Mr. Guaidó, said he “didn’t have the exact information” and referred questions to Gaby Arellano, a lawmaker in charge of the aid distribution.

Ms. Arellano could not be reached for comment this past week. But when interviewed by The Times on the bridge shortly after the truck burned on Feb. 23, Ms. Arellano said the truck was not carrying any medicine.

“There were face masks, syringes, gloves, the things that you use in an operating room,” she said.

“Tear gas bombs, when they fall they throw out a spark,” she said. “Since there were boxes, when the first one fell, it set everything on fire.”

Asked if it had been done on purpose, she said: “There couldn’t be any other reason, could there? The world is here, it was all recorded live by the media. There’s even videos where you can see it all happening.”

A version of this article appears in print on March 11, 2019, on Page A1 of the New York edition with the headline: Maduro Burned Aid? Footage Shows Otherwise.