Just to be clear, this means that more desperate people crossed the Red Sea into Yemen in 2018 than crossed the Mediterranean heading for Europe. 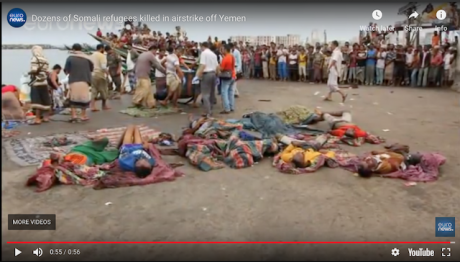 19 Feb 2019 – While Brexit is giving UK residents a break from media focus on desperate people attempting to reach wealthy Europe by crossing the Mediterranean by sea, a few figures should help to put things in perspective, as the issue will surely soon re-emerge in the headlines.

Xenophobia remains a fundamental rallying cry of the right throughout Europe, including the UK, and is all too frequently manifested through Islamophobic populism. This has already led to the implementation of anti-migrant policies by most regimes but particularly the far right ones in Eastern Europe.

This last year, they have been joined by the new Italian regime’s rhetoric and action in turning away humanitarian ships rescuing migrants in the Mediterranean. The hostile environment for migrants in Europe has led to a massive drop in arrivals: while many more than one million people arrived in 2015, only 144,000 did so in 2018. A few migrants who had managed to reach northern France and in particular the Calais of ‘jungle’ notoriety took to small boats to reach the UK: about 500 did so in 2018, including 200 in the last two months of last year.  Some might wonder why this did not happen earlier, but this event gave the British government a temporary public relations respite from Brexit as Secretary of State Sajid Javid rushed to Dover to stem this terrifying influx!

A hidden migrant crisis in the Gulf of Aden

Meanwhile, more than 160,000 people arrived in Yemen in 2018 alone. Just to be clear this means that more desperate people crossed the Red Sea into Yemen than crossed the Mediterranean heading for Europe.

Yemen is in the midst of an internationalised civil war and suffering from the world’s worst humanitarian crisis according to the UN’s Secretary General. There has been no outcry about a ‘migrant invasion’ from the Yemeni Minister of the Interior, whether from the internationally recognised government or the Huthi movement that controls the capital Sana’a. Indeed Yemen has received and accepted close to a million Somali refugees since the 1990s, allowing them to work and live in the country, as Yemen is the only country in the Arabian Peninsula to recognise the 1951 UN Refugee Convention. Prior to the current war, the country’s authorities have been impressively hospitable to Somali refugees, though not to the thousands of Ethiopians and others who have crossed the Red Sea.

Migrants crossing into Yemen only make the headlines either when the Saudi-led Coalition planes bomb a boat crossing and kill its passengers (including people leaving on boats commissioned by UN agencies to repatriate them to the Horn of Africa) or when sufficiently large numbers of corpses wash up onto the Yemeni shores of the Arabian Sea. In both cases, they get little more than a few lines in obscure media.

The main route has also changed as a result of the war: while more than 70% of people crossed the Red Sea between 2010 and 2013, since then the figure has dropped to less than 20% with most heading for the Arabian Sea coast.

Who is heading for Yemen and why?

So why are more people still heading for Yemen than leaving?  Who are they? And why do thousands head for a country in the midst of an internationalised civil war where millions are starving?  Shouldn’t travel be in the other direction, with Yemenis trying to escape the disastrous conditions in their country?

Yemen is hardly ever the intended destination of these migrants. While travel to Saudi Arabia and the UAE via Oman used to be difficult in the past, travel conditions have become far more dangerous and expensive in recent years. At the beginning of the current decade, the Saudi regime built a fence along most of the border from the Red Sea coast eastwards to control immigration, and the situation has obviously worsened dramatically since the Saudi-led coalition has intervened in the civil war throughout the country since 2015. In 2018 the cost for getting from the southern Yemeni coast to Saudi Arabia was about USD 1200. But travelling to Saudi Arabia from east Africa via Yemen is significantly cheaper than reaching the southern coast of the Mediterranean, a trip costing at least USD 3000, a price which ignores possible ransoming and imprisonment by criminal gangs as well as the actual sea crossing.

Last year alone, 160,000 people in east Africa were sufficiently desperate to head for a country on the brink of famine and in the midst of a war. The overwhelming majority (92%) are Ethiopians and the rest are Somalis. Three quarters of them are adult men while women form 16% of the migrants and children, mostly boys, form 10%.[1] They head for the southern Arabian Sea coast of Yemen, for two main reasons: the Red Sea coast is now a military zone with naval forces of the coalition firing at fishing boats and anything else that moves; on the African side much of the coast is in Eritrea.[2] The southern Arabian Sea coast is more easily accessible from the different departure points in Somalia, both Berbera in ‘independent’ Somaliland and Bossasso in the ‘autonomous’ Puntland.

In the past 5 years, more than 700 corpses have been recovered on Yemen’s southern coast including 156 in 2018.[3] Crossing into Yemen is the cheapest part of the trip, with fares ranging from USD 120 to USD 200. While many of those involved are aware of the war in Yemen, some are not. Amazingly thousands still cross in the belief that they will have an easy ongoing trip to their ultimate destination, Saudi Arabia. Once in Yemen, many seek additional income and try to find work, usually as unskilled labourers in agriculture and as car washers and other informal jobs in towns. This was difficult in the pre-war period and is almost impossible now the war is on.  Some fall into the hands of criminals and are ill treated and ransomed, on a scale smaller than that found in Libya but sufficiently significant to be notable.

Most Somalis have left their homes because years of drought have made it impossible to cultivate the land and have killed their livestock, leading to worsening poverty, and destitution. Another reason is insecurity in their home areas. Although war has abated in Somalia, it is hardly a haven of peace and prosperity. In addition possible ill-treatment in Yemen has resulted in changed strategies for Somalis: while before 2011 many of them headed for Yemen as a final or temporary destination, since the beginning of this decade and, even more so, since the outbreak of war, their destination is Saudi Arabia, with no intention of remaining in Yemen.

Similarly Ethiopians, who now form the overwhelming majority of migrants, the thousands heading for Saudi Arabia, via Yemen, have clearly not noticed that their country is currently the great economic success story we read about occasionally in western media. Poverty, drought, lack of employment are key factors pushing them to face the risks of this very dangerous journey, regardless of the high risk of failure. Of 42,000 people expelled from Saudi Arabia in the 10 months starting mid-November 2017, 46% were Ethiopians, while 51% were Yemenis. The trend has accelerated with the changes in labour regulations in Saudi Arabia and in 2018 Saudi authorities have deported about 10,000 Ethiopians a month.[4]

Although many have failed, very few have abandoned their ambitions and taken up the International Organisation of Migration’s offers of repatriation: between 2010 and 2018, only 24,000 returned home under these auspices,  77% of them Ethiopians and 16% Somalis. Of course, regardless of the risks, all migrants heading for Saudi Arabia, whether Ethiopian, Somali or Yemeni, dream of success and wealth after a few years of work in Saudi Arabia.

Very few Yemenis try to escape the war. Most of those who head for Saudi Arabia do so to earn money and feed their families as they have done for the past half century. The new Saudi regime has introduced tough measures to ‘saudi-ise’ its labour force and reduce employment opportunities for foreigners as well as make their residence conditions expensive and unappealing. These measures have affected Yemenis as well as many other nationalities and probably reduced the number of Yemenis in Saudi Arabia to below one million. However arrivals since 2015 also include the leaders of the internationally recognised government, their attendants, and some of the war profiteers.

Other than the majority in Saudi Arabia and about 100,000 people of Yemeni origin in the United Arab Emirates, the war has led to the creation of new Yemeni communities in other neighbouring Arab states: Oman has received about 50,000 Yemenis since the war started. In Jordan 14.500 and in Egypt 8000 were registered with UNHCR by the end of 2018, representing a fraction of the Yemenis present in both these countries. Most Yemenis in these countries are professionals as well as political exiles who are maintaining more acceptable living standards and they also include people who have been unable to return to Yemen as a result of the coalition closure of Sana’a airport since mid-2016.

By contrast most of the few thousand Yemenis arriving in Djibouti are poverty stricken war-related refugees. A very few Yemenis have headed for Europe through the unofficial routes used by African migrants: the International Organisation for Migration recorded 326 Yemenis in the first 11 months of 2018, while a total of 353 had reached Greece in 2015[5], reflecting both Yemenis’ reluctance to leave their homes and the difficulties they encounter when travelling internationally.

Within Yemen itself, population movements have been massive: overall since the war started 3 million have been displaced, many of whom return home as soon as fighting abates in their areas, so about 1 million remain displaced. In the second half of 2018 alone, with the coalition military offensive against the city and other parts of the Hodeida governorate, more than one million people were displaced until the December 18 ceasefire, going to other parts of Yemen, often where they had relatives, but basically escaping from the air and ground attacks which led to heavy civilian casualties.

In conclusion, while this article has provided a few figures, readers should remember that each one of the individuals who make up the thousands and millions is experiencing the tragic, painful and frightening suffering associated with the tragedies described in the stories you can find on numerous websites and social media. So this represents a multiplicity of horror stories. Migrants heading into Yemen are facing extreme hardship conditions in addition to entering a country at war where most of the population are also suffering from famine conditions. What does all this say about living conditions and prospects in their own countries?

[1]  IOM Mixed Migration in the Horn of Africa and the Arabian Peninsula, January-June 2018.

[2]  Surprisingly no Eritreans appear to go to Yemen, they mostly head directly overland to the Mediterranean sea, at far higher cost, ranging from a minimum of USD 1800 to about USD 4000 per person, and that excludes the ransoms many have to pay when they are taken hostage by traffickers.

Helen Lackner has worked in all parts of Yemen since the 1970s and lived there for close to 15 years.  She has written about the country’s political economy as well as social and economic issues.  She works as a freelance rural development consultant in Yemen and elsewhere. Her new book, Yemen in Crisis: Autocracy, Neo-Liberalism and the Disintegration of a State, was published by Saqi books in October, 2017.