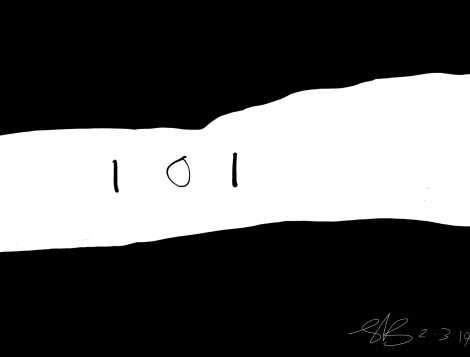 4 Mar 2019 – John Pilger invokes George Orwell in calling on his compatriots to stand up for the freedom of ‘a distinguished Australian’, the founder and editor of WikiLeaks, Julian Assange, and for ‘real journalism of a kind now considered exotic’.

Whenever I visit Julian Assange, we meet in a room he knows too well. There is a bare table and pictures of Ecuador on the walls. There is a bookcase where the books never change. The curtains are always drawn and there is no natural light. The air is still and fetid.

Before I enter Room 101, I must surrender my passport and phone. My pockets and possessions are examined. The food I bring is inspected.

The man who guards Room 101 sits in what looks like an old-fashioned telephone box. He watches a screen, watching Julian. There are others unseen, agents of the state, watching and listening.

Cameras are everywhere in Room 101. To avoid them, Julian manoeuvres us both into a corner, side by side, flat up against the wall. This is how we catch up: whispering and writing to each other on a notepad, which he shields from the cameras. Sometimes we laugh.

I have my designated time slot. When that expires, the door in Room 101 bursts open and the guard says, “Time is up!” On New Year’s Eve, I was allowed an extra 30 minutes and the man in the phone box wished me a happy new year, but not Julian.

Of course, Room 101 is the room in George Orwell’s prophetic novel, 1984, where the thought police watched and tormented their prisoners, and worse, until people surrendered their humanity and principles and obeyed Big Brother.

Julian Assange will never obey Big Brother. His resilience and courage are astonishing, even though his physical health struggles to keep up.

Julian is a distinguished Australian, who has changed the way many people think about duplicitous governments. For this, he is a political refugee subjected to what the United Nations calls “arbitrary detention”.

As founder and editor of WikiLeaks, his crime has been to make sense of dark times. WikiLeaks has an impeccable record of accuracy and authenticity which no newspaper, no TV channel, no radio station, no BBC, no New York Times, no Washington Post, no Guardian can equal. Indeed, it shames them.

That explains why he is being punished.

Last week, the International Court of Justice ruled that the British Government had no legal powers over the Chagos Islanders, who in the 1960s and 70s, were expelled in secret from their homeland on Diego Garcia in the Indian Ocean and sent into exile and poverty. Countless children died, many of them, from sadness. It was an epic crime few knew about.

For almost 50 years, the British have denied the islanders’ the right to return to their homeland, which they had given to the Americans for a major military base.

In 2009, the British Foreign Office concocted a “marine reserve” around the Chagos archipelago.

This touching concern for the environment was exposed as a fraud when WikiLeaks published a secret cable from the British Government reassuring the Americans that “the former inhabitants would find it difficult, if not impossible, to pursue their claim for resettlement on the islands if the entire Chagos Archipelago were a marine reserve.”

The truth of the conspiracy clearly influenced the momentous decision of the International Court of Justice.

WikiLeaks has also revealed how the United States spies on its allies; how the CIA can watch you through your iPhone; how Presidential candidate Hillary Clinton took vast sums of money from Wall Street for secret speeches that reassured the bankers that if she was elected, she would be their friend.

In 2016, WikiLeaks revealed a direct connection between Clinton and organised jihadism in the Middle East: terrorists, in other words. One email disclosed that when Clinton was US Secretary of State, she knew that Saudi Arabia and Qatar were funding Islamic State, yet she accepted huge donations for her foundation from both governments.

She then approved the world’s biggest ever arms sale to her Saudi benefactors: arms that are currently being used against the stricken people of Yemen.

That explains why he is being punished.

WikiLeaks has also published more than 800,000 secret files from Russia, including the Kremlin, telling us more about the machinations of power in that country than the specious hysterics of the Russiagate pantomime in Washington.

This is real journalism – journalism of a kind now considered exotic: the antithesis of Vichy journalism, which speaks for the enemy of the people and takes its sobriquet from the Vichy government that occupied France on behalf of the Nazis.

Vichy journalism is censorship by omission, such as the untold scandal of the collusion between Australian governments and the United States to deny Julian Assange his rights as an Australian citizen and to silence him.

In 2010, Prime Minister Julia Gillard went as far as ordering the Australian Federal Police to investigate and hopefully prosecute Assange and WikiLeaks – until she was informed by the AFP that no crime had been committed.

Last weekend, the Sydney Morning Herald published a lavish supplement promoting a celebration of “Me Too” at the Sydney Opera House on 10 March. Among the leading participants is the recently retired Minister of Foreign Affairs, Julie Bishop.

Bishop has been on show in the local media lately, lauded as a loss to politics: an “icon”, someone called her, to be admired.

The elevation to celebrity feminism of one so politically primitive as Bishop tells us how much so-called identity politics have subverted an essential, objective truth: that what matters, above all, is not your gender but the class you serve.

Before she entered politics, Julie Bishop was a lawyer who served the notorious asbestos miner James Hardie which fought claims by men and their families dying horribly with black lung disease.

Lawyer Peter Gordon recalls Bishop “rhetorically asking the court why workers should be entitled to jump court queues just because they were dying.”

Bishop says she “acted on instructions… professionally and ethically”.

Perhaps she was merely “acting on instructions” when she flew to London and Washington last year with her ministerial chief of staff, who had indicated that the Australian Foreign Minister would raise Julian’s case and hopefully begin the diplomatic process of bringing him home.

Julian’s father had written a moving letter to the then Prime Minister Malcolm Turnbull, asking the government to intervene diplomatically to free his son. He told Turnbull that he was worried Julian might not leave the embassy alive.

Julie Bishop had every opportunity in the UK and the US to present a diplomatic solution that would bring Julian home. But this required the courage of one proud to represent a sovereign, independent state, not a vassal.

Instead, she made no attempt to contradict the British Foreign Secretary, Jeremy Hunt, when he said outrageously that Julian “faced serious charges”. What charges? There were no charges.

Will those feminists who fawn over this false icon at the Opera House next Sunday be reminded of her role in colluding with foreign forces to punish an Australian journalist, one whose work has revealed that rapacious militarism has smashed the lives of millions of ordinary women in many countries: in Iraq alone, the US-led invasion of that country, in which Australia participated, left 700,000 widows.

So what can be done? An Australian government that was prepared to act in response to a public campaign to rescue the refugee football player, Hakeem al-Araibi, from torture and persecution in Bahrain, is capable of bringing Julian Assange home.

Yet the refusal by the Department of Foreign Affairs in Canberra to honour the United Nations’ declaration that Julian is the victim of “arbitrary detention” and has a fundamental right to his freedom, is a shameful breach of the spirit of international law.

Why has the Australian government made no serious attempt to free Assange? Why did Julie Bishop bow to the wishes of two foreign powers? Why is this democracy traduced by its servile relationships, and integrated with lawless foreign power?

The persecution of Julian Assange is the conquest of us all: of our independence, our self respect, our intellect, our compassion, our politics, our culture.

War is not peace, freedom is not slavery, ignorance is not strength. If Julian can stand up to Big Brother, so can you: so can all of us.

John Pilger gave this speech at a rally in Sydney for Julian Assange, organised by the Socialist Equality Party.