Why Did Bush Go to War in Iraq? The Answer Is More Sinister Than You Think

No, it wasn’t because of WMDs, democracy or Iraqi oil. 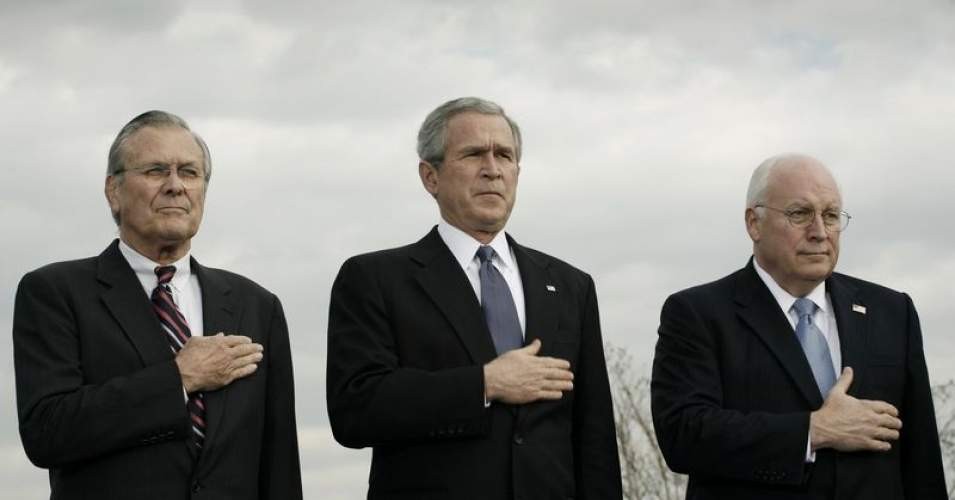 (From left) Former Defense Secretary Donald Rumsfeld, President George W. Bush, and Vice President Dick Cheney. “My investigation into the causes of the war,” writes Professor Butt, “finds that it had little to do with fear of WMDs – or other purported goals, such as a desire to “spread democracy” or satisfy the oil or Israel lobbies. Rather, the Bush administration invaded Iraq for its demonstration effect.”(Photo: via PRI)

20 Mar 2019 – Sixteen years after the United States invaded Iraq and left a trail of destruction and chaos in the country and the region, one aspect of the war remains criminally underexamined: why was it fought in the first place? What did the Bush administration hope to get out of the war?

The official, and widely-accepted, story remains that Washington was motivated by Saddam Hussein’s weapons of mass destruction (WMD) programme. His nuclear capabilities, especially, were deemed sufficiently alarming to incite the war. As then US Secretary of State Condoleezza Rice said, “We do not want the smoking gun to be a mushroom cloud.”

Despite Saddam not having an active WMD programme, this explanation has found support among some International Relations scholars, who say that while the Bush administration was wrong about Saddam’s WMD capabilities, it was sincerely wrong. Intelligence is a complicated, murky enterprise, the argument goes, and given the foreboding shadow of the 9/11 attacks, the US government reasonably, if tragically, misread the evidence on the dangers Saddam posed.

There is a major problem with this thesis: there is no evidence for it, beyond the words of the Bush officials themselves. And since we know the administration was engaged in a widespread campaign of deception and propaganda in the run-up to the Iraq war, there is little reason to believe them.

My investigation into the causes of the war finds that it had little to do with fear of WMDs – or other purported goals, such as a desire to “spread democracy” or satisfy the oil or Israel lobbies. Rather, the Bush administration invaded Iraq for its demonstration effect.

A quick and decisive victory in the heart of the Arab world would send a message to all countries, especially to recalcitrant regimes such as Syria, Libya, Iran, or North Korea, that American hegemony was here to stay. Put simply, the Iraq war was motivated by a desire to (re)establish American standing as the world’s leading power.

Indeed, even before 9/11, then-Secretary of Defense Donald Rumsfeld saw Iraq through the prism of status and reputation, variously arguing in February and July 2001 that ousting Saddam would “enhance US credibility and influence throughout the region” and “demonstrate what US policy is all about”.

“A quick and decisive victory in the heart of the Arab world would send a message to all countries, especially to recalcitrant regimes such as Syria, Libya, Iran, or North Korea, that American hegemony was here to stay. Put simply, the Iraq war was motivated by a desire to (re)establish American standing as the world’s leading power.”

These hypotheticals were catalysed into reality by September 11, when symbols of American military and economic dominance were destroyed. Driven by humiliation, the Bush administration felt that the US needed to reassert its position as an unchallengeable hegemon.

The only way to send a message so menacing was a swashbuckling victory in war. Crucially, however, Afghanistan was not enough: it was simply too weak a state. As prison bullies know, a fearsome reputation is not acquired by beating up the weakest in the yard. Or as Rumsfeld put it on the evening of 9/11, “We need to bomb something else to prove that we’re, you know, big and strong and not going to be pushed around by these kinds of attacks.”

Moreover, Afghanistan was a “fair” war, a tit-for-tat response to the Taliban’s provision of sanctuary to al-Qaeda’s leadership. Rumsfeld, Deputy Secretary of Defense Paul Wolfowitz, and Under Secretary of Defense for Policy Douglas Feith considered restricting retaliation to Afghanistan dangerously “limited”, “meager”, and “narrow”. Doing so, they alleged, “may be perceived as a sign of weakness rather than strength” and prove to “embolden rather than discourage regimes” opposed to the US. They knew that sending a message of unbridled hegemony entailed a disproportionate response to 9/11, one that had to extend beyond Afghanistan.

Iraq fit the bill both because it was more powerful than Afghanistan and because it had been in neoconservative crosshairs since George HW Bush declined to press on to Baghdad in 1991. A regime remaining defiant despite a military defeat was barely tolerable before 9/11. Afterwards, however, it became untenable.

That Iraq was attacked for its demonstration effect is attested to by several sources, not least the principals themselves – in private. A senior administration official told a reporter, off the record, that “Iraq is not just about Iraq”, rather “it was of a type”, including Iran, Syria, and North Korea.

In a memo issued on September 30, 2001, Rumsfeld advised Bush that “the USG [US government] should envision a goal along these lines: New regimes in Afghanistan and another key State [or two] that supports terrorism [to strengthen political and military efforts to change policies elsewhere]”.

Feith wrote to Rumsfeld in October 2001 that action against Iraq would make it easier to “confront – politically, militarily, or otherwise” Libya and Syria. As for then-Vice President Dick Cheney, one close adviser revealed that his thinking behind the war was to show: “We are able and willing to strike at someone. That sends a very powerful message.”

In a 2002 column, Jonah Goldberg coined the “Ledeen Doctrine”, named after neoconservative historian Michael Ledeen. The “doctrine” states: “Every ten years or so, the United States needs to pick up some small crappy little country and throw it against the wall, just to show the world we mean business.”

It may be discomfiting to Americans to say nothing of millions of Iraqis that the Bush administration spent their blood and treasure for a war inspired by the Ledeen Doctrine. Did the US really start a war – one that cost trillions of dollars, killed hundreds of thousands of Iraqis, destabilised the region, and helped create the Islamic State of Iraq and the Levant (ISIL) – just to prove a point?

More uncomfortable still is that the Bush administration used WMDs as a cover, with equal parts fearmongering and strategic misrepresentation – lying – to exact the desired political effect. Indeed, some US economists consider the notion that the Bush administration deliberately misled the country and the globe into war in Iraq to be a “conspiracy theory”, on par with beliefs that President Barack Obama was born outside the US or that the Holocaust did not occur.

But this, sadly, is no conspiracy theory. Even Bush officials have sometimes dropped their guard. Feith confessed in 2006 that “the rationale for the war didn’t hinge on the details of this intelligence even though the details of the intelligence at times became elements of the public presentation”.

That the administration used the fear of WMDs and terrorism to fight a war for hegemony should be acknowledged by an American political establishment eager to rehabilitate George W Bush amid the rule of Donald Trump, not least because John Bolton, Trump’s national security adviser, seems eager to employ similar methods to similar ends in Iran.

Ahsan I Butt is an Associate Professor at the Schar School of Policy and Government at George Mason University.