I Fought South African Apartheid. I See the Same Brutal Policies in Israel

I was shut down in South Africa for speaking out, and I’m disturbed that the same is happening to critics of Israel now. 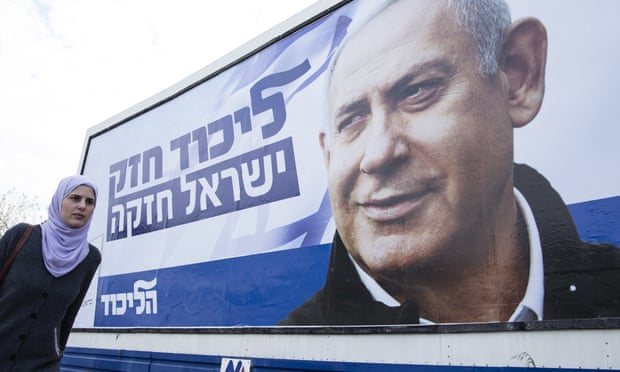 ‘Benjamin Netanyahu said recently: ‘Israel is not a state of all its citizens … Israel is the nation state of the Jewish people – and them alone.’
Photograph: Amir Levy/Getty Images

3 Apr 2019 – As a Jewish South African anti-apartheid activist I look with horror on the far-right shift in Israel ahead of this month’s elections, and the impact in the Palestinian territories and worldwide.

Israel’s repression of Palestinian citizens, African refugees and Palestinians in the occupied West Bank and Gaza has become more brutal over time. Ethnic cleansing, land seizure, home demolition, military occupation, bombing of Gaza and international law violations led Archbishop Tutu to declare that the treatment of Palestinians reminded him of apartheid, only worse.

I’m also deeply disturbed that critics of Israel’s brutal policies are frequently threatened with repression of their freedom of speech, a reality I’ve now experienced at first hand. Last week, a public meeting in Vienna where I was scheduled to speak in support of Palestinian freedom, as part of the global Israeli Apartheid Week, was cancelled by the museum hosting the event – under pressure from Vienna’s city council, which opposes the international movement to divest from Israel.

South Africa’s apartheid government banned me for life from attending meetings. Nothing I said could be published, because I stood up against apartheid. How disgraceful that, despite the lessons of our struggle against racism, such intolerance continues to this day, stifling free speech on Palestine.

During the South African struggle, we were accused of following a communist agenda, but smears didn’t deflect us. Today, Israel’s propaganda follows a similar route, repeated by its supporters – conflating opposition to Israel with antisemitism. This must be resisted.

A growing number of Jews worldwide are taking positions opposing Israel’s policies. Many younger Jews are supporting the Palestinian-led Boycott, Divestment and Sanctions (BDS) movement, a peaceful mobilisation inspired by the movement that helped to end apartheid in South Africa.

How disgraceful that, despite the lessons of our struggle against racism, such intolerance continues to this day

The parallels with South Africa are many. The Israeli prime minister, Benjamin Netanyahu, recently said: “Israel is not a state of all its citizens … Israel is the nation state of the Jewish people – and them alone.”

Similar racist utterances were common in apartheid South Africa. We argued that a just peace could be reached, and that white people would find security only in a unitary, non-racist, democratic society after ending the oppression of black South Africans and providing freedom and equality for all.

By contrast, Netanyahu’s Likud is desperately courting extremist parties, and abandoning any pretext of negotiating with the Palestinians. His plan to bring an extremist settler party and Kahanist terrorist party into his governing coalition is obscene. His most serious opponent is a general accused of war crimes in Gaza. As long as a repressive apartheid-like regime rules, things will only worsen for Palestinians and Israelis too.

The anti-apartheid movement grew over three decades, in concert with the liberation struggle of South Africa’s people, to make a decisive difference in toppling the racist regime. Europeans refused to buy apartheid fruit; there were sports boycotts; dockworkers from Liverpool to Melbourne refused to handle South African cargo; an academic boycott turned universities into apartheid-free zones; and arms sanctions helped to shift the balance against South Africa’s military.

As the movement developed and UN resolutions isolated Pretoria’s regime, pressure mounted on trading partners and supportive governments. The US Congress’s historic adoption of the Comprehensive Anti-Apartheid Act (1986) was a major turning point. When the Chase and Barclays banks closed in South Africa and withdrew their lines of credit, the battle was well-nigh over.

Every step is important – pressing institutions and corporations that are complicit in Israel’s crimes and supporting Palestinians in their struggle for liberation. This is not about destroying Israel and its people but about working for a just solution, as we did in South Africa.

It is the duty of supporters of justice worldwide to mobilise in solidarity with Palestinians to help usher in an era of freedom.

Ronnie Kasrils is a former South African government minister, and was a leading member of the African National Congress during the apartheid era.