It’s Cheaper to Replace Most Coal Plants with Renewables than Keep Them Open: Report 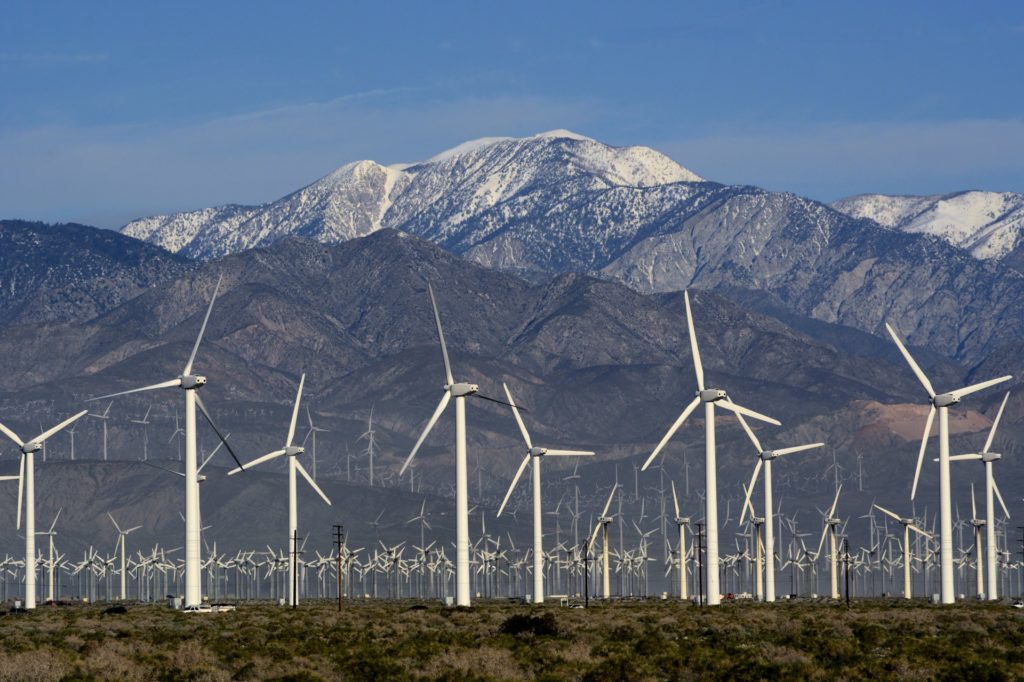 25 Mar 2019 – It would be more expensive to keep the majority of U.S. coal plants open than to replace them with new wind and solar power alternatives, according to new findings published Monday.

Authored by the environmental firm Energy Innovation in partnership with the grid analysis company Vibrant Clean Energy, the research finds that replacing 74 percent of coal plants nationally with wind and solar power would immediately reduce power costs, with wind power in particular at times cutting the cost almost in half. By 2025, the analysis indicates, around 86 percent of coal plants could similarly be at risk of cheaper replacement by renewables.

“We’ve been closely following the cost of wind and solar in the U.S. and globally, and the costs have come down so far that we’re now seeing unprecedented low [costs] for wind and solar,” said Mike O’Boyle, Energy Innovation’s electricity policy director, on a call with reporters.

That trend has opened up an opportunity for a dramatic shift, the groups argue, one that could see coal largely replaced in many areas by energy sources that are better

President Donald Trump has worked hard to save U.S. coal, going so far as to advocate for a financial bailout to rescue the dying industry. But data largely suggests that coal’s economic value will continue to plummet, a downturn that comes as wind and solar power are becoming increasingly cheaper and more viable options.

Using a data set of coal, wind, and solar costs, the report contrasts the cost of generating energy at coal plants against costs associated with potential wind or solar hubs in the nearby area. The report only examines the “local” area — defined as 35 miles from a given coal plant — to determine whether the plant has the potential to be replaced by cheaper renewables within that zone. Restricting the distance to the local area, however, leads the analysis to be more conservative.

“That local analysis is quite constraining,” O’Boyle said, noting that wind and solar grow in number when considering areas farther away from coal plants. The authors indicated that they opted for the local comparison because it offers a greater incentive to communities looking to transition from coal to renewables.

Nonetheless, the findings are stark even on a local level: 211 gigawatts (GW) of existing U.S. coal capacity as of the end of 2017 is at risk from renewable energy alternatives capable of providing the same amount of energy at a cheaper price. Within six years, that number increases to 246 GW, or nearly the entire U.S. fleet.

Some 93 GW of existing U.S. coal capacity, meanwhile, is substantially at risk from new renewable energy sources in 2018, with wind and solar poised to undercut costs by 25 percent. Even as federal renewable energy tax credits phase out, the amount of coal at risk of being replaced by renewables is projected to increase to 140 GW by 2025. 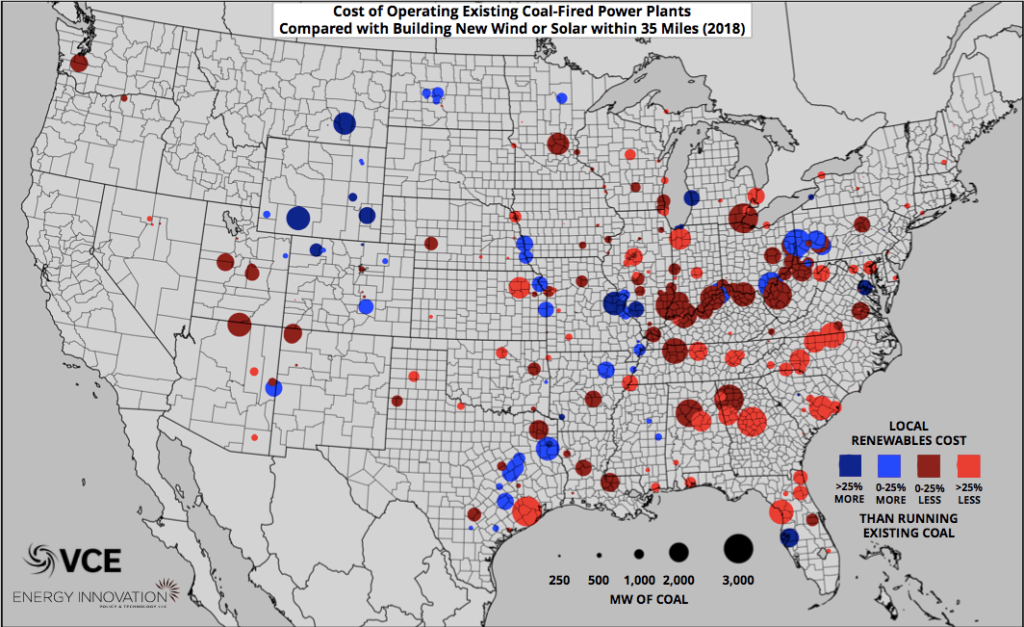 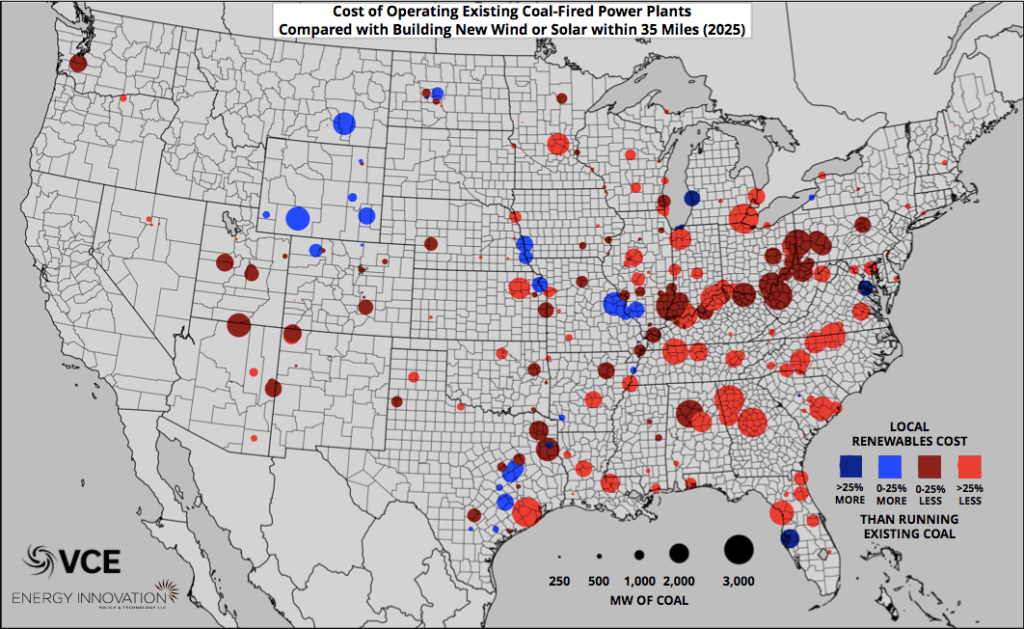 The firms behind the study both support renewable energy and argue in favor of a transition away from fossil fuels. But their analysis builds on existing research showing that the U.S. coal industry is rapidly on the decline. In fact, more coal plants shut down during Trump’s first two years in office than during former President Barack Obama’s entire first term. U.S. coal consumption also dropped to its lowest rate in nearly 40 years in 2018.

That swift decline has come hand in hand with the rise of wind and solar energy, both of which are widely considered far more economically appealing than coal.

“Coal is a dirty and expensive way to generate electricity,” the report observes, going on to note that it is becoming “increasingly uneconomic” when contrasted with new wind and solar opportunities.

Regional opportunities also abound. While the Midwest is likely to be disproportionately impacted by the closure of coal plants within the next five years, the region has ample potential for wind energy, according to the report. There are also abundant solar opportunities in a number of areas, including the sunny Southeast, where almost all coal plants are already substantially at risk. 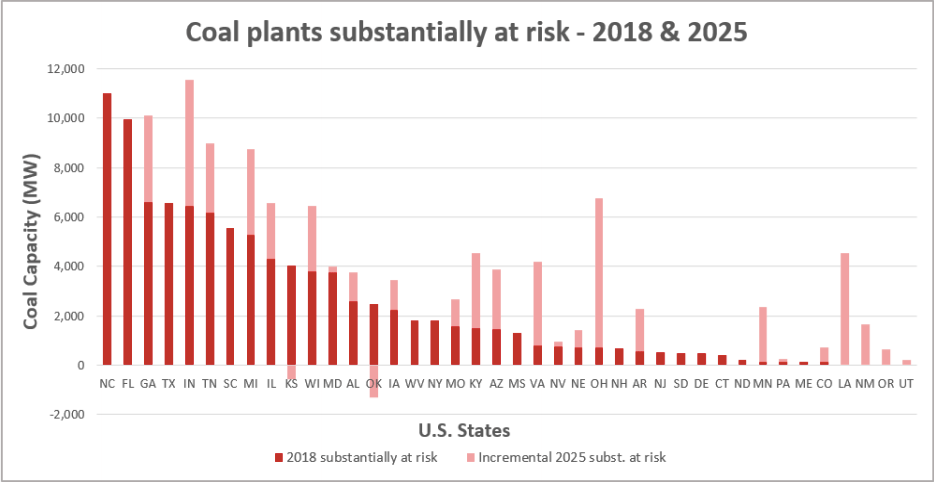 The report, however, doesn’t analyze the role of natural gas in dethroning coal power plants. Natural gas is widely seen as a cheap alternative to coal, along with renewables. But natural gas is a fossil fuel with severe implications for human health and the environment, a reality that played a role in its exemption from the report, the authors told ThinkProgress.

The analysis also offers mixed findings for those championing efforts like the Green New Deal resolution introduced by Rep. Alexandria Ocasio-Cortez (D-NY) and Sen. Ed Markey (D-MA). The resolution pushes for moving away from fossil fuels while creating jobs and protecting the livelihood of communities impacted by the shift. Monday’s study acknowledges that if regulators, customers, and utilities looked beyond the local 35-mile limit examined in the report, the potential for costs to drop increases — but this could mean fewer jobs in the immediate area as renewables replace coal farther outside the local community.

“Building local renewables in the immediate vicinity of coal plants implies wind and solar could replace local jobs, expand the tax base, reuse existing transmission, and locate in the same utility service territory. But these constraints are quite restrictive,” the analysis acknowledges.

That doesn’t mean that starting with a local framework isn’t a good approach. O’Boyle noted that the findings could prompt “policymakers and other stakeholders” to assess the benefits to their communities that a shift to renewables might entail.

“Using local renewables can really be used to address some community transition issues,” he said, in a nod to the jobs that could be lost as the coal industry declines. “[They] can look at that as they’re considering new options.”

E.A. Crunden is a climate reporter at ThinkProgress. Get in touch: ecrunden@thinkprogress.org.