My TED Talk: How I Took on the Tech Titans in Their Lair

21 Apr 2019 – For more than a year, the writer has been probing a darkness at the heart of Silicon Valley. Last week, at a TED talk that became a global viral sensation, she told the tech billionaires they had broken democracy. What happened next? [Watch the Video in the end] 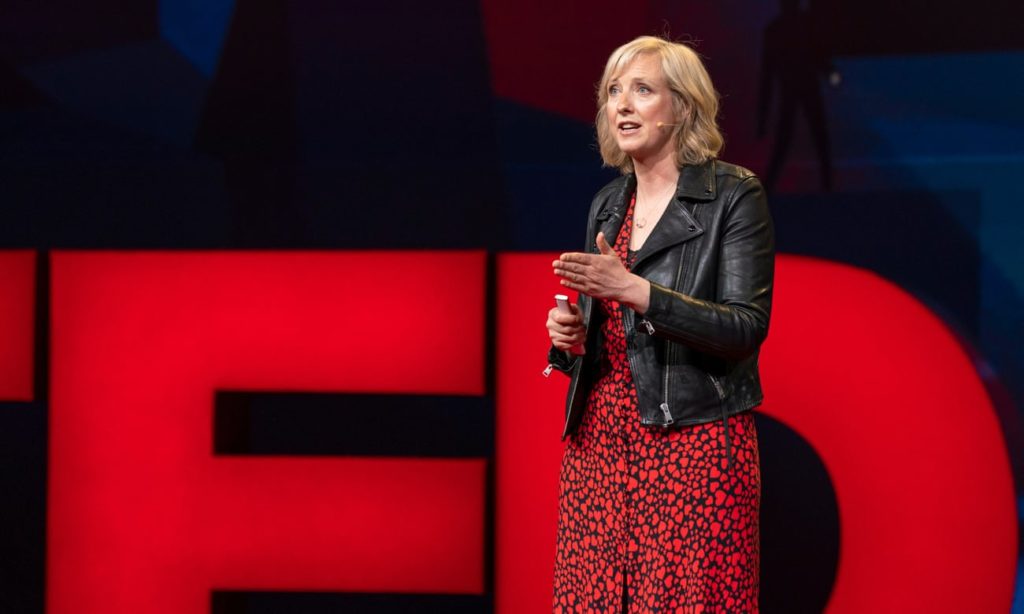 Carole Cadwalladr speaking at TED2019 last week. The Observer journalist was invited to give a talk in a session tagged Truth. Photograph: Marla Aufmuth/TED

If Silicon Valley is the beast, then TED is its belly. And on Monday [15 Apr], I entered it. The technology conference that has become a global media phenomenon with its short, punchy TED Talks that promote “Ideas Worth Spreading” is the closest thing that Silicon Valley has to a safe space.

A safe space that was breached last week. A breach that I was not just there to witness, but that I actively participated in. I can’t claim either credit or responsibility – I didn’t invite myself to the conference, held annually in Vancouver, or programme my talk in a session called “Truth”. But I did take the reporting that we have been publishing in the Observer over the past two and a half years, I did condense it into a 15-minute talk, and I did deliver it on the TED main stage directly to the people I described as “the Gods of Silicon Valley: Mark Zuckerberg, Sheryl Sandberg, Larry Page, Sergey Brin and Jack Dorsey”. The founders of Facebook and Google – who were sponsoring the conference – and the co-founder of Twitter – who was speaking at it.

I did tell them that they had facilitated multiple crimes in the EU referendum. That as things stood, I didn’t think it was possible to have free and fair elections ever again. That liberal democracy was broken. And they had broke it.

It was only later that I began to realise quite what TED had done: how, in this setting, with this crowd, it had committed the equivalent of inviting the fox into the henhouse. And I was the fox. Or as one attendee put it: “You came into their temple,” he said. “And shat on their altar.”

I did. Not least, I discovered, because I named them. Because nobody had told me not to. And so I called them out, in a room that included their peers, mentors, employees, friends and investors.

A room that fell silent when I ended and then erupted in whoops and cheers. “It’s what we’re all thinking,” one person told me. “But it’s been the thing that nobody had actually said.”

Because it isn’t an exaggeration to say that TED is the holy temple of tech. In the early days, it was where the new miracles of technology were first unveiled – the Apple Macintosh and the CD-Rom – and in recent years it’s become the place that has most clearly articulated the Silicon Valley gospel. For many, including myself, TED was how they discovered the excitement and possibilities of technology. A brand of tech utopianism that, even as the world has darkened, TED has found hard to give up.

“You came into their temple and shat on their altar.”
— TED attendee to Carole Cadwalladr

But now it has. Or at least it’s sent up a flare. A bold, impossible-to-miss stroke by its high priest, Chris Anderson, a thoughtful Brit who bought TED when it was in its first incarnation – a secretive Californian conference for the masters of the universe – and made it a multi-million-dollar media organisation.

Anderson hadn’t just invited me in, he put me front and centre, in the first session, unavoidable, even – maybe especially – for his sponsors.

In the simulcast lounge where conference attendees – who pay between $10,000 and $250,000 a ticket – lounge on soft seating and watch on screens, was Sergey Brin, Google’s co-founder. “I saw his eyes flicker when you said his name,” one person told me. “As if he was checking if anybody was looking.”

In the theatre, senior executives of Facebook had been “warned” beforehand. And within minutes of stepping off stage, I was told that its press team had already lodged an official complaint. In fairness, what multi-billion dollar corporation with armies of PRs, lawyers and crisis teams, not to mention, embarrassingly, our former deputy prime minister, Nick Clegg, wouldn’t want to push back on the charge that it has broken democracy?

Facebook’s difficulty is that it had no grounds to challenge my statement. No counter-evidence. If it was innocent of all charges, why hasn’t Mark Zuckerberg come to Britain and answered parliament’s questions? Though a member of the TED team told me, before the session had even ended, that Facebook had raised a serious challenge to the talk to claim “factual inaccuracies” and she warned me that they had been obliged to send them my script. What factual inaccuracies, we both wondered. “Let’s see what they come back with in the morning,” she said. Spoiler: they never did. 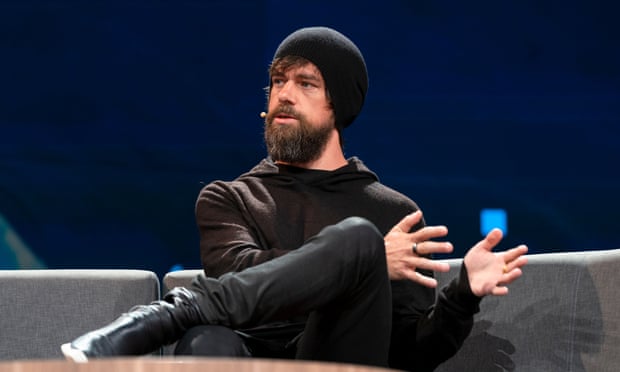 Twitter co-founder Jack Dorsey at TED2019 in Vancouver last week. ‘There is no point in quick fixes,’ he said.
Photograph: Ryan Lash/TED

That night, though, there was what was described to me as “an emergency dinner” between Anderson and a cadre of senior Facebook executives. They were very angry, my spies told me. But Anderson, one of the most thoughtful people in tech, seemed unruffled.

“There’s always been a strict church and state separation between sponsors and editorial,” he said. “And these are important conversations we need to have. There’s a lot of people here who are very upset about what has happened to the internet. They want to take it back and we have to start figuring out how.” At the end of my talk, he invited Zuckerberg or anyone else at Facebook to come and respond. Spoiler: they never did.

The next day, on stage, Anderson interviewed Jack Dorsey, the co-founder of Twitter. How hard is it to get rid of Nazis from Twitter, Anderson asked him. Dorsey, dressed in a black beanie hat, black hoodie, black jeans and black boots, a monk for the online age, responded, expressionlessly, saying that Nazism was “hard to define”.

How hard is it to get rid of Nazis from Twitter?, TED’s Chris Anderson asked Twitter co-founder Jack Dorsey

There were problems, he admitted, but there was no point in quick fixes. They needed to go “deep”. You’re on a ship, Anderson said, and there’s an iceberg ahead. “And you say… ‘Our boat hasn’t been built to handle it’ and we’re waiting and you are showing this extraordinary calm and we’re all worried but we’re outside saying, ‘Jack, turn the fucking wheel.’ ”

Anderson gave credit to Dorsey for actually showing up. And it’s true he did. He showed guts for doing what Zuckerberg and Sandberg would not.But, for many, including me, he might as well not have bothered. What came across most strongly, chillingly, was the complete absence of emotion – any emotion – in Dorsey’s face, expression, demeanour or voice.

When Cyndi Stivers, a TED director, asked me last summer if I’d be interested in doing a talk, I knew I would be terrified, but I knew I had to do it. The one constant in the time I have been reporting this story has been the lack of mainstream broadcast coverage, the absence of other newspapers picking it up, the failure by even senior, well-respected journalists to understand the issues at stake, the wilful misinterpretation of the facts by the right-wing press, the almost total silence from both the government and the opposition.

The brilliance of the TED format, its slick production, deft editing and clever curation, is that it offers an opportunity to bypass the traditional media – the BBC most especially – that has failed or refused to cover this story. TED Talks speak to an audience who desperately need to know what happened but almost certainly don’t: the disenfranchised teenagers and young people who had no vote but who will be affected by this perfect storm of technology and criminality for the rest of their lives.

But TED is a tough, pressured, hugely stressful gig, even for experienced public speakers, and I’m not that. Standing in the wings waiting to go on, I told the stage manager that my heart was racing uncontrollably and in an act of great kindness, she grasped both my hands and made me take breath after breath. And what you don’t see in the video – deftly edited out – is the awful, heart-stopping moment when I forgot a line, followed by another act of collective kindness, a spontaneous empathic cheer as I composed myself and found my cue. “That’s when the audience came onside,” an attendee told me. “You were human. That’s when you won them over.”

“Person after person tells me they were moved or terrified by my talk.”
— Carole Cadwalladr

On the TED stage, dressed in a hat and a hood, Dorsey appeared – and I can’t think of any other way of saying this – insentient. And when I make the same observation to an older tech titan, he tells me how he once went with Zuckerberg on a 15-hour flight on a private jet with 16 other people and Zuckerberg never said a word to anyone for the entire duration.

It’s all I can think about by the end of the week. For five days, I’ve been overwhelmed by support and understanding and encouragement from wellwishers, person after person who tells me they were moved or terrified by my talk, by the danger posed by this technology that has unleashed a potential for destruction that we neither saw coming nor know how to contain.

Dorsey can see the iceberg but doesn’t seem to feel our terror. Or understand it. In an interview last summer, US journalist Kara Swisher, repeatedly asked Zuckerberg how he felt about Facebook’s role in inciting genocide in Myanmar – as established by the UN – and he couldn’t or wouldn’t answer.

The world needs all kinds of brains. But in the situation we are in, with the dangers we face, it’s not these kinds of brains. These are brilliant men. They have created platforms of unimaginable complexity. But if they’re not sick to their stomach about what has happened in Myanmar or overwhelmed by guilt about how their platforms were used by Russian intelligence to subvert their own country’s democracy, or sickened by their own role in what happened in New Zealand, they’re not fit to hold these jobs or wield this unimaginable power.

I walked among the tech gods last week. I don’t think they set out to enable massacres to be live-streamed. Or massive electoral fraud in a once-in-a-lifetime, knife-edge vote. But they did. If they don’t feel guilt, shame and remorse, if they don’t have a burning desire to make amends, their boards, shareholders, investors, employees and family members need to get them out.

We can see the iceberg. We know it’s coming. That’s the lesson of TED 2019. We all know it. There are only five people in the room who apparently don’t: Mark Zuckerberg, Sheryl Sandberg, Larry Page, Sergey Brin and Jack Dorsey.

Carole Cadwalladr is a British investigative journalist, features writer and reporter for the Observer. She grew up in Wales.