The New EU Copyright Law Closes the Book on Free Speech Online. That’s a Feature, Not a Bug. 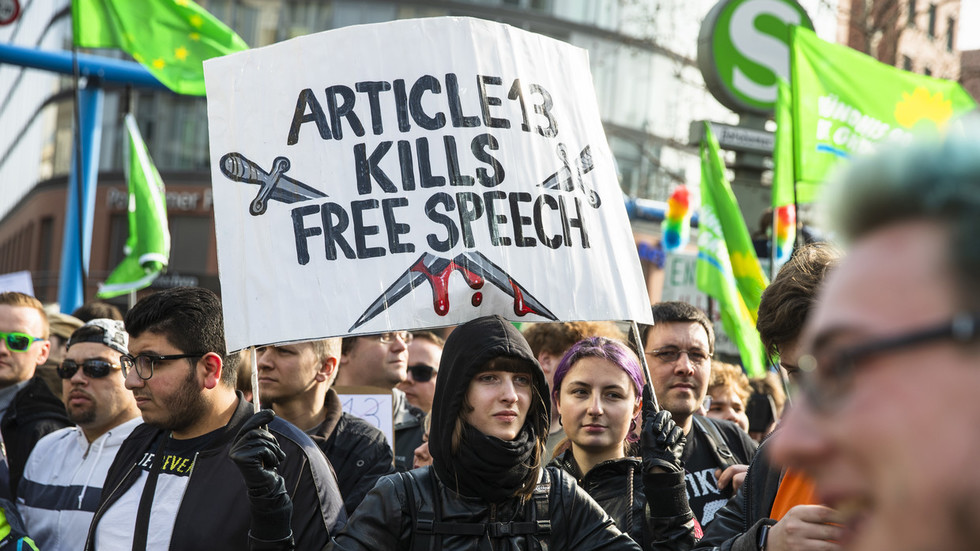 26 Mar 2019 – The controversial copyright law facing a final vote in the EU parliament is less about copyright than it is about hammering a final nail in the coffin of the freedoms the internet once promised. Yes, Article 13 is that bad.

Most laws address themselves toward tangible, human-sized problems. Article 13, the sweeping European copyright legislation that proposes to filter all content on its way to the web to ensure no rights are being violated, isn’t interested in such prosaic stuff. It seeks to defy the Second Law of Thermodynamics.

Physics? In my internet? The web operates according to the laws of entropy. It trends toward decentralization – of ideas, of social groups, but most importantly of power. Authority looks at this delightful disorder and sees only malevolent chaos that needs to be reined in. Legislators and the corporations that run their countries have spent a lot of time brainstorming on how to put the cat back in the bag, and Article 13 is the result.

This is not just a European problem. Like a catastrophic nuclear meltdown, there is no containing the fallout from this kind of measure, designed to effectively destroy the internet as we know it. Companies and platforms may start by leaving Europe, or refusing to serve European customers, but the internet has no borders, and the big platforms will embrace whatever filters are required to maintain their hold on their users – no matter what country they inhabit. One need only witness the absurdity when Canadian, American and Australian Twitter users are sanctioned for violating Pakistani blasphemy laws to understand the willingness of these platforms to cater to the most oppressive common denominator.

It’s almost surprising that the EU isn’t trying to sell this law as the killer weapon in the ongoing War on Fake News, given its member countries’ use of that trendy adversary to justify increasingly draconian speech restrictions – from the proposed end of anonymity in France to criminal charges for platforms that don’t take down “problematic” speech quickly enough in the UK. But then, EU leaders aren’t actually elected, so they don’t have to sell the people anything. Like the monopolies Article 13 enables, the EU gives its users no choice – accept this degraded, deliberately-hobbled, entropically-eviscerated parody of the internet, or stay offline (by the time they’re done with it, you’ll hardly be able to tell the difference, anyway).

Google spent $100 million to develop a filter capable of screening uploaded content in real time in order to prevent wrong-think from seeping into YouTube livestreams. There are few feelings as unsettling as livestreaming to an audience only to find one’s mic cut after broaching a topic that has been declared off-limits. For now, those who would resist the jackbooted march of “progress” can join another platform, but under Article 13’s restrictions, will that other platform be able to afford a $100 million content filter of its own?

Algorithms are dumb – dumber than even the most clueless human forum moderator – and automated filters cannot tell the difference between fair use, parody, and straight-up rip-offs any more than they can tell the difference between real and fake news. Collateral censorship will tear a hole in casual communication – forget memes and similar forms of humor. AI doesn’t laugh.

To their credit, many of the early architects of the internet see this legislation for the threat that it is and have spoken passionately against it. They understand the threat posed to innovation and the free exchange of ideas, but they naively believe those who wrote the legislation do not. “Indeed, if Article 13 had been in place when the Internet’s core protocols and applications were developed, it is unlikely that it would exist today as we know it,” warned a letter signed by 70 web pioneers in opposition to the law.

The way the web developed the first time was not ideal for centralized power structures. Only a nuclear option like Article 13 could ever hope to rein in the human potential unleashed by the web and give them a second chance to get it right.

Article 13, the internet’s founding fathers warn, means the “transformation of the Internet from an open platform for sharing and innovation, into a tool for the automated surveillance and control of its users.” That’s a feature, not a bug. Keeping out small platforms that could challenge the monopolies that have shown they’re willing to work with governments certainly makes life easier for those governments. The internet once held the promise to liberate humanity. The European Parliament believes that’s too big a risk to take.