11 April 2019 – WikiLeaks founder Julian Assange was expelled from the Ecuadoran Embassy here today and arrested on a U.S. hacking charge — maneuvers that initiated a potentially years-long legal battle over his extradition and reignited debates about press freedom.

With Assange’s arrest, U.S. and British authorities ended a seven-year saga in which the anti-secrecy crusader stayed just beyond their reach while his group dumped classified and politically volatile materials onto the Internet. U.S. prosecutors confirmed for the first time that they had secretly charged Assange last year with conspiring with an Army intelligence analyst to illegally obtain secret U.S. military and diplomatic documents, which Assange’s group published online. He is accused of helping Chelsea Manning, the former soldier then known as Bradley Manning, perhaps unsuccessfully, try to crack a government password.

It could be some time, though, before he answers to that charge in an American court. Analysts say Assange’s extradition could take years, and only after he is in the United States can he begin what is expected to be a vigorous defense, arguing that he is like any newspaper publisher and that the charge against him is unjust.

It is possible, too, that U.S. prosecutors could seek to bring more charges. The indictment, unsealed in federal court in the Eastern District of Virginia, mentioned only the 2010 publishing of military and diplomatic documents. It alleged that Assange conspired with Manning to obtain those materials.

The indictment made no reference to WikiLeaks’ more recent publishing of secret CIA hacking tools or its release of Democrats’ emails, which authorities have said were stolen by Russia to affect the 2016 presidential election. President Trump once celebrated the organization for publishing those emails.

London’s Metropolitan Police, who took Assange into custody after Ecuador rescinded his asylum, said that the 47-year-old was “arrested on behalf of the United States.” British authorities originally sought custody of Assange for jumping bail after Sweden requested his extradition in a separate case stemming from sexual assault allegations. The U.S. indictment was unsealed hours after Assange’s arrest.

Video of the arrest showed a gray-bearded Assange being hauled by British police officers down the embassy’s steps and shoved into a police van. He appeared to be resisting. His hands were secured in front of him, clutching a copy of Gore Vidal’s “History of the National Security State.”

Outside of court in London, Jennifer Robinson, one of Assange’s attorneys, said Assange will fight extradition to the United States. She called the action against him “a dangerous precedent for all news media.” Robinson said she was seeking medical care for Assange, whose health she said has suffered during his time in the Ecuadoran Embassy.

The lawyer said Assange told her to thank his supporters and to say, “I told you so,” presumably a reference to Assange’s long-held prediction that the United States would seek his arrest and extradition if he left the embassy. Robinson told The Washington Post that Assange met Thursday morning with the Ecuadoran ambassador, who notified him that his asylum was being revoked. Then the Metropolitan Police were invited into the embassy, where they arrested him, she said.

Assange was quickly found guilty of breaching his bail, an offense that carries a prison sentence of up to 12 months. He pleaded not guilty.

Judge Michael Snow reprimanded Assange and said he demonstrated “the behavior of a narcissist.” The court was told that Assange resisted arrest at the Ecuadoran Embassy, shouting, “This is unlawful!”

Assange is expected to be sentenced for the bail charge at a later date. He is due to appear again in Westminster Magistrates’ Court via video link on May 2 regarding the extradition matter.

Trump — who declared, “WikiLeaks, I love WikiLeaks!” at an October 2016 rally in Pennsylvania — sought to dissociate himself with the group on Thursday.

“I know nothing about WikiLeaks. It’s not my thing. And I know there was something having to do with Julian Assange,” he said. Attorney General William P. Barr will handle the matter, Trump said, adding: “I know nothing really about it. It’s not my deal in life.”

The U.S. indictment, filed in federal court in March 2018 and unsealed Thursday, accuses Assange of agreeing to help Manning break a password to the Defense Department’s computer network in 2010. That, prosecutors allege, would have allowed Manning to log in with another username. The indictment includes no evidence that the password-hacking effort succeeded.

Even before the attempt to learn a password, Manning had given WikiLeaks hundreds of thousands of classified records, prosecutors allege. The material allegedly included four nearly complete databases, composed of 90,000 reports from the Afghanistan war, 400,000 reports from the Iraq War and 250,000 State Department cables.

Manning was imprisoned for seven years for violations of the Espionage Act and other offenses, and was recently jailed again for refusing to testify before the grand jury. Her legal team demanded her release after Assange’s arrest, saying in a statement that Manning’s “ongoing detention can no longer be seriously alleged to constitute an attempt to coerce her testimony.”

Ecuadoran President Lenin Moreno announced April 11 that the country had made the decision to withdraw WikiLeaks founder Julian Assange’s asylum status. (Presidency of Ecuador via Storyful)

Ecuador, which took in Assange when he faced a Swedish rape investigation in 2012, said it was rescinding asylum because of his “discourteous and aggressive behavior,” and for violating its terms.

The British government heralded the development. “Julian Assange is no hero, and no one is above the law,” said Jeremy Hunt, Britain’s foreign secretary. “He has hidden from the truth for years.”

Hunt said it was Assange who was “holding the Ecuadoran Embassy hostage in a situation that was absolutely intolerable for them.” The foreign secretary praised Ecuadoran President Lenín Moreno for making “a courageous decision.”

Sweden dropped its sex crimes inquiry in May 2017. Assange had always denied the allegations.

More than anything, however, he fears extradition to the United States, which has been investigating him for alleged espionage, the publication of sensitive government documents and coordination with Russia.

The Russian government accused Britain of “strangling freedom” by taking custody of Assange.

The Ecuadoran president specifically cited Assange’s involvement in what he described as WikiLeaks’ meddling in the internal affairs of other countries, and referred to the leaking of Vatican documents in January.

WikiLeaks leveraged the arrest as a fundraising opportunity.

“This man is a son, a father, a brother,” the group said in a tweet, above a headshot of Assange. “He has won dozens of journalism awards. He’s been nominated for the Nobel Peace Prize every year since 2010. Powerful actors, including CIA, are engaged in a sophisticated effort to dehumanise, delegitimize and imprison him.”

From Moscow, Edward Snowden, the fugitive American who once was a National Security Agency contractor, described Assange’s arrest as a violation of press freedom.

“Images of Ecuador’s ambassador inviting the UK’s secret police into the embassy to drag a publisher of — like it or not — award-winning journalism out of the building are going to end up in the history books,” Snowden wrote on Twitter. “Assange’s critics may cheer, but this is a dark moment for press freedom.” 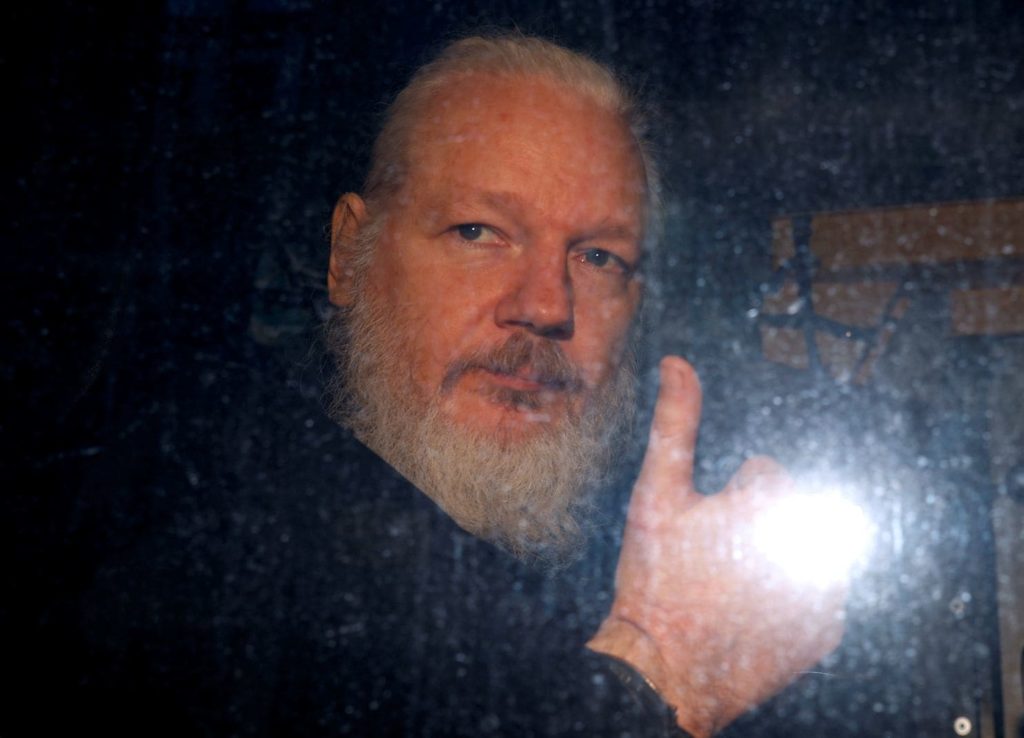 April 11, 2019 | WikiLeaks founder Julian Assange is seen in a police van after he was arrested by British police outside the Ecuadoran embassy in London. (Henry Nicholls/Reuters)

Warner (D-Va.), vice chairman of the Senate Intelligence Committee, had a less charitable take on Assange.

“Whatever his intentions when he started WikiLeaks, what he’s really become is a direct participant in Russian efforts to undermine the West and a dedicated accomplice in efforts to undermine American security,” Warner said. “It is my hope that the British courts will quickly transfer him to U.S. custody so he can finally get the justice he deserves.”

Barry Pollack, Assange’s U.S.-based attorney, said that although the indictment charges Assange with conspiracy to commit computer crimes, the factual allegations against him “boil down to encouraging a source to provide him information and taking efforts to protect the identity of that source.”

Ahead of the U.S. election in 2016, WikiLeaks released tens of thousands of emails that had been stolen from the Democratic National Committee and from Hillary Clinton’s campaign chairman, John Podesta, in hacks that U.S. intelligence officials concluded were orchestrated by the Russian government.

When special counsel Robert S. Mueller III indicted 12 Russian military intelligence officers in July, he charged that they “discussed the release of the stolen documents and the timing of those releases” with WikiLeaks — referred to as “Organization 1” in the indictment — “to heighten their impact on the 2016 presidential election.”

Among the former Trump aides indicted as a result of Mueller’s investigation was Roger Stone, a longtime friend of the president who has been accused of lying, obstruction and witness tampering. Stone’s indictment charged that he sought to gather information about hacked Democratic Party emails at the direction of an unidentified senior Trump campaign official. He has pleaded not guilty.

In the Obama administration, Attorney General Eric H. Holder Jr. decided against pursuing prosecution of Assange out of concern that WikiLeaks’ argument that it is a journalistic organization would raise thorny First Amendment issues and set an unwelcome precedent.

The Trump administration and then-Attorney General Jeff Sessions, however — eager to crack down on the unauthorized disclosure of government information — revisited the question of prosecuting members of WikiLeaks early in the administration. A court filing error in November revealed that Assange had been charged under seal.

Some federal prosecutors say a case can be made that WikiLeaks is not a journalistic organization. As if to lay the groundwork for such an argument, in April 2017, then-CIA Director Mike Pompeo, now secretary of state, characterized WikiLeaks as a “nonstate hostile intelligence service” and a threat to U.S. national security.

Pompeo also noted then that the intelligence community’s report concluding that Russia interfered in the 2016 election also found that Russia’s primary propaganda outlet, RT, “has actively collaborated with WikiLeaks.”

Assange’s expulsion from Ecuador’s embassy reflects a shift in the country’s politics since it first extended refuge to him.

Sebastián Hurtado, president of the political consulting firm Prófitas in Quito, Ecuador, said: “I think the president has never been comfortable with Assange in the embassy. And it’s not like this is an important issue for most Ecuadorans. To be honest, we really don’t care about Assange.”

Another hint that Assange was wearing out his welcome came in March 2018, when Ecuador cut off his Internet access, saying he had breached an agreement not to interfere in the affairs of other states. The embassy did not specify what Assange had done, but the move came after he tweeted criticism of Britain’s assessment that Russia was responsible for the poisoning of a Russian former double agent and his daughter in the city of Salisbury.

Ecuador imposed tighter house rules last fall. Among the demands were that Assange pay for his medical and phone bills and clean up after his cat.

McAuley reported from Paris. Nakashima reported from Washington. Anthony Faiola in Miami, Karla Adam in London, and Rachel Weiner and William Branigin in Washington contributed to this report.