98.3% of Ghana’s Gold Remains in the Hands of Multinational Corporations

The disproportionate focus on corruption of national leaders distracts from the systemic theft of national wealth by multinational corporations. 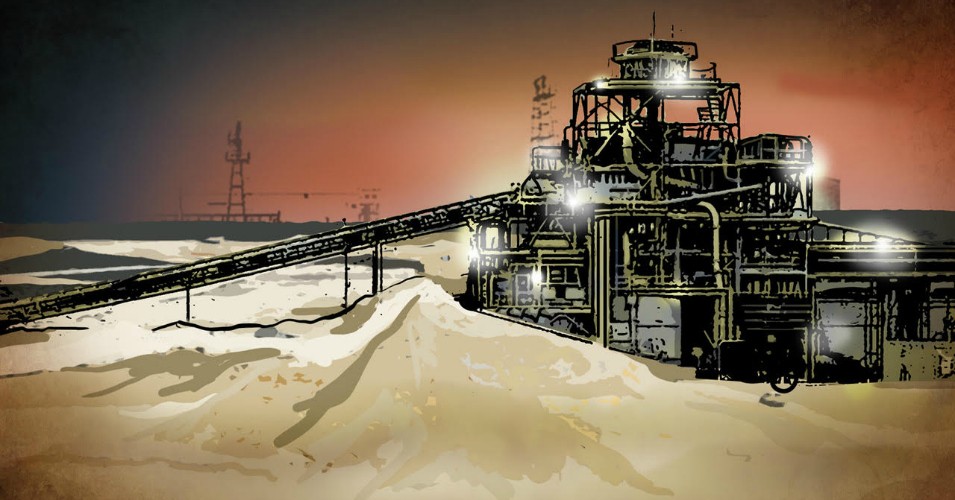 “It is transnational corporations, the stand-ins of yesterday’s British empire—often aided by an enthusiastic national bourgeoisie—that have robbed the Ghanaian people of sovereignty over their resources, their wealth, and their future,” writes Celina della Croce. (Image: Anastasya Eliseeva/New Frame)

22 May 2019 – Every year, the vast majority of Ghana’s natural wealth is stolen. The country is among the largest exporters of gold in the world, yet—according to a study by the Bank of Ghana—less than 1.7 percent of global returns from its gold make their way back to the Ghanaian government. This means that the remaining 98.3 percent is managed by outside entities—mainly multinational corporations, who keep the lion’s share of the profits. In other words, of the $5.2 billion of gold produced from 1990 to 2002, the government received only $87.3 million in corporate income taxes and royalty payments.

Even in cases where the corruption of local governments does exist, the amount of money pilfered pales in comparison to the wealth extracted by transnational corporations.

The dominant discourse propagated by institutions like the International Monetary Fund (IMF) that control the levers of global finance blames the bad governance of local officials for the consequences of this plunder, citing corruption scandals as the main reason for a lack of resources. However, the discourse around bad governance—the idea that corrupt local officials are to blame for endemic poverty, low health indicators, education, and other measures of national well-being—focuses on what happens with the 1.7 percent of the returns that Ghana receives. Sarah Bracking points out that “the company would argue that the market value of output is not synonymous with their surplus, or profits, as working capital, wages, depreciation of machines and so forth must be paid from this. However, the figures do act as a good illustration of the low returns to the sovereign owners of sub-soil resources, as a proportion of their final market value, which, in Africa, can be estimated as typically in the region of between three and five percent, but which in this case is lower (about 1.7 percent).” Holding officials accountable for their use of public funds should be a given, but what about the remaining 98.3 percent of the returns generated by Ghana’s gold exports?

Individuals are blamed, fingers angrily pointed at corrupt governments, while the nations they govern are robbed blind by transnational corporations. It is these corporations, working with institutions like the IMF and the World Bank, that define the terms of this conversation. These international lenders bury borrowing countries with steep interest rates and terms that grant lending institutions the power to determine and approve national policies.

National leaders of countries that fall into the debt trap are forced to forfeit the right to create their own policies for access to loans. These leaders are then blamed for the consequences of policies and terms crafted by lending institutions (a key form of neocolonialism). They are also blamed for the vestiges of hundreds of years of colonialism that came before.

Even in cases where the corruption of local governments does exist, the amount of money pilfered pales in comparison to the wealth extracted by transnational corporations. In other words, robber barons are blaming petty thieves for the consequences of their large-scale robbery schemes. According to the United Nations Conference on Trade and Development (UNCTAD), multinational corporations’ offshore tax hubs result in an estimated $100 billion in annual tax revenue losses for developing countries. Vijay Prashad of Tricontinental: Institute for Social Research calls this phenomenon “tax strikes,” or the idea that “those who hold capital, who are the masters of property, have been—essentially—on strike against regimes of taxation. They use their vast wealth to either hide their money or change tax laws to offer them increasing protections.” Rather than using this money for the social good—to invest in public services, infrastructure, health, or education—they use it to increase their own wealth, often by “inflat[ing] the stock market and various asset bubbles.”

Comparatively, during a 2013 keynote address, World Bank President Jim Yong Kim cited that corruption in the form of bribery and theft by government officials costs developing countries between $20 billion and $40 billion each year. In other words, by a rough calculation, the amount that corrupt government officials cost developing countries is anywhere from 40 to 80 percent less than half of the amount that these nations lose in offshore tax havens.

The real power, then, remains in the hands of multinational corporations, which not only make off with vast sums of wealth belonging to the “darker nations,” but also continue to exercise control over nations in the Global South, where they use access to finance as a lever to impose policies that benefit themselves at the expense of the people who live there.

When local leaders are deemed too much of a threat to multinational corporations’ interests, they are quickly deposed through coups, as we saw in Haiti (2004) and Honduras (2009), or destabilization campaigns, as we see in Venezuela today.

When local leaders are deemed too much of a threat to multinational corporations’ interests, they are quickly deposed through coups, as we saw in Haiti (2004) and Honduras (2009), or destabilization campaigns, as we see in Venezuela today. Kwame Nkrumah, a leader in Ghana’s independence struggle and the country’s first president, referred to this process as neocolonialism. “The essence of neo-colonialism is that the State which is subject to it is, in theory, independent and has all the outward trappings of international sovereignty. In reality its economic system and thus its political policy is directed from outside,” Nkrumah wrote in his book Neo-Colonialism, the Last Stage of Imperialism. Through organizations like the IMF and World Bank, former colonialists would strive for “the general objective … to achieve colonialism in fact while preaching independence.”

Fifty-four years after Nkrumah wrote Neo-Colonialism, The Last Stage of Imperialism (1965) and 62 years after Ghana’s independence from Great Britain (1957), Nkrumah’s assessment remains as clear and relevant as ever. The preferred words of imperialism have shifted, but the underlying structure remains the same: a system where an illusion of freedom obscures the power relations and where monopoly capital, in the form of transnational corporations and lending institutions, exercises control over the country’s economic and political reality.

The narrative of today’s neocolonialists blames “bad governance” as the obstacle to a better future in which Ghanaians benefit from their vast mineral wealth, as Gyekye Tanoh of the Third World Network (Africa) points out in his recent interview with Tricontinental: Institute for Social Research. According to this trope, the corruption of local governments is to blame. However, this narrative leaves out of the picture the pillage of natural resources and exploitation of labor by colonizers (Great Britain, in the case of Ghana).

Not only were the systems to process crude forms of minerals such as oil and gold not developed by colonizers, but the country’s reliance on foreign capital to buy and process these resources has kept the country in a position similar to its colonial status pre-1957, as Nkrumah predicted, where transnational corporations, rather than the state of Great Britain, keep the vast majority of revenues produced from Ghanaian gold and other resources. Tanoh explains: “[t]he entire system that was set in place since the 1980s to force countries to rely upon raw material exports and to become dependent on foreign buyers is what leaves countries like Ghana with such a minuscule amount of the wealth taken from Ghana’s land. ‘Good governance’ is not going to solve this, unless ‘good governance’ refers as well to the deep structural dynamics.”

Pointing a proverbial finger at those responsible for the distribution of 1.7 percent of wealth generated and framing them as the main culprits of corruption, poverty, and underdevelopment, is not just reckless and irresponsible; it is part of a systemic narrative that deflects attention away from the real thieves.

Pointing a proverbial finger at those responsible for the distribution of 1.7 percent of wealth generated and framing them as the main culprits of corruption, poverty, and underdevelopment, is not just reckless and irresponsible; it is part of a systemic narrative that deflects attention away from the real thieves: the multinational corporations that preside over the 98.3 percent of the remaining wealth. It is intellectually dishonest to ignore the broader historical context that is responsible for the low returns of Ghanaian gold to Ghanaian citizens. True bad governance is the appropriation of 98.3 percent of wealth produced by Ghanaian resources that lines the coffers of transnational corporations instead of being returned to benefit the Ghanaian people.

Of the 10 top multinational firms that operate on the African continent, only one (Vale, of Brazil) is located in the Global South. Of the remaining nine, three are United States corporations, three are Canadian, two are Australian, and one is British. All are private transnational corporations. In other words, the gold that is extracted from Ghanaian soil (like the natural wealth extracted from across the African continent and Global South) is immediately handed over to multinational corporations—almost entirely based in and controlled by the Global North (or, at best, by the national elite)—to be processed, refined, and distributed. Death, rape, and preventable illnesses that plague those who work in or live near the mines are rampant in the area where these companies operate (as illustrated by Tricontinental: Institute for Social Research’s latest briefing).

Though Ghana won its independence in 1957, the vestiges of colonialism and underdevelopment did not magically leave with it. Under colonialist rule, resources were extracted from former colonies—like Ghana—to sustain the wealth of their colonizers. Wealth produced from gold (further enhanced by enslaved or bonded labor) quickly left the country, promoting development in England while leaving Ghana void of the infrastructure to develop or refine its own resources, and leaving its people without access to basic services.

To accept the narrative on bad governance is to forfeit what Fidel Castro called the Battle of Ideas. It is to let the powerful—transnational corporations, and the web of institutions that protects their interests, from the IMF to corporatized non-profits and mainstream media—define the terms of the conversation on development, sovereignty, and the lives of the people who inhabit the resource-rich land. It is to forfeit the control of Ghanaian resources to transnational corporations, the very thieves of the majority of the country’s wealth, under the false pretext that they are incapable of managing it themselves. To quote Gyekye, “the language of ‘good governance’… implies that it is only the aberrant behaviors of the public officials that should be seen as corruption. Yet of course the lack of resources available to accountable public institutions makes it impossible to create or sustain meaningful domestic anti-corruption mechanisms.”

It is intellectually dishonest to blame local leaders as the main culprits for bad governance, conveniently leaving multinational corporations out of the picture. It is the vestiges of colonialism, and its continued neocolonialist forms, that deprive the Ghanaian people of the right to process, develop, and manage their natural wealth and to be the drivers of their own policies—in other words, their right to national sovereignty. It is transnational corporations, the stand-ins of yesterday’s British empire—often aided by an enthusiastic national bourgeoisie—that have robbed the Ghanaian people of sovereignty over their resources, their wealth, and their future.

Celina della Croce is a coordinator at Tricontinental: Institute for Social Research as well as an organizer, activist, and advocate for social justice. Prior to joining Tricontinental Institute, she worked in the labor movement with the Service Employees Union and the Fight for 15, organizing for economic, racial and immigrant justice.