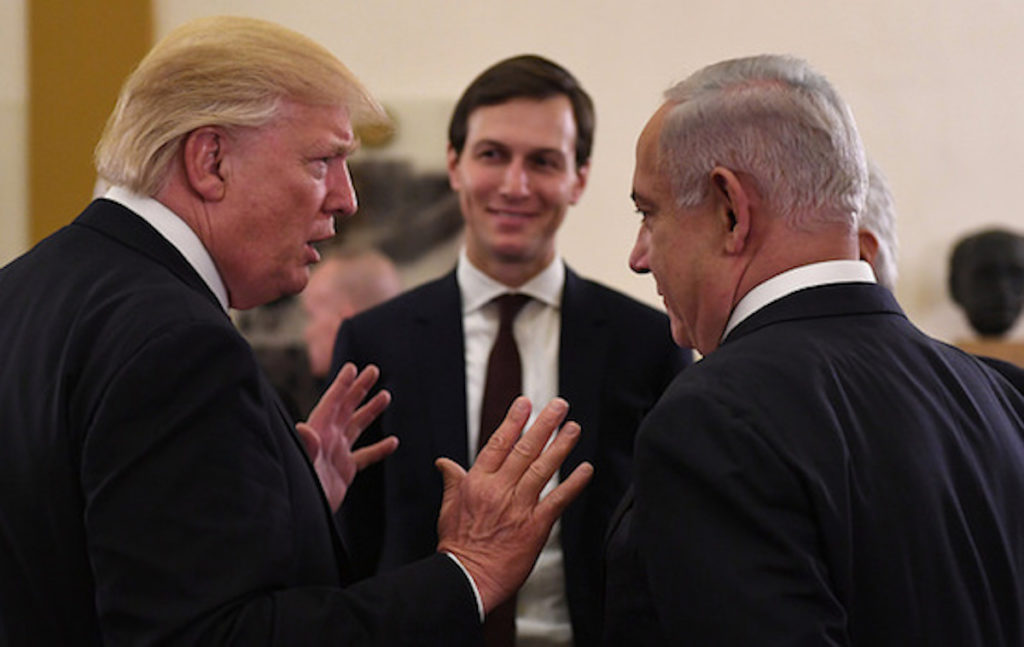 7 May 2019 – A leaked document of “main points” from the Trump administration’s so-called “deal of the century” was published today by Yisrael Hayom, outlining a plan for a two-state solution that includes the creation of a demilitarized state of “New Palestine,” Israeli annexation of all settlements in the West Bank, a land deal with Egypt, and shared capitals in Jerusalem.

If either Israel or the Palestinians, including Hamas and the PLO, reject the deal, the document says the U.S. will impose steep penalties. The U.S. will cut off all aid to Israel and ensure “no country in the world transfers money” to the Palestinians, whose economy is reliant on foreign donors.

If the PLO accepts the plan and Hamas or Islamic Jihad in Gaza reject it, the document warns “the U.S. will back Israel to personally harm leaders of Hamas and Islamic Jihad” in a future escalation, and will hold Hamas’ leadership “responsible in another round of violence between Israel and Hamas.”

The plan goes on to caution, “It is inconceivable that a group of a few dozen will determine the lives of millions of people,” which echoes similar sentiments made by Kushner last week.

Yisrael Hayom reported the document was shared by officials in Israel’s Ministry of Foreign Affairs, although the newspaper could not confirm the identify of the drafter or authenticate the details of the peace plan. It was published with the caveat “Here’s the message. You judge,” and a response from an unnamed senior White House official who is quoted as calling the report “speculative” and “inaccurate.”

Mondoweiss was not able to independently verify the accuracy of the document. Some of the line items in the agreement are consistent with previous reporting on unconfirmed line items of the deal.

While the plan includes a general framework for final status issues such as borders and Jerusalem, as Kushner said his deal would last week, it also is comprised of specific details for an economic relationship between the proposed Palestinian state and Israel. A toll road in the West Bank, and the Palestinians would pay Israel a sum for providing security.

The deal includes significant financial support from the U.S., Europe and the Gulf states to the new Palestinian state, to a tune of $30 billion over five years, with additional support for specific development projects from Australia, Canada, Japan and South Korea. Most of the funding will come from “oil producing countries,” described as “the main beneficiaries of this agreement.”

Creation of a “New Palestine”

The plan calls for the creation of a Palestinian state in the West Bank and Gaza, and cedes all territory held by Israeli settlements and settlement blocs to Israel. Likely, this would mean the plan would annex a majority of Area C of the West Bank, around 62 percent. The entirety of the Jordan Valley, about 30 percent of the West Bank, will be annexed to Israel. It is unclear if the Palestinians who reside there, around 65,000, will become citizens of the state of Israel. The plan further states the main highway in the Jordan Valley, Route 90, “will turn into a four-lane toll road.” It is unclear if Palestinians will have access to this road.

The Palestinian state will control two international borders with Jordan, likely turning over the Israeli controlled Allenby crossing between the West Bank and Jordan.

New Palestine will have a local police force who will be allowed to hold “light weapons.” The new Palestinian state will be prevented from forming a military. Israel will be responsible for security for a fee paid by the Palestinian government.

Jerusalem as a shared capital

Jerusalem will be a shared capital for both Israel and New Palestine. The deal underscores that Jerusalem “will not be divided.”

Today Jerusalem is home to some 350,000 Palestinian residents who are neither citizens of Israel or West Bank residents, and 550,000 Israelis, including around 200,000 settlers in East Jerusalem. Under the agreement all Israelis and Palestinians will be able to stay where they are living, but Israelis will no longer be able to purchase homes from Palestinians, potentially abruptly ending future expansion of East Jerusalem settlements. The deal would also bar Palestinians from buying homes from Israelis, which they are currently able to do.

While previous peace accords have agreed to principles of land swaps between Israel and the Palestinian Authority, the Trump deal reportedly calls on a lease of territory from Egypt for the creation of an airport and industrial zone.

“Egypt will lease new land to Palestine for the purpose of establishing an airport for the establishment of factories and commerce, and for agriculture, other than housing,” the plan said, “The size of the territories and the price will be determined between the parties through the mediation of the supporting countries.”

Under the deal Gaza would significantly open up to the outside world, albeit with the removal of Hamas’ military capabilities. Hamas would be required to turn over all weapons to Egypt.

Within one year New Palestine would hold elections where “every Palestinian citizen will be able to stand for election.”

The agreement notes “all the borders of the Strip will be open to the passage of goods and workers to Israel.” Gaza will be accessible to the West Bank through the creation of a land bridge.

The plan includes an additional Palestinian demands from past negotiations. Palestinian prisoners will be released over the course of three years. However, Palestinian refugees who today number some 7 million are excluded entirely from the document.

Allison Deger is the Assistant Editor of Mondoweiss.net.

2 Responses to “Report: Leaked Draft of Trump’s Peace Plan Reveals Creation of ‘New Palestine,’ Promises to Join Israel in Next War in Gaza if Palestinians Reject”