The Bottom Line: Go for the Money

24 May 2019 – It’s rare to hear business magazines admit the power of nonviolent action. As the editor of Nonviolence News, a service that collects and shares 30-50+ stories of nonviolence in action each week, I often see business journals minimizing the effect of activism.

Usually, industry tries to conceal the impact nonviolent action has on their bottom line by chalking it up to market pressures — as with the case of Shell’s Arctic drilling rig. Business magazines credited falling fossil fuel prices with the decision to withdraw from drilling in the Arctic. Beneath that story, however, the reality was that hundreds of kayaktivists in the Shell No campaign blockaded the oil rig all the way from Portland, OR to Seattle, WA, to Alaska, eventually succeeding in stopping the drilling project.

That’s why I was glad to see an honest admission of activists’ impact in Newsweek recently. An article blared the news that a first quarter securities filing from private prison company GEO Group warned their investors that activism poses a risk to their bottom line. Due to widespread resistance to mass incarceration and the school-to-prison pipeline to nationwide outrage over family separation policies, private prisons and detention centers are facing the heat of a (rightfully) outraged public.

GEO Group’s admission offers an important reminder to activists: go for the money. Unlike politicians (whose risks are measured in two-four-six year election cycles), businesses measure their risks and profits every day, and report to financial committees every three months. The knowledge of how activists can impact industry is powerful, especially if used strategically. In Quebec, after learning how much money per day activists could cost a fracking company, an anti-fracking campaign drafted a plan of action, calculated the multi-million dollar price tag, and circulated that information to the press and shareholders. For years, the fracking industry stayed out of Quebec.

Shareholders and investors are particularly important targets for activist groups. Unlike industry professionals, their interest – and loyalty – lies with profit, not the industry itself.  Shareholders are fairly responsive to activist campaigns, voting to halt or change company policy to respond to the demands. An on-going, decades-long campaign against Monsanto has Bayer shareholders screaming over the “nightmare” of the Monsanto merger as 500 protesters showed up to demonstrate outside the meeting. Potential investors watch the risks posed by public dissent and often withdraw from a controversial and embattled industry. The Standing Rock protests against the Dakota Access Pipeline led directly to three major banks pulling out the project and triggered a global wave of fossil fuel related divestments.

Divestment campaigns are powerful. Organized among colleges and universities, retirement and public funds, and religious and faith institutions; divestment campaigns pressure organizations to withdraw their investment funds from certain industries (ideally moving the money into more ethical and just investments). In 2015, the Earth Quaker Action Team won a campaign to stop PNC Bank from bankrolling mountaintop removal, getting them to divest from coal mining. 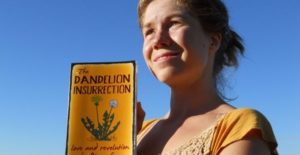 Beyond shareholders and investors, industry also faces myriad pressures from concerned consumers, organized workers, and suppliers with ethical concerns. Italian dock workers refused to load a Saudi arms ship headed to Yemen, stating that they refused to be complicit in the conflict. Tech workers forced Google to drop a major military surveillance contract called Project Maven. Over 6,000 Amazon employees called on Jeff Bezos and the company’s board to adopt a climate plan that will transition the company to 100 percent renewable energy by 2050. Across the United States, strikes are on the rise: 2018 was a record-breaking year and 2019 is on track to exceed those numbers.

These campaigns are changing the face of industry far more effectively — and swiftly — than government policy, legislative changes, or regulatory enforcement. Citizens are finding creative and powerful ways to pressure business, target destructive practices, and stop abuses. Using the tools of nonviolent action, people have hundreds of tactics at their disposal. More and more, we’re seeing people put these tools and tactics to use as they strive for real change in our world. The bottom line of all these stories is: go for the money. With divestment, strikes, boycotts, shareholder action, and more, find strategic and creative ways to pressure business into taking more ethical, just, peaceful, and sustainable practices.

Author/Activist Rivera Sun is the editor of Nonviolence News, author of The Dandelion Insurrection and other books, and the Programs Coordinator for Campaign Nonviolence.

Anticopyright: Editorials and articles originated on TMS may be freely reprinted, disseminated, translated and used as background material, provided an acknowledgement and link to the source, TMS: The Bottom Line: Go for the Money, is included. Thank you.