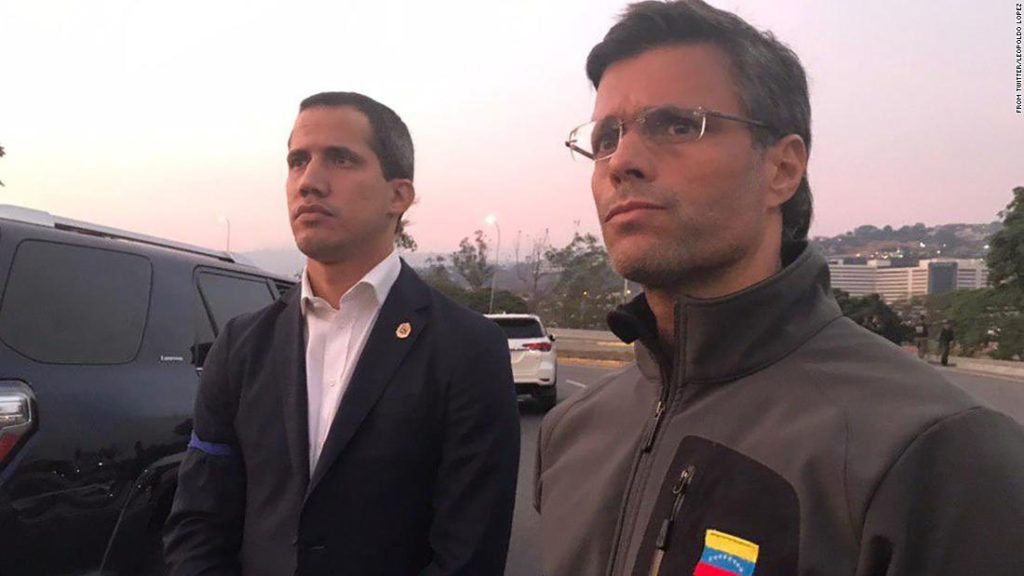 The thwarted uprising started in the early morning hours when renegade military and intelligence officers reportedly released Lopez from house arrest. Lopez then joined Guaido and a handful of soldiers on the Altamira overpass in east Caracas, outside the Francisco de Miranda airbase, known as La Carlota.

Lopez and Guaido released videos on social media, calling on the armed forces to back their efforts and urging supporters to take to the streets, in what they termed as the “final phase” of the so-called “Operation Freedom.” Large crowds of anti-government protesters, as well as opposition lawmakers, made their way to the Altamira overpass.

The scene then saw armed confrontations between the soldiers that backed Juan Guaido and those inside La Carlota airbase. According to witnesses in La Carlota, the Venezuelan armed forces fired tear gas towards the Altamira overpass, where civilian protesters began to gather, whereas Guaido’s soldiers returned live fire. Riot police also appeared on the scene to try and disperse the crowds. There are reports of protesters wounded and arrested that are unconfirmed at the time of writing.

At the same time, many of the originally deployed soldiers withdrew from the scene, later revealing that they had been “deceived” by their superiors. Simultaneously, Chavista leaders took to state and social media to denounce what they termed a coup in progress, and large crowds gathered to defend Miraflores Presidential Palace.

Guaido later attempted to lead a march, including some armed soldiers, into western Caracas but was stopped by Venezuelan National Guard forces in Chacaito, some 10 kilometers away from Miraflores.

Leopoldo Lopez was later reported to have joined his family in the Chilean Embassy. However, the Chilean ambassador subsequently explained on Twitter that Lopez and his family had instead moved to the Spanish Embassy, in what he termed a “personal choice.” Lopez was serving a 13 year sentence for his role in the deadly 2014 anti-government protests, which was later commuted to house arrest.

Brazilian authorities also confirmed at the time that 25 soldiers who had taken part in the failed insurrection had taken refuge in the Brazilian embassy in Caracas. 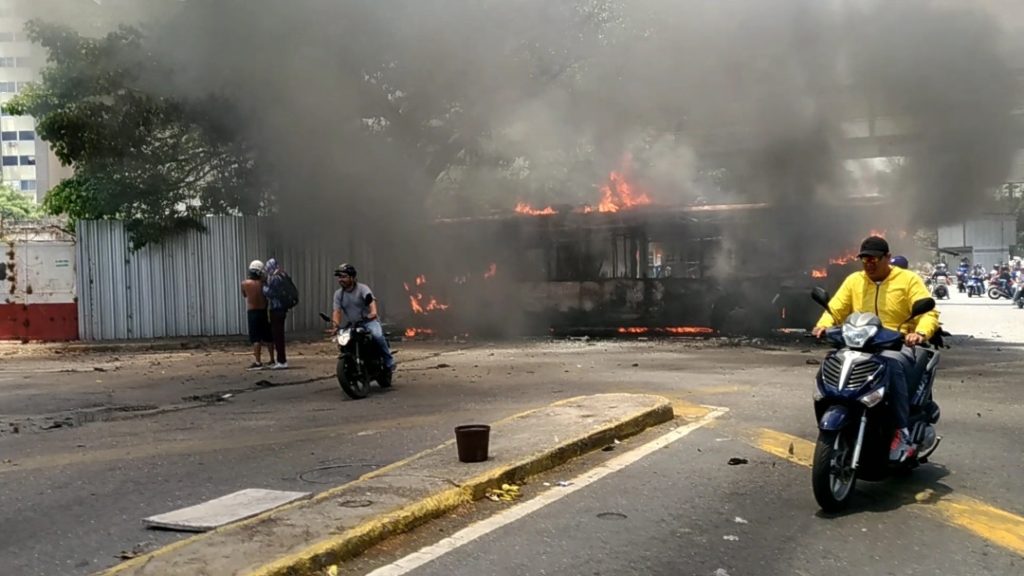 For his part, Guaido was absent for several hours before releasing a video on social media in the evening, calling on his supporters to take to the streets on Wednesday to continue the “final phase” of “Operation Freedom.”

The opposition leader went on claim President Maduro “does not have the support of the armed forces,” and vowed that his efforts to oust the Venezuelan government continue “as strong as ever.”

The day saw several localised outbreaks of violence in Caracas and several other cities, with protesters setting up burning barricades and authorities responding with rubber bullets and tear gas. Violent protests were particularly focused in traditional opposition strongholds of eastern Caracas, including outside La Carlota airbase. At the time of writing there are still reports of blocked roads and detonations.

Venezuelan President Nicolas Maduro addressed the country in a televised speech on Tuesday evening, accusing those responsible for the military uprising of trying to provoke a “massacre” and lauding the armed forces for their restraint in avoiding direct confrontations.

“Who benefits from these [confrontations]? Who finances them? Undoubtedly the leadership of the terrorist ultra-right party Popular Will,” Maduro declared, referring to the party of Lopez and Guaido.

He added that today’s actions would not go “unpunished,” explaining that eight military officers and policemen were wounded in the armed confrontations, before going on to blast US leaders for their role in endorsing the coup attempt. Maduro also showed his appreciation for the tens of thousands who mobilized to defend the presidential palace beginning in the early hours of Tuesday.

The Venezuelan president, who was accompanied by high-ranking political and military leaders, ended his speech by calling for a “massive mobilization” on May 1st to celebrate workers’ day and “defend peace.”

US officials also weighed in during the day, with National Security Advisor John Bolton warning Defense Minister Vladimir Padrino and Supreme Court President Maikel Moreno that this was their “last chance” to support Guaido. President Donald Trump likewise tweeted that the US “stands with the People of Venezuela and their Freedom!”

The European Union High Representative for Foreign Affairs Federica Mogherini issued a statement in the afternoon, rejecting “any form of violence” and urging “restraint,” in contrast with European Parliament President Antonio Tajani, who tweeted his support for the unfolding coup. For his part, UN Secretary General also called for “maximum restraint” and for “immediate steps” to be taken to restore calm.

Edited by Lucas Koerner from Caracas.