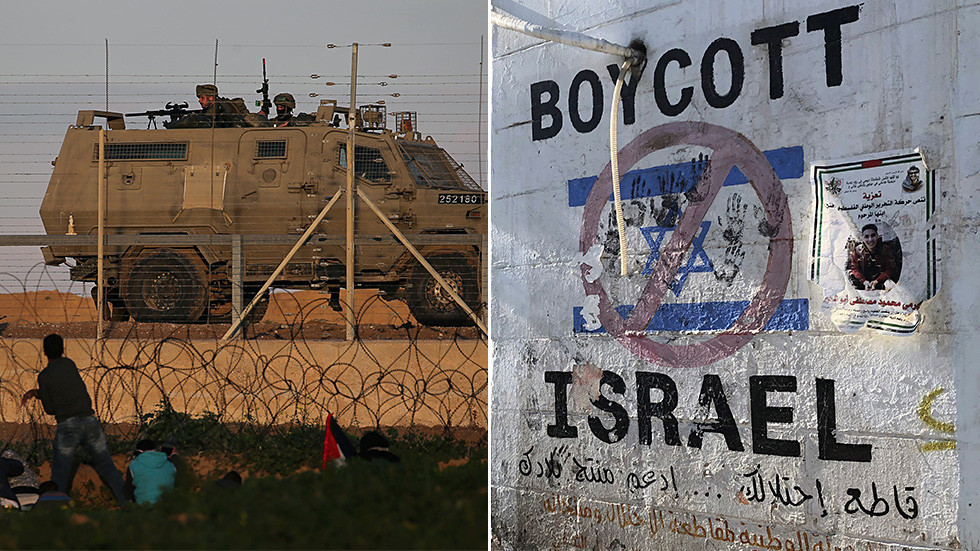 26 May 2019 – Israeli criticism of the Boycott, Divestment and Sanctions (BDS) campaign is somewhat justified, but those who won’t equally blast the apartheid politics of the state of Israel have no moral high ground from which to preach.

First off, a confession. I’ve always had a problem with the BDS movement which promotes various forms of embargoes against Israel until it meets its obligations under international law (which are withdrawal from the occupied territories, removal of the separation barrier in the West Bank and full equality for Arab-Palestinian citizens of Israel).

While I fully support these goals, my reluctance towards BDS was based on two main reasons. One, in the current situation when anti-Semitism really is alive in Europe, it’s dangerous to play with the idea of blacklisting. Two, why should we not also boycott China for what the Chinese state is doing to Uyghurs?

Of course, the cynical response from my BDS friends is that such tactics would not work on China but may work against Israel. But are they for real? Such reasoning implies weird ethics: punish the relatively weak, not the really bad.

Here is an example of the excess of BDS. When, a couple of years ago, I visited the Jerusalem film festival to promote the pro-Palestinian film of my friend Udi Aloni, I was attacked for participating in an Israeli state sponsored event.

A BDS fanatic asked me if I was aware how my visit to Jerusalem was the same as journeying to Berlin in 1938? Indeed, there was even an ‘open letter’ circulating on the web which criticized me for accepting the invitation.

My reply was: the visit was paid by myself and Udi and I was presented by Udi as his personal quest, not the festival’s guest. Plus if we leave aside the problematic nature of the parallel between Jerusalem and the Nazi Berlin, yes, if I were to be invited to Berlin in 1938 to promote a film celebrating Jewish resistance to the Nazis, I would have gladly accepted it. Not that Hitler’s regime would have allowed it, naturally.

However, when, in May 2019, the German Bundestag passed a non-binding resolution declaring BDS anti-Semitic, alarm bells began to ring. Because the idea of BDS being anti-Semitic is questionable.

For instance, all my links to BDS are through Jewish friends who are part of it, and this was the idea from the beginning: a joint action of West bank Palestinians with Israeli Jews who oppose the occupation of the West Bank.

Thus, quite obviously, something else is going on here: an obscene and diabolical pact between Zionists and true European racists. As a consequence, the sacred memory of the Holocaust is being mobilized to legitimize the corrupted politics of today: the apartheid practiced against Palestinians. And it’s those who do it who are the true desecrators of the Holocaust.

The privileged role of Jews in the establishment of the sphere of the “public use of reason” hinges on their subtraction from every state power. It’s this position of the “part of no-part” of every organic nation state community, not the abstract-universal nature of their monotheism, which makes them the immediate embodiment of universality.

And it’s this uncanny Jew who is the object of what one cannot but designate as “Zionist anti-Semitism,” the foreign excess disturbing the nation state community. These Jews, the “Jews of the Jews themselves,” worthy successors of Spinoza, are today the only Jews who continue to insist on the “public use of reason,” refusing to submit their reasoning to the “private” domain of the nation state.

This paradox of Zionist anti-Semitism enables us also to solve another enigma: how can US Christian fundamentalists, who are by their nature anti-Semitic, now passionately support the Zionist policy of the state of Israel? There is only one solution to this enigma: it is not that the US fundamentalists changed, it is that Zionism itself, in its hatred of the Jews who do not fully identify with the politics of the state of Israel, paradoxically became anti-Semitic, i.e., they constructed the figure of Jews who doubt the Zionist project along the anti-Semitic lines.

If you want further proof of this, remember how just before the last Israeli elections, on March 19, a campaign advert was released in which Ayelet Shaked, the right-wing justice minister, moving in slow motion, appears to be modeling for a luxury perfume.

The perfume bottle label reads “Fascism,” and while Shaked sprays herself with it, the narrator’s voice is heard: “Judiciary revolution. Reducing activism. Appointment of judges. Governance. Separation of authorities. Restraining of the Supreme Court.” Finally the minister breaks the fourth wall and addresses directly the camera, saying: “Smells like democracy to me.”

The (rather clumsy) irony of the ad is clear: Shaked’s left-liberal critics attack her for (what they perceive as) the fascist elements in her program (and in the measures enforced by her ministry). But in her reply to these critics, she ironically assumes the term ‘fascist,’ while the voice lists her actual measures which are democratic.

Although Shaked tried to overcome Netanyahu from the right, Netanyahu took the same path in his statements on Instagram where, after asserting that all citizens of Israel, including Arabs, had equal rights, he added: “Israel is not a state of all its citizens.” This referred to the controversial law passed last year declaring Israel to be the nation state of the Jewish people.

Yet, we would come closer to truth if we simply turned Shaked’s ad on its head – she instead sprays herself with a perfume called “democracy” while a narrator enumerates her achievements: the apartheid system with second-class citizens, leaving more than a million of Palestinians in a legal limbo, bombings of civilians… and then a passer-by (not Shaked herself) comments: “Smells like Fascism to me.”

The true political goal of the ongoing campaign against BDS is to legitimize the stance shared by Shaked and Netanyahu. Our answer to all those who support this campaign should thus be: those who are not ready to criticize the apartheid politics of the state of Israel should also keep silent about the possible excesses of BDS.