Kierkegaard on the Individual vs. the Crowd, Why We Conform, and the Power of the Minority

“Truth always rests with the minority … because the minority is generally formed by those who really have an opinion, while the strength of a majority is illusory, formed by the gangs who have no opinion.” 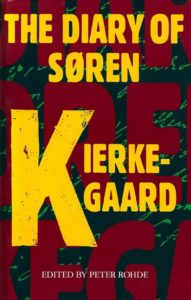 “When you adopt the standards and the values of someone else,” Eleanor Roosevelt wrote in her spectacular meditation on happiness and conformity, “you surrender your own integrity [and] become, to the extent of your surrender, less of a human being.” And yet conformity is not only a survival strategy for us but also something institutionally indoctrinated in our culture.

A century earlier, the great Danish writer and thinker Søren Kierkegaard (May 5, 1813–November 11, 1855), celebrated as the first true existentialist philosopher and an active proponent of the benefits of keeping a diary, contemplated this eternal tension between the individual and the crowd. Writing in The Diary of Søren Kierkegaard (public library) — the same fantastic window into his inner world that gave us Kierkegaard’s prescient insight on the psychology of online trolling and bullying — he considers how our incapacity for quiet contemplation cuts us off from our true self and instead causes us to adopt by passive absorption the ideals of others.

Lamenting the tendency to take our values from the “very loud talk” of the crowd rather than by “each individual going alone into his secret closet to commune quietly with himself” — something he had come to consider the root of our unhappiness — he writes:

One can very well eat lettuce before its heart has been formed; still, the delicate crispness of the heart and its lovely frizz are something altogether different from the leaves. It is the same in the world of the spirit. Being too busy has this result: that an individual very, very rarely is permitted to form a heart; on the other hand, the thinker, the poet, or the religious personality who actually has formed his heart, will never be popular, not because he is difficult, but because it demands quiet and prolonged working with oneself and intimate knowledge of oneself as well as a certain isolation. 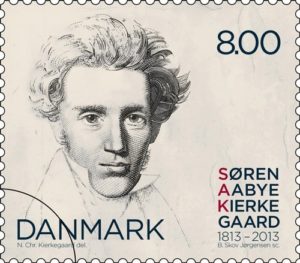 A year later, in 1847, Kierkegaard revisits the question of the individual and the crowd:

The evolution of the world tends to show the absolute importance of the category of the individual apart from the crowd… But as yet we have not come very far concretely, though it is recognized in abstracto. That explains why it still impresses people as prideful and overweening arrogance to speak of the separate individual, whereas this precisely is truly human: each and every one is an individual.

And yet, Kierkegaard argues, most of us find it too daunting to live as individuals and instead opt for the consolations of the crowd:

Most people become quite afraid when each is expected to be a separate individual. Thus the matter turns and revolves upon itself. One moment a man is supposed to be arrogant, setting forth this view of the individual, and the next, when the individual is about to carry it out in practice, the idea is found to be much too big, too overwhelming for him. 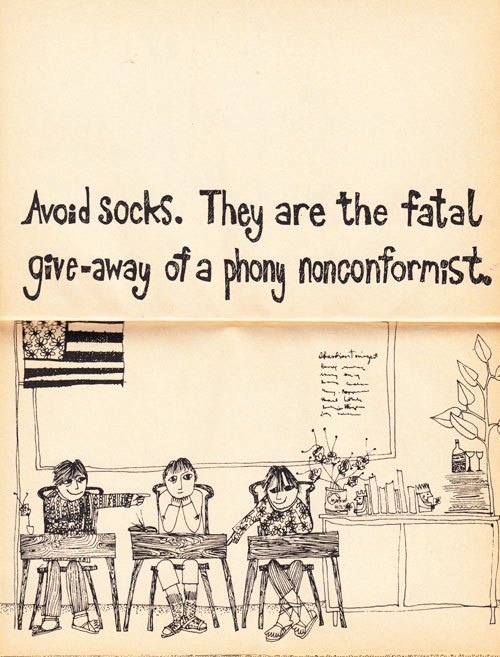 Illustration from How to Be a Nonconformist, a 1968 satire of conformity-culture written and illustrated by a high school girl.

Conformity becomes our hedge against this overwhelming idea:

Of course it is more secure to have a solid position in life, some official appointment which does not demand nearly as much of one… Most people lead far too sheltered lives, and for that reason they get to know [the divine] so little. They have permanent positions, they never put in their utmost effort…

Another year later, he returns to the subject and argues that the real arrogance is not in living up to our individuality but in denying it, and in effect denying the individuality of others:

Each human being has infinite reality, and it is pride and arrogance in a person not to honor his fellow-man…. It is a paralogism that one thousand human beings are worth more than one… The central point about being human is that the unit “1” is the highest; “1000” counts for less.

Two years later, in 1850, Kierkegaard makes a poignant case for the vital role of the minority as an antidote to the chronic groupthink of the majority:

In regard to Truth, this troublesome monster, the majority, the public, etc., fares in the same way as we say of someone who is traveling to regain his health: he is always one station behind.

Two centuries before Zadie Smith wrote about the privilege of self-actualization, Kierkegaard is keenly aware of the class element in this interplay between minority and majority, between the individual and the crowd:

I want people to sit up and take notice, to prevent them from idling away and wasting their lives. Aristocrats take it for granted that a lot of people will always go to waste. But they keep silent about it; they live sheltered lives pretending that all these many, many people simply do not exist. That is what is ungodly about the superior status of the aristocrats; in order to be comfortable themselves they do not even call attention to anything.

Vowing not to be like the aristocrats himself, he — a self-described “complete composite of dialectics” — offers his own solution:

I will call the attention of the crowd to their own ruination. And if they don’t want to see it willingly, I shall make them see it by fair means or foul. Please understand me — or, at least, do not misunderstand me. I do not intend to beat them… I will force them to beat me. Thus I actually compel them. For if they begin to beat me, they will probably pay attention; and if they kill me, they most definitely will pay attention, and I shall have won an absolute victory.

Kierkegaard’s rationale behind this strategy is rather humanistic in considering what it takes to awaken the individual human spirit from the trance of the crowd:

[Individuals] are not so corrupt that they actually wish to do evil, but they are blinded, and don’t really know what they are doing. It is all a matter of baiting them for decisive action… A crowd triumphs if one cedes the way, steps aside, so that it never comes to realize what it is doing. A crowd has no essential viewpoint; therefore if it happens to kill a man it is eo ipso halted; it pays heed and comes to its senses.

Nobody wants to be this strenuous thing: an individual; it demands an effort. But everywhere services are readily offered through the phony substitute: a few! Let us get together and be a gathering, then we can probably manage. Therein lies mankind’s deepest demoralization. 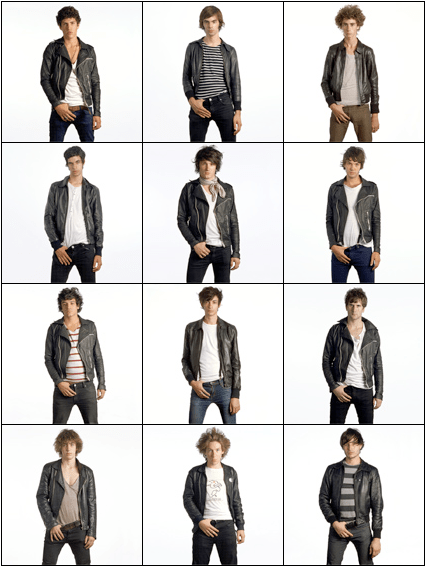 Photographs from ‘Exactitudes,’ a global project highlighting the implicit conformity of subcultures.

But Kierkegaard’s most poignant point arrives shortly before his death, in 1854, when he addresses with prescient precision our modern anxiety about being alone, stressing its absolute vitality in living up to our individual potential:

The yardstick for a human being is: how long and to what degree he can bear to be alone, devoid of understanding with others.

A man who can bear being alone during a whole life-time, and alone in decisions of eternal significance, is farthest removed from the infant and the society-person who represent the animal-definition of being human.

In a remark to which Anne Lamott might have the perfect response, he adds:

Testifying to the fact that man is spirit … with the passing centuries, as polished brutishness mounts, becomes increasingly necessary, but also requires increasingly greater effort.

The Diary of Søren Kierkegaard is a short yet infinitely rewarding read. For a counterpoint to this particular excerpt, see Norman Mailer on the instinct for nonconformity, then revisit Kierkegaard on our greatest source of unhappiness and why anxiety enhances creativity rather than hinders it.