The Holocaust and the Nakba: The Jew as the Arab

Can Jews and Palestinians see each others’ pain? 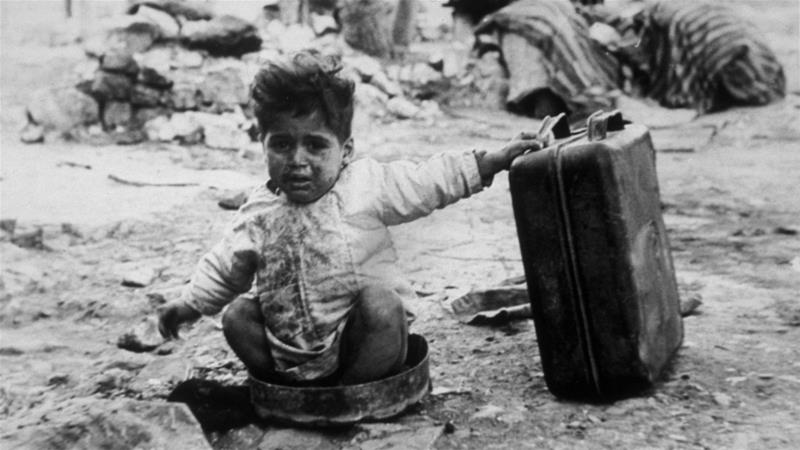 A Palestinian child refugee at a camp in Palestine in November 1948.  [Getty Images]

16 Jun 2019 – Last month Al Jazeera Media Network suspended two journalists over a video that “downplayed and misrepresented the Holocaust”.  The short clip, which was published by AJ+ Arabic, was taken down after the network said in a statement that it had “contravened its editorial standards”.

In an email to staff, Yaser Bishr, executive director of Al Jazeera’s digital division, announced that there will be “a mandatory bias and sensitivity training programme”. Given the resurgence of anti-Semitism, it is indeed important to scrutinise coverage of the Jewish Holocaust and be vigilant.

In this sense, it is commendable that the Doha-based network has taken action. But when it comes to crimes committed by European powers, Al Jazeera is by far not the only one that should be undergoing “sensitivity training”.

Whether it is the transatlantic slave trade, the genocide of native populations in the Americas and Australia, or massacres of varying scales in the Middle East, Asia and Africa, mass atrocities committed by European imperialism and settler colonialism are regularly downplayed and misrepresented. And so are the crimes of other non-European imperial powers.

As racism, white supremacy and sectarianism are on the rise across the world, we indeed need to take care not only to give the Jewish Holocaust immediate and constant attention it needs, but also all other colossal calamities in world history committed in the name of the imagined superiority of one group of humans over the rest.

Can ‘We’ Feel the Pain of Others?

As it happens the incident with the AJ video coincided with a major Holocaust exhibition in New York at the Museum of Jewish Heritage: A Living Memorial to the Holocaust. With more than 700 original items from Auschwitz and 400 photographs, it is the largest ever travelling exhibition about the Nazi death camps.

It is important to have such exhibitions to remind us of the horrors of the Holocaust and the dangers that racist ideologies pose to humanity. But when reflecting on this enormous tragedy, it is difficult to do so in historical isolation, especially from the other tragedy that followed after the end of World War II: the Nakba or the dispossession of the Palestinian people and the systematic theft of their homeland by European settler colonialists.

The Nakba, too, has been downplayed and misrepresented, time and again, in the mainstream media across the world. And beyond that, it is in fact the official policy of the state of Israel to systemically and consistently deny Palestinian suffering. In fact, the whole Israeli settler colony is built on the denial of the very existence of a Palestinian people, let alone their Nakba.

Should the Israelis then not go through “sensitivity training” as well, the way Al Jazeera has decided to do with its staff – both Arab and non-Arab? And what sort of “sensitivity training” would or could ever address or correct that catastrophe? Could the children of European Jews who escaped the Holocaust ever comprehend the pain and suffering of the Palestinians who were uprooted to make space for Zionist settlements?

In Regarding the Pain of Others (2003), American author and philosopher Susan Sontag reflects on how it is impossible for an image of other people’s suffering to convey the horror of the actual events. To make her point, she goes through a series of photographic representations of disasters, Francisco Goya’s The Disasters of War, photographs of the American Civil War, the lynching of African-Americans in the South, the Nazi death camps, the Rwanda genocide, and the attacks in New York City on September 11, 2001.

Sontag rightly warns: “No ‘we’ should be taken for granted when the subject is looking at other people’s pain.” That is, those who have never experienced the pain they are observing in an image or on the TV screen will never fully comprehend it; they will never be a “we” with the person living that pain.

Nevertheless, she argues, it is still important to display images of suffering to society. She writes: “Who are the ‘we’ at whom such shock-pictures are aimed? That ‘we’ would include not just the sympathizers of a smallish nation or a stateless people fighting for its life, but – a far larger constituency – those only nominally concerned about some nasty war taking place in another country. The photographs are a means of making ‘real’ (or ‘more real’) matters that the privileged and the merely safe might prefer to ignore.”

In this sense, how can Jews in and outside Israel and Palestinians come together to form this “we” – to begin to see and sympathise with each other’s pain? An exhibition such as the one in New York could be a great opportunity to have the history of Jewish suffering, that of the Holocaust in particular, re-historicised so Palestinians too could feel the sustained course of their suffering documented and acknowledged.

But is such a curatorial politics even conceivable?

The Jew as the Arab

Indeed, there have been such attempts already. In a recently published volume, The Holocaust and the Nakba: A New Grammar of Trauma and History (2018), edited by Bashir Bashir and Amos Goldberg, a number of leading scholars and critical thinkers reflect on the differences and similarities of the two traumatic events. And it is precisely here where the Jew and the Palestinian can come together.

The point in this volume is not to assimilate these two collective horrors into each other. Rather, the point is the common emotive universe in which Jews and Palestinians can converse from the site of their collective traumas, addressing the suffering and pain of the other.

A cruel history has cast innocent Palestinians and innocent Jews against each other, a false hostile binary manufactured by a history of nasty European colonialism that has culminated and triumphed in the Zionist colonisation of Palestine.

No amount of “sensitivity training” can ever replace the necessity of the Jew and the Arab to see each other’s history of suffering as their own: Close their eyes for one moment and imagine themselves in the shoes of the other.