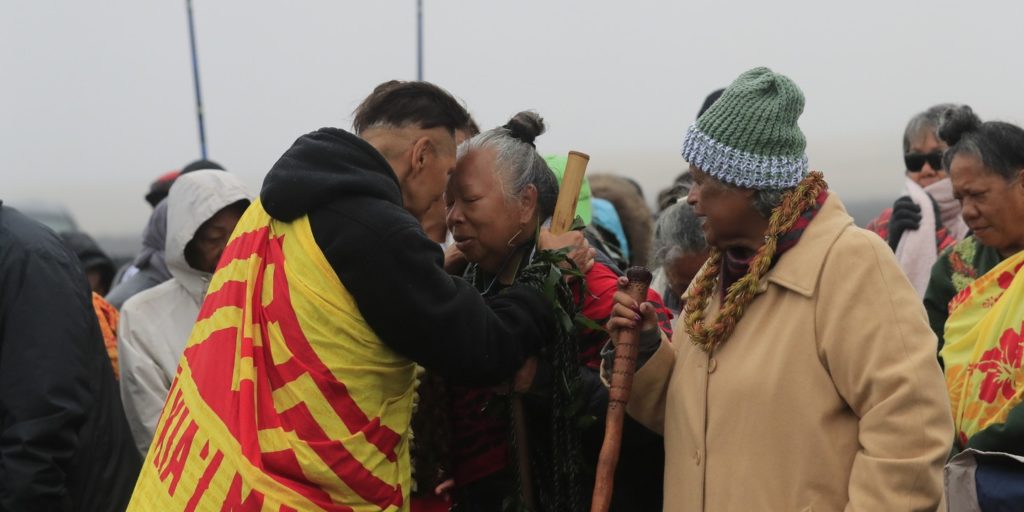 Kumu hula Bradford Ikemanu Lum, left, greets kupuna Noe Noe Wong-Wilson on July 22, 2019, on the seventh day of protests against the TMT telescope at the base of Mauna Kea in Hawaii.
Photo: Jamm Aquino/Honolulu Star-Advertiser via AP

24 Jul 2019 – On July 17, police in riot gear arrested at least 33 Native Hawaiian elders, or kupuna, for peacefully blocking construction of a massive telescope on sacred land on the dormant volcano of Mauna Kea. The arrests came after the kupuna — some of whom use canes or wheelchairs — were blocking the road to the summit. Shortly after the arrests, Hawaii Gov. David Ige signed an emergency order to give law enforcement more authority to remove activists on Mauna Kea, close roads, and ensure delivery of materials to the construction site.

According to a state spokesperson, the activists were released right away and charged with “obstruction of government operations.” Up to 2,000 Native Hawaiians and activists remain camped at the base of Mauna Kea, where they have been for over a week, to prevent the $1.4 billion construction project known as the Thirty Meter Telescope, or TMT, from getting underway. More broadly, they are protesting a history of American colonialism that goes back more than a century and the increasingly militarized police force on the island. The emergency declaration has limited public access to the mountain, but as the protectors gain supporters from outside the state — including statements from presidential candidates and solidarity protests in several states — they say they’re in it for the long haul.

The Native Hawaiian community has been fighting the construction of the telescope in courts and on the ground for about a decade, since plans to build on Mauna Kea were first announced in 2009. On July 10, Ige announced construction would begin the week of July 15, following a four-year delay. The conflict has now reached a tipping point, and the indigenous resistance is drawing comparisons to the Standing Rock Sioux reservation’s fight against the Dakota Access pipeline in North Dakota two years ago.

“What I keep hearing is, ‘It’s just a telescope, it’s not a pipeline’ — no,” said former Hawaii State Rep. Kaniela Ing. “This is an 18-story massive structure that has a footprint of at least six football fields in a county that only allows 6-story buildings. And it’s in a conservation district. So even if — sacredness aside — if you care about the environment at all, this is a really dangerous precedent and our Mauna has already seen oil spills from past telescopes.”

In support of the protests at Mauna Kea, thousands of Hawaii locals and Native Hawaiians march in Waikiki, on the island of Oahu, on July 21, 2019. Photos: Marie Eriel Hobro

The Native Hawaiian Legal Corporation, or NHLC, is suing the governor over the emergency proclamation. They say that Ige’s intent was to enable the construction of the TMT, which has prevented Hawaiians from exercising protected speech rights, including the right to pray at sacred gathering sites.

On July 10, the ACLU of Hawaii issued a letter asking the state’s Department of Land and Natural Resources, or DLNR, and Division of Conservation and Resources Enforcement not to deploy a recently purchased military-oriented weapon, known as a sound cannon, against the TMT protesters.

The Native Hawaiian Legal Corporation says that Hawaiians are being prevented from exercising protected speech rights, including the right to pray at sacred gathering sites.

Though it’s sometimes portrayed as a “communications” device, the long-range acoustic device, or LRAD, is a weapon that has been used by law enforcement to force compliance at protests by causing immense pain and physical damage, including permanent hearing damage.

“Regardless of whether DLNR actually uses LRAD at Mauna Kea, many people very likely will be too afraid to exercise their rights to assemble and protest at all, lest they suffer the same kinds of harms that past LRAD victims have suffered,” the ACLU of Hawaii wrote. “Worse, this chilling effect deters not only protesters, but also journalists, observers, and other bystanders, further showing the indiscriminate, overbroad influence of LRAD.”

Ing, too, pointed out how the state’s actions were limiting the right to protest. “The irony is these kapuna were arrested for not following these American laws by taking space in the road,” the former state representative said. “Then the governor goes ahead and gives himself the authority to skirt basic free speech protections and use excessive force.”

“What the kupuna were charged with was obstructing government operations but this isn’t a government operation — this is a private project,” he continued. “And it’s like, is our government really that controlled by private interests that it doesn’t even recognize the difference itself anymore?”

Support from prominent politicians is pouring in like never before, as candidates running for office express solidarity with the Native Hawaiians. Presidential candidate Sen. Elizabeth Warren voiced support for opponents of the TMT in a tweet on Monday. “The Hawaiians who have been protesting construction of the Thirty Meter Telescope are trying to protect a sacred site from further desecration,” she said. “I stand in solidarity with them.”

In a tweet that has since been deleted, presidential candidate Sen. Bernie Sanders expressed support for the Native Hawaiians protecting Mauna Kea. “We must guarantee native people’s right to self-determination and their right to protest,” he wrote. “I stand with Native Hawaiians who are peacefully demonstrating to protect their sacred mountain of Mauna Kea.” Sanders deleted the tweet without explanation and has not responded to requests for comment from several reporters, including this one.

After a week of silence on the issue, presidential candidate and Hawaii Rep. Tulsi Gabbard released a video statement on Friday urging Ige to withdraw the emergency declaration, delay any new construction, “and bring leaders together from both sides in the spirit of aloha to ho’oponopono and determine the best path forward.”

Some activists have criticized Gabbard on the issue, saying she has largely ignored the longstanding battle over the telescope project, which is happening in her own backyard, while supporting causes in other parts of the country that are in the national spotlight.

Gabbard has largely ignored the longstanding battle over the telescope, while supporting causes in other parts of the country that are in the national spotlight.

Late last week, she reiterated her call for the governor of Puerto Rico to step down amid massive protests on the island, but had not commented on Mauna Kea, even as the movement was growing to its most organized phase yet. And though she hasn’t joined the activists that have been camping out on the mountain, she visited Puerto Rico over the weekend to join the thousands of protesters in the streets.

Similarly, in 2016, the Hawaii congresswoman traveled to North Dakota for the Dakota Access pipeline protests without taking a public stance on Mauna Kea, as the Honolulu Civil Beat reported at the time. She addressed a crowd at an event near the Standing Rock protest camp when someone asked about the proposed construction on sacred land in her home state. “The people there have stood strongly and spoken for the land,” Gabbard said. “That issue, it looks like, has resolved thanks to the position and the stands that they’ve taken.”

Andre Perez, one of the Native Hawaiian activists who was arrested on Mauna Kea the previous year, happened to be in the audience and interrupted Gabbard. “Mauna Kea is not resolved,” he said.

Hawaii Sens. Brian Schatz and Mazie Hirono, however, have maintained some distance. Hirono in a statement last week said she’s concerned for the safety of the protectors who are exercising their constitutional right to peacefully protest, adding that the project “has undergone a significant and thorough regulatory and legal review, and I respect that process.” Schatz had not publicly commented on the issue but told The Intercept on Wednesday that he thinks “it’s good that kind words were exchanged” and there’s going to be an attempt at reconciliation.

“Mayor [Harry] Kim is the right person to facilitate that process because of his long service to the Hawaii Island community and his deep aloha and mutual respect with the Native Hawaiian community,” he added.

Rep. Ed Case, a Democrat from Hawaii, said he supports “the continuation of world-class astronomy on Mauna Kea,” including completion of the TMT. 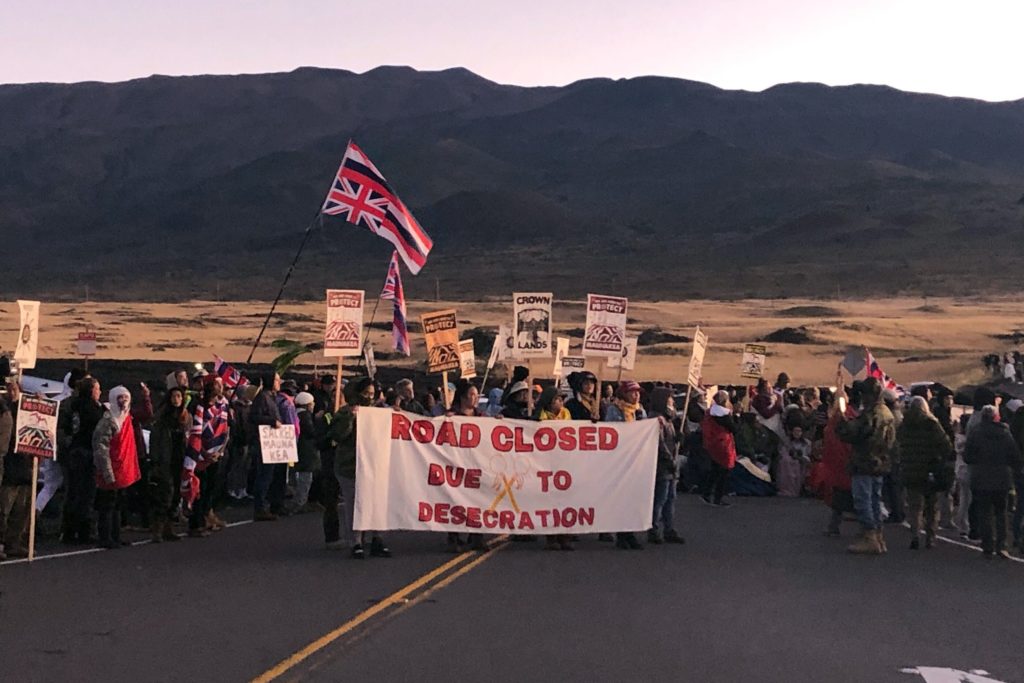 At the sanctuary camp, dubbed Pu’uhonua o Pu’u Huluhulu, the community has set up a free school, public restrooms, food capabilities, and trash is taken down twice a day. Activists describe it as a place of refuge and solidarity, where organizers also sing, dance, and lead chants.

Ing said he has never witnessed anything like what’s presently happening on Mauna Kea before in his lifetime, a sentiment echoed by other activists in the state. The closest thing to this current movement he has seen in Hawaii happened back in 2015, when the Mauna protectors stopped the first attempt of the TMT construction. This time around, he said, the Native Hawaiian community is “more coalesced” and unified.

“When you go up on the Mauna, or just watching videos, you see a type of community that our current form of American capitalism just cannot provide,” Ing added. “No unnecessary hierarchy, there’s order, and just people have their different roles, everyone is playing their position really well, and all labor is visible and appreciated.”