What does it mean when people start to build the society they desire independently of structures of power? 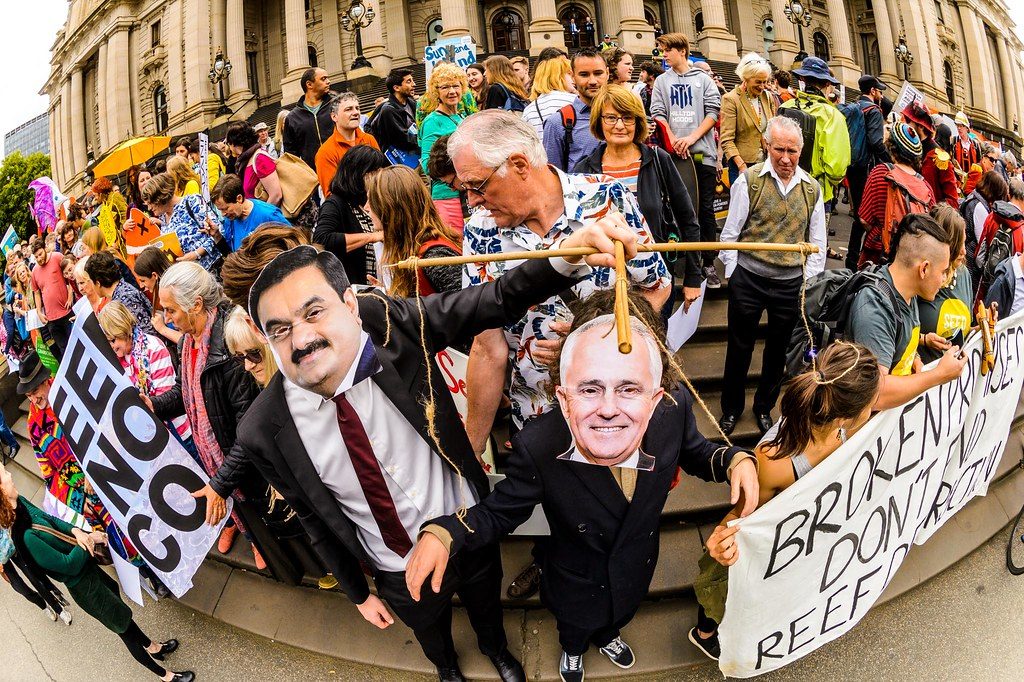 Climate activists at a Reef Not Coal action in Melbourne, Australia in 2016.
(Flickr/John Englart)

29 May 2019 – People living in systems of domination and exploitation resist in many different ways. Some modes of resistance build and experiment with alternatives to the present in various forms, from the small to the large, the hidden to the open. An overall term for these efforts is “constructive resistance,” which covers initiatives in which people start to build the society they desire independently of the dominant structures already in place.

These are initiatives that not only criticize, protest, object, and undermine what is considered undesirable and wrong, but also simultaneously acquire, create, built, cultivate and experiment with what people need in the present moment — or what they would like to see replacing dominant structures or power relations. Within peace and conflict studies, this has been approached through Gandhi’s concept of the constructive program. In the anarchist and Marxists traditions and social movement literature, a related notion is prefigurative politics.

It is possible to study constructive resistance from many different perspectives, such as the level of organization behind them or the areas they cover. Constructive resistance can be carried out by many actors, from individuals, small associations and local communities to national organizations or organized global networks. It covers areas regarding the fulfillment of basic needs, communication, economic concerns and decision making structures. Other possible approaches are whether the alternatives are legal or not, or to what degree people themselves frame their alternatives as resistance. However, I have settled on an approach that focuses on the two elements of “construction” and “resistance.”

Resistance can be either an implicit or explicitly outspoken critique of structures of power upholding the status quo. These structures of power can be the state, corporate power or patriarchy, but is not limited to these. The constructive element can be either concrete or symbolic, and ranges from initiatives that aim to inspire others to actions that partly replace or lead to the collapse of the dominant way of behaving and thinking. Constructive resistance does not exclude conventional forms for protests, boycotts and civil disobedience, but focuses on creating, building, carrying out and experimenting with what is considered desirable.

The definition suggested here does not include anything about “institutions” in the definition, making it possible to include unorganized and individual acts as constructive resistance. Secondly, I think it is an unnecessary limitation to speak about the construction as something that “facilitates” resistance as others have suggested. Creating alternatives can be resistance without having to facilitate anything that looks like more traditional or well-known forms of resistance. This way, I also count as constructive resistance initiatives that remain small and do not advance beyond exemplifying an alternative or providing inspiration for others.

There is no normative aspect of this definition; constructive resistance is not necessarily “good”, and what starts out as constructive resistance might itself result in new forms of domination and exploitation when it grows and expands. Normative criteria are relevant when we decide what types of resistance to support and which topics to spend our time researching, but it should not be applied when establishing an analytical definition of a phenomena.

Both “construction” and “resistance” can be operationalized in different ways. “Construction” can be conceptualized as the actual consequences for the system under attack at the time of evaluation. Such consequences can be more or less severe for the system. In cases where the constructive initiative does not go further than providing inspiration for others to follow or functions as a supplement to the dominant way of doing things it might not be perceived as threatening. However, when it comes to initiatives where part of what is undesired has been replaced, the situation is very different. Ultimately the constructive alternative might become the norm, thus resulting in a complete collapse of the previous dominant structure.

When it comes to judging how much “resistance” there is in an example of constructive resistance, there are several ways of making this assessment. One option is to evaluate resistance in terms of how confrontational it is towards a particular dominant system. This continuum ranges from the hidden and secret, to the discrete, and finally to resistance that is openly declared. Another option is to consider how “forceful” the resistance is, but the challenge then becomes how to decide who is responsible for determining what constitutes force. One possibility is to look at the response from authorities and those who are being “attacked” or undermined in the situation. This creates a continuum ranging from initiatives that might be welcomed, tolerated or ignored, to those which are disrupted and repressed.

Both construction and resistance can also be understood in relation to the size and scale of the initiatives, such as how many people are involved and how long it lasts. None of these options are inherently better than the others; it depends on what aspect of the constructive resistance one is interested in examining more closely. In the full version of this article, two different diagrams that each use two of the continuums suggested above are used to discuss eight different examples of constructive resistance which falls within the definition.

The people performing constructive resistance are not (just) criticising, demanding change or tearing down established structures. While they might be involved in such types of resistance as well, what is highlighted through this concept is the way they create, build or simply acquire something they consider better than the status quo. They imagine that things can be different, they experiment through trial and error, they change practices and norms, and they share their experiences with others.

Not everyone is likely to agree with this definition, and I welcome debates about other ways of defining the concept. The definition used here is much wider than what has previously been included in the discussions about prefigurative politics and constructive program. I think it is important to also include all those who are not interested in criticizing or confronting (whether because of fear, ignorance or because they don’t think it will make a difference), when we talk about constructive resistance. No matter if they think it or not, people are still contributing to resistance as long as they are performing activities that create alternatives to or implicitly undermine established structures of power. Constructive resistance might become more effective if it is designed to confront the status quo and not just bypass it.

On the other hand, it is easier to continue working undisturbed when you are involved in a small-scale non-confrontational supplement rather than openly confronting and explicitly aiming for total collapse of the status quo. The definition of constructive resistance suggested here provide starting points for mapping the terrain of a phenomenon with little theoretical exploration. Hopefully this aspect of resistance studies will be developed further with investigations of even more interesting questions than how to define them. A particularly important aspect will be to look at the relationship between constructive and nonconstructive forms of resistance, and how these can work together to undermine systems of domination.

Majken Jul Sørensen received her doctorate for the thesis “Humorous Political Stunts: Nonviolent Public Challenges to Power” from the University of Wollongong, Australia in 2014. She has been a pioneer in researching humour as a method in nonviolent resistance to oppression and has published dozens of articles and several books, including Humor in Political Activism: Creative Nonviolent Resistance.