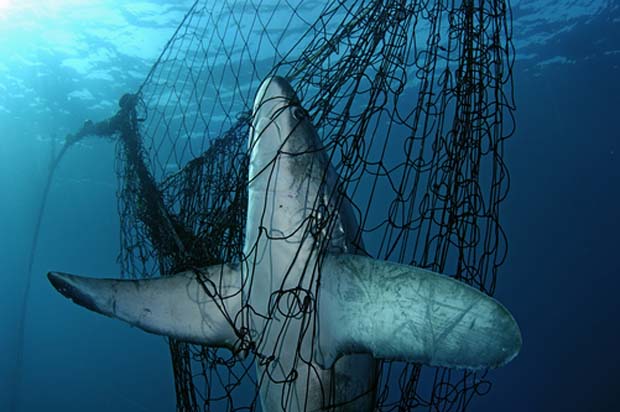 A thresher shark is fatally caught in a fishing net. Fly Life Magazine

5 Jul 2019 – More than a thousand sharks and rays have become entangled in jettisoned fishing gear and plastic debris, a new study has found. The researchers behind the study warn that the plastic trapping the sharks and rays may cause starvation and suffocation.

The research, published in Endangered Species Research by scientists at the University of Exeter, sought to bring light to a problem that is a major animal welfare concern, but has slipped under the radar compared to larger threats like commercial fishing, as a press release published by Science Daily reported. The entanglement causes tremendous suffering in animals that survive it.

“One example in the study is a shortfin mako shark with fishing rope wrapped tightly around it,” said Kristian Parton, of the Centre for Ecology and Conservation on Exeter’s Penryn Campus in Cornwall, as Science Daily reported.

“The shark had clearly continued growing after becoming entangled, so the rope — which was covered in barnacles — had dug into its skin and damaged its spine.”

Most of the entanglements, 74 percent, were due to discarded or lost fishing gear. There were also cases of marine life caught in packing straps, bags and clothing. 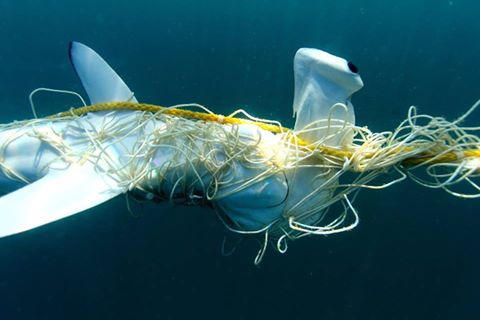 In their research, the scientists pinpointed 1,116 sharks and rays caught in plastic. Yet, they suggest the true number could be higher, especially since examples of certain entangled species, like the whale shark, only existed on social media and not in published studies.

That discrepancy set the researchers on the course of a novel methodology. To understand the scale of the problem, they looked at published reports since 1940 and also looked at reports on Twitter since 2009.

“Our study was the first to use Twitter to gather such data, and our results from the social media site revealed entanglements of species — and in places — not recorded in the academic papers,” said Brendan Godley, a co-author on the study, as Science Daily reported.

The review of academic papers revealed 557 sharks and rays entangled in plastic, spanning 34 species. An almost equal number were found on Twitter — 559 individual sharks and rays from 26 species including whale sharks, great whites and tiger sharks.

The disparity between Twitter and academic research “emphasizes that entanglement is more than likely impacting a significantly greater number of species on a vastly larger scale than this review has presented,” the researchers said, as Sky News reported.

“Entanglement can lead to starvation, suffocation, immobilization and ultimately death, making this unequivocally an animal welfare issue, if not of conservation relevance,” they wrote, as Sky News reported.