In an Astonishing Turn, George Soros and Charles Koch Team Up to End US ‘Forever War’ Policy 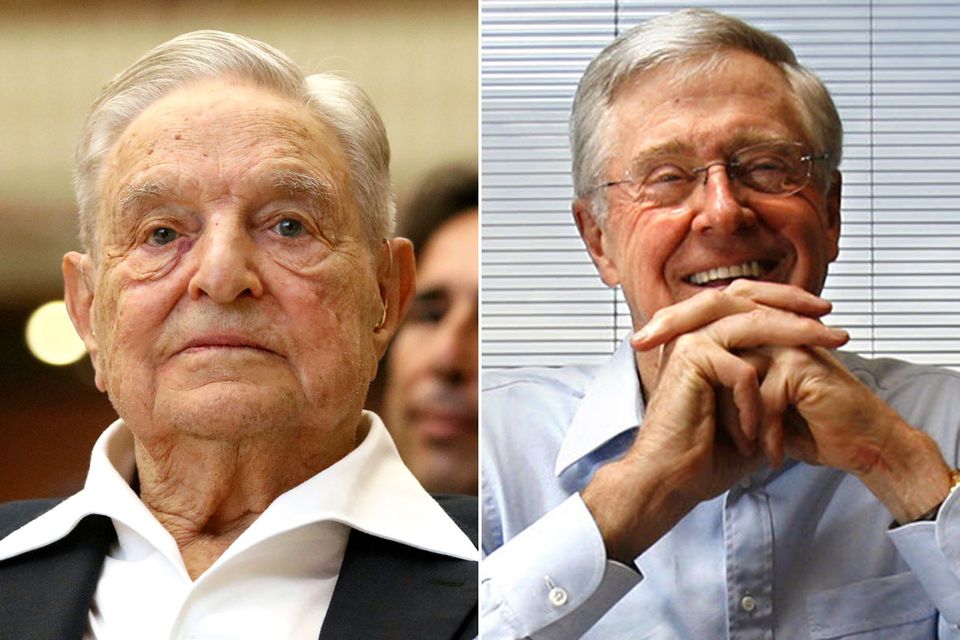 George Soros (left) and Charles Koch are teaming up on the effort.
(Associated Press/File photos)

30 Jun 2019 – Besides being billionaires and spending much of their fortunes to promote pet causes, the leftist financier George Soros and the right-wing Koch brothers have little in common. They could be seen as polar opposites. Soros is an old-fashioned New Deal liberal. The Koch brothers are fire-breathing right-wingers who dream of cutting taxes and dismantling government. Now they have found something to agree on: the United States must end its “forever war” and adopt an entirely new foreign policy.

In one of the most remarkable partnerships in modern American political history, Soros and Charles Koch, the more active of the two brothers, are joining to finance a new foreign-policy think tank in Washington. It will promote an approach to the world based on diplomacy and restraint rather than threats, sanctions, and bombing. This is a radical notion in Washington, where every major think tank promotes some variant of neocon militarism or liberal interventionism. Soros and Koch are uniting to revive the fading vision of a peaceable United States. The street cred they bring from both ends of the political spectrum — along with the money they are providing — will make this new think tank an off-pitch voice for statesmanship amid a Washington chorus that promotes brinksmanship.

“This is big,” said Trita Parsi, former president of the National Iranian American Council and a co-founder of the new think tank. “It shows how important ending endless war is if they’re willing to put aside their differences and get together on this project. We are going to challenge the basis of American foreign policy in a way that has not been done in at least the last quarter-century.”

Since peaceful foreign policy was a founding principle of the United States, it’s appropriate that the name of this think tank harken back to history. It will be called the Quincy Institute for Responsible Statecraft, an homage to John Quincy Adams, who in a seminal speech on Independence Day in 1821 declared that the United States “goes not abroad in search of monsters to destroy. She is the well-wisher to the freedom and independence of all. She is the champion and vindicator only of her own.” The Quincy Institute will promote a foreign policy based on that live-and-let-live principle.

The institute plans to open its doors in September and hold an official inauguration later in the autumn. Its founding donors — Soros’s Open Society Foundation and the Charles Koch Foundation — have each contributed half a million dollars to fund its takeoff. A handful of individual donors have joined to add another $800,000. By next year the institute hopes to have a $3.5 million budget and a staff of policy experts who will churn out material for use in Congress and in public debates. Hiring is underway. Among Parsi’s co-founders are several well-known critics of American foreign policy, including Suzanne DiMaggio, who has spent decades promoting negotiated alternatives to conflict with China, Iran, and North Korea; the historian and essayist Stephen Wertheim; and the anti-militarist author and retired Army colonel Andrew Bacevich.

“The Quincy Institute will invite both progressives and anti-interventionist conservatives to consider a new, less militarized approach to policy,” Bacevich said, when asked why he signed up. “We oppose endless, counterproductive war. We want to restore the pursuit of peace to the nation’s foreign policy agenda.”

In concrete terms, this means the Quincy Institute will likely advocate a withdrawal of American troops from Afghanistan and Syria; a return to the nuclear deal with Iran; less confrontational approaches to Russia and China; an end to regime-change campaigns against Venezuela and Cuba; and sharp reductions in the defense budget.

It aims to issue four reports before the end of 2019: two offering alternative approaches to the Middle East and East Asia, one on “ending endless war,” and one called “democratizing foreign policy.” Its statement of principles asserts that the United States “should engage with the world, and the essence of engagement is peaceful cooperation among peoples. For this reason, the United States must cherish peace and pursue it through the vigorous practice of diplomacy . . . The use of armed force does not represent American engagement in the world. Force ends human life, destroying engagement irreparably. Any resort to force should occur only as a last resort and should remain infrequent. The military exists to defend the people and territory of the United States, not to act as a global police force.”

The depth of this heresy can only be appreciated by recognizing the meretricious power that nourishes Washington’s think-tank ecosystem. These “talk shops” employ experts who pop up to advise politicians, journalists, Congressional staff members, and the public. They write opinion columns and bloviate on news channels. In foreign policy, all major Washington think tanks promote interventionist dogma: the United States faces threats everywhere, it must therefore be present everywhere, and “present” includes maintaining more than 800 foreign military bases and spending trillions of dollars on endless confrontations with foreign countries. That, with some variation, is the ethos that moves conservative think tanks like the American Enterprise Institute and the Heritage Foundation as well as liberal ones like the Center for American Progress and the Brookings Institution. Just as pernicious as their relentless support of the global-hegemony project is the corruption that lies behind it. Many Washington think tanks are supported by industries and foreign powers eager to inflate threats in order shape American law, policy, and public opinion. Their “experts” are often paid shills who cloak themselves in institutional respectability so they can masquerade as independent analysts.

When foreign crises like the war in Yemen break out, critics of US policy emerge and are given space to air their views. These protests, however, are episodic. Little continuity ties one burst of outrage to the next. The Quincy Institute aims to offer a corps of experts in Washington who will promote a unified foreign-policy paradigm based on statecraft and cooperation. Its founders plan to become involved in grass-roots campaigns, especially in minority communities. They hope their specialists will eventually move on to populate Congressional staffs and the executive branch — as alumni of pro-intervention think tanks have been doing for decades.

“Some interesting currents are emerging in American politics and we want to capture this moment, but we’re in it for the long haul,” said Parsi. “We’ll be a failure if in 10 years we’re still criticizing. In 10 years, we want to be driving the bus.”

Correction: An earlier version of this column said the Koch brothers are financing the Quincy Institute. Only one of the brothers, Charles, is backing the think tank.

Stephen Kinzer is a senior fellow at the Watson Institute for International and Public Affairs at Brown University.