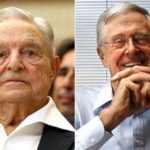 30 Jun 2019 – Besides being billionaires and spending much of their fortunes to promote pet causes, the leftist financier George Soros and the right-wing Koch brothers have little in common. Could a Soros-Koch think tank end “endless war”?

The Media Are Misleading the Public on Syria
Stephen Kinzer – The Boston Globe, 22 Feb 2016

Americans are being told that the virtuous course in Syria is to fight the Assad regime and its Russian and Iranian partners. We are supposed to hope that a righteous coalition of Americans, Turks, Saudis, Kurds, and the “moderate opposition” will win. This is convoluted nonsense. Much blame for this lies with our media.

The pan-European project is waning because of its inherent flaws. The deepest flaw in the EU concept was the fantasy that Europeans would steadily become less nationalistic.

This catastrophe did not “just happen.” It is the direct result of an episode that may at first seem unrelated: the US-led intervention in Libya last year. Rarely in recent times has there been a more vivid example of how such interventions can produce devastating unexpected results.

Does boycotting BP really make sense? Perhaps not. After all, many BP filling stations are actually owned by local people, not the corporation itself. Besides, when you’re filling up at a Shell or ExxonMobil station, it’s hard to feel much sense of moral triumph. Nonetheless, I reserve my right to drive by BP stations. I started doing it long before this year’s oil spill in the Gulf of Mexico. My decision not to give this company my business came after I learned about its role in another kind of “spill” entirely — the destruction of Iran’s democracy more than half a century ago.