2 Jul 2019 – Italian Interior Minister Matteo Salvini said he had hoped for a tougher response from the justice system but promised to expel as soon as possible the captain. 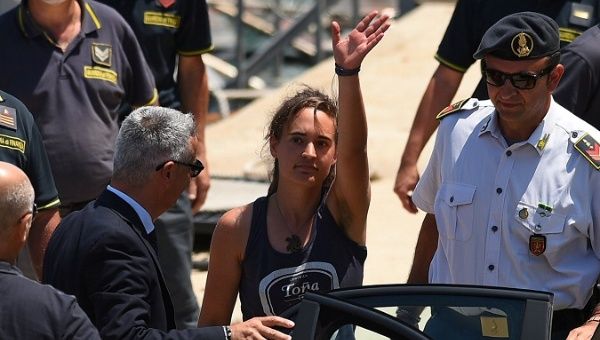 Carola Rackete, the 31-year-old Sea-Watch 3 captain, disembarks from a Finance police boat and is escorted to a car, in Porto Empedocle, Italy July 1, 2019. Photo: Reuters

An Italian judge ruled today that German captain Carola Rackete of a migrant charity ship had not broken the law when she forced a naval blockade at the weekend, saying she had carried out her duty to protect life.

Rackete, a 31-year-old German national, disobeyed Italian military orders and entered the port of Lampedusa on Saturday, hitting a police patrol boat as she brought some 41 African migrants to land in the Sea-Watch rescue vessel.

She was immediately detained and placed under house arrest, but in a blow for Italy’s hardline interior minister, Matteo Salvini, Judge Alessandra Vella ruled that Rackete had been carrying out her duty and had not committed any act of violence.

Salvini said in a statement he had hoped for a tougher response from the Italian justice system and promised to expel Rackete as soon as possible.

The controversy over Rackete’s actions have dented relations between Italy on the one side and Germany and France on the other, and have highlighted Europe’s continued failure to adopt coherent immigration norms.

Rackete appeared before the Agrigento court on Monday and apologized for hitting the patrol boat, saying it had been an accident and explaining that her sole concern was the well-being of the migrants who had been at sea for more than two weeks.

#CarolaRackete, has become a symbol of defiance in Italian media for challenging Interior Minister #MatteoSalvini’s policy of closing ports to NGO ships which he accuses of being complicit with people smugglers. #SeaWatch pic.twitter.com/Ovw9vuCwLx