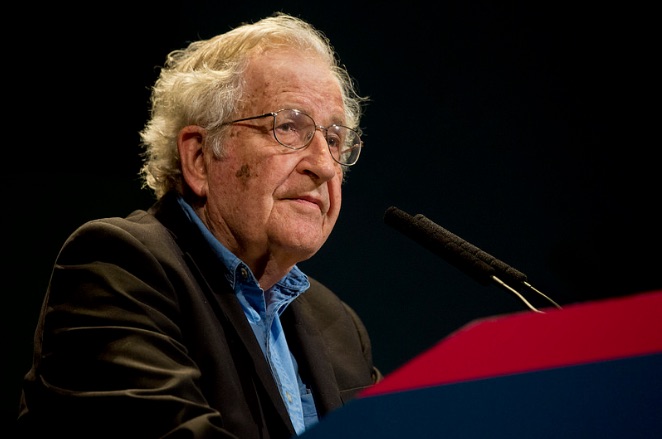 20 Jun 2019 – Noam Chomsky, now 90, has witnessed many technological changes over the years. The leftist academic started his career in the days of 78s and black-and-white films, and he is still keeping busy in an era of digital communications, Twitter, smartphones and YouTube. But the more things change, the more they stay the same — and Chomsky, in an interview for Alan MacLeod’s book, “Propaganda in the Information Age: Still Manufacturing Consent,” asserted that “the propaganda model” is still alive and well in the digital age.

Via Skype, MacLeod interviewed Chomsky for his book on March 13, 2018, and a lightly edited transcript of their conversation has been published on the website of the liberal/progressive media watchdog group Fairness and Accuracy in Reporting (FAIR). The interview came 30 years after Chomsky’s 1988 book, “Manufacturing Consent: The Political Economy of the Mass Media,” which Chomsky co-wrote with Edward S. Herman. The book examined the ways in which mainstream media can serve as government propaganda agencies, and Chomsky asserted during his interview with MacLeod that digital technology hasn’t ended the “propaganda model” he described in 1988.

“I don’t think the Internet and social media changes the propaganda model at all,” Chomsky told MacLeod. “The propaganda model was about the major media institutions, and they remain — with all the social media and everything else — the primary source of news, information and commentary. The news that appears in social media is drawn from them. So, if you look at the news on Facebook, it comes straight from the major media. They don’t do their own investigations.”

Chomsky went on to say that “fundamentally,” the mainstream media are as vulnerable to propaganda in the late 2010s as they were in the 1980s.

“As far as the major media are concerned,” the Philadelphia native told MacLeod, “there is no fundamental difference. In fact, in some ways, they are a little more independent than they were back in the 1980s, partly because of changes in the society — which have opened things up to an extent. But fundamentally, they are the same.”

One change in the digital age, Chomsky noted, is that Americans have an easier time staying in political “bubbles.”

“People tend to go to things that just reinforce their own opinions,” Chomsky explained. “So, you end up with bubbles. And it is all across the spectrum. The people on what is called the left see the left media, the people on the right see the right media. And the level of material is, of course, much more shallow.”

Chomsky observed that in the late 2010s, the major dailies that were around in the 1980s still aren’t offering a broad range of views.

“If you read the New York Times — which, incidentally, young people did not read much in the 1980s, either — but if you read the New York Times or the Washington Post, or even if you watch television news, you get a certain range of opinion: not very broad,” Chomsky asserted. “It goes from center to far-right, but at least there is some discussion. And occasionally, you get a critical voice here and there.”

Avram Noam Chomsky is an American linguist, philosopher, cognitive scientist, historian, logician, social critic, and political activist. Sometimes described as “the father of modern linguistics,” Chomsky is also a major figure in analytic philosophy, and one of the founders of the field of cognitive science. He has spent more than half a century at the Massachusetts Institute of Technology (MIT), where he is Institute Professor Emeritus, and is the author of over 100 books on topics such as linguistics, war, politics, mass media, US foreign policy, social issues, Latin American and European history, and more. noamchomsky@​email.arizona.edu