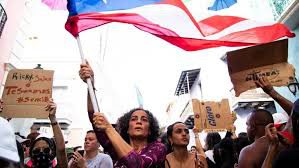 25 Jul 2019 – After two weeks of protests demanding his removal, Puerto Rico Governor Ricardo Rosselló announced his resignation late last night. In a statement posted online, Rosselló said he would step down on August 2. The announcement was met with cheers by thousands of protesters who gathered outside the governor’s La Fortaleza (The Fortress) residence in the Old San Juan district of the Caribbean island’s capital.

Popular anger has been escalating since the release two weeks ago of private text messages between Rosselló and his inner circle, which mocked the victims of Hurricane Maria and draconian austerity measures imposed by the US federal government’s Fiscal Oversight Board. The protests reached their highpoint Monday with the largest demonstration in the history of the US territory. Between 500,000 and 1 million people participated in the huge procession in San Juan, a substantial portion of the island’s 3.2 million inhabitants.

Analysts suggested that Rosselló spent much of his last day seeking to work out a deal over obtaining a pardon if he is convicted on corruption charges. On Wednesday, attorneys commissioned by the president of Puerto Rico’s House of Representatives, Carlos Méndez Núñez, a member of Rosselló’s own New Progressive Party (NPP), found five offenses that constitute grounds for impeachment, including the embezzlement of public funds and neglect of his official duties. The state legislature announced it would convene a special session Thursday to begin impeachment proceedings if the governor did not resign.

Because Puerto Rico’s US colonial constitution does not include any provision for a special election, the governorship is being handed over to one of his cabinet officials, Secretary of Justice Wanda Vázquez, a fellow NPP member who has also been embroiled in various charges of unethical behavior.

In November 2018, the Office of the Independent Prosecutor accused her of improperly intervening on behalf of her daughter and son-in-law amidst a housing dispute, making her the first secretary of justice in Puerto Rico’s history to face criminal charges. She was eventually cleared of ethical charges by a judge in a case where Vazquez’s husband, Superior Court Jorge Diaz Reveron, was questioned for allegedly intervening with a potential witness in the failed case.

One of Vázquez’s close allies, Valerie Rodríguez Erazo, the wife of Elías Sánchez, is a “lobbyist” and close friend of Rosselló. According to a July 19 exposé by the Center for Investigative Journalism, Sánchez, who came up with the ranks of the NPP youth movement with Rosselló, helped direct government contracts, including for hurricane relief, to his favored clients, charging them commissions of up to 25 percent of the amount of the contracts and fixed retainers that have reached $50,000 per month.

Like rats jumping off a sinking ship, several high-ranking officials have resigned over the last few weeks, including the governor’s chief of staff who quit Tuesday night. Just days before cabinet officials who previously resigned, Julia Keleher, the former secretary of education, and Angela Avila-Marrero, former head of the health insurance administration, were arrested by the FBI on charges that they inflated contracts and steered them to favored firms.

While Trump and Democratic Party presidential candidates distanced themselves from Rosselló, the forced resignation of the MIT-trained politician by a mass movement encompassing large sections of the working class sent paroxysms of fear throughout the entire US political establishment. With no means of expressing their opposition to the looting of society by the corporate and financial elite, masses of workers and young people took to the streets to express their democratic will and social aspirations.

If Rosselló could be removed through such mass action, so could Trump. The last thing the Democrats want is for the events in Puerto Rico to inspire similar action on the US mainland that would threaten the capitalist economic and political order, which the Democrats no less than Trump and the Republicans defend.

As rotten and corrupt as the island’s political establishment is, they are considered petty thieves compared to the Wall Street bondholders and their financial hatchet men who sit on the Fiscal Oversight Board, appointed by President Obama in 2016. Hedge funds like GoldenTree and Baupost Group, the Boston-based hedge fund helmed by billionaire Seth Klarman, hold more than $50 billion in bonds and want to assure that they recover as much of their speculative investments as possible through the gutting of pensions and selloff of public assets like the island’s electrical utility and public school system.

To a certain extent, the social explosion is seen by the political establishment in Puerto Rico as an obstacle to the wholesale looting of the island by major hedge funds. The Fiscal Oversight Board still requires the agreement of the island’s legislature to pass bills to implement the US federal bankruptcy court’s debt-cutting plans.

Earlier this month, the financial overseers struck a deal with creditors, which will include cuts to the pension benefits of 300,000 public sector workers, retirees and their families, many of whom do not qualify for Social Security. Current employees will be shifted into individual retirement accounts tied to the stock market. Puerto Rican teachers voted against the deal, even though the American Federation of Teachers had urged a “yes” vote. Retired teachers will vote after the restructuring plan is introduced in the federal bankruptcy court.

The bondholders are completely unsatisfied and are demanding even more. Over the last several days the Washington Post, Wall Street Journal and other leading corporate media outlets have expressed the far-fetched hope that the further discrediting of the island’s political establishment would strengthen the hand of the federal bankruptcy court and Fiscal Oversight Board—known on the island as the “La Junta”—making it easier to beat back the resistance of workers to draconian austerity measures.

Last week the Washington Post editorial board complained that the fiscal board’s “effectiveness has been hampered” and that “Congress should take steps to strengthen the board,” including granting it the power to veto measures passed by Puerto Rico’s legislature.

Commenting on the mass protests, Bloomberg News wrote, “The turmoil came just as a federal court judge Wednesday held a hearing in the bankruptcy case that was overshadowed by the administration’s dysfunction, which could create an opening for a federal oversight board to consolidate power and impose deeper budget-cutting measures as part of the more than two-year-old bankruptcy. The political crisis and corruption probes surrounding the administration may undermine opposition to such cuts by strengthening the view that the government is inefficiently run and rife with overspending, potentially freeing up more money for creditors.”

The Oversight Board is “facing a weak government,” Vicente Feliciano, president of Advantage Business Consulting, told the industry publication Bond Buyer. “Thus, it could impose its will as long as it stays within reasonable bounds.” Evercore Director of Municipal Research Howard Cure added, “With the taint surrounding the administration, the board may now feel emboldened to make more unilateral decisions and hope they get the cooperation of the bankruptcy court judge [who] might be less sympathetic to the administration.”

In a statement dripping with hypocrisy, the oversight board released a statement responding to the mass demonstrations, saying, “The people of Puerto Rico deserve a well-functioning, responsive, sustainable government that operates with integrity and transparency.” The statement added that the board hoped that the “political process swiftly resolves the current governance crisis.”

The masses who have taken to the streets, however, are in no mood to accept the dictates of Wall Street. Among the most popular chants are “¡Ricky renuncia y llévate a la junta!” or “Ricky resign and take la junta with you!”

The same financial vultures that are looting Puerto Rico have done the same to Argentina and other countries, along with Detroit and other cities on the mainland US. Financiers have expressed the hope that the bankruptcy restructuring of Puerto Rico will set the precedent for allowing the use of the federal courts to gut public pensions in cash-strapped US states.

The only way the working class in Puerto Rico can break the dictatorial grip of Wall Street is through uniting with workers on the mainland and internationally in common struggle.