Response to the Report on Venezuela by the High Commissioner of the UN Human Rights Council, Michelle Bachelet

8 Jul 2019 – The International Committee for Peace, Justice and Dignity, strongly rejects the Report on Venezuela presented on 5 July by the High Commissioner of the UN Human Rights Council, Michelle Bachelet.

The Report lies outrageously about the reality of Venezuela, using the same narrative used over and over again by the U.S. government in condemning and disqualifying the legitimate government of President Nicolas Maduro.

It shamefully omits the criminal character of Venezuelan mercenaries like Leopoldo López, who in 2017, before the eyes of the world, encouraged hate crimes by paying local marginal groups to assault and destroy children hospitals, food stores and pharmacies, and burned humble young people alive simply for being Chavistas. 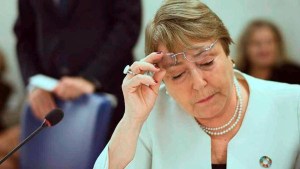 The Report says nothing about the attempted assassination of President Maduro in August 2018, financed by the United States and carried out by a mercenary and stateless opposition. Nor does it mention the ignoring of institutions and the violation of democracy with the pathetic Juan Guaidó, who proclaimed himself “president in charge” following instructions from the White House. Not a word about the violation of the Vienna Convention in the protection of the embassies when the pit dogs of Trump, Pompeo and Bolton, allowed an illegitimate ambassador take over the Venezuelan embassy in Washington after a protracted and heroic sit in by supportive U.S. friends who were harassed by right wing Venezuelans living in the U.S. and then 4 of them were arrested by Federal and DC Police.

Bachelet’s report lacks the truth when it minimizes the titanic effort of Venezuela’s revolutionary government in protecting the rights to food, education, housing, and health care for its people. It is offensive and grotesque for the Report to say that Venezuelan women have to trade sex for food.

It is outrageous that she does not mention the brutal interference of the United States in trying to destroy the Bolivarian Revolution and imposing a government subordinate to the interests of the empire. It does not condemn the sustained threat of military intervention, the clarion call to members of the military to defect from the Bolivarian National Armed Force, the all-out economic war, the blockade, and the looting and theft of the financial resources of the Venezuelan state.

There is not one word in the entire report that condemns the sanctions imposed by the U.S. that came into effect in April against the state-owned company Petroleos de Venezuela, PDVSA, directly attacking the country’s main economic resource and violating international law by the extraterritorial punishment against countries trying to buy oil from Venezuela.

The U.S. blockade is the main cause of the suffering of the Venezuelan people. Donald Trump and his hawks are the main violators of human rights but hardly a word about that in the Report.

On May 23, following the death of six-year-old Venezuelan Giovanni Figuera, the International Committee for Peace, Justice and Dignity launched a letter campaign to Mrs. Bachelet and the Secretary General of the UN calling for the intervention of the High Commissioner to put an end to the US blockade that is keeping lifesaving medicines out. Days later, seven-year-old Roberto Redondo also died.

It’s been two months and we’re still waiting for an answer.

The names of little Giovanni and Roberto deserved a place in the Report, a mention that mitigates the pain of their families and their people, a line of condemnation for denying the resources provided by the Venezuelan government for the operation of bone marrow transplants to children with leukemia who could not be operated on because of the criminal blockade of the United States.

The Report not only manipulates and denies the truth, it omits the evidence and considerations provided by the government, it makes the victims of the guarimbas and all those who are suffering the consequences of the US blockade invisible and it doesn’t condemn the sabotage that left the people without electricity and water for almost a week.

Mrs. Bachalet is a Latin American woman, a doctor and was president of Chile where the police murdered a 14-year-old student for demonstrating for a better education. A country in which the rights of the Mapuche people are violated on a daily basis, where all the crimes against humanity perpetrated by the dictatorship have not been judged and condemned, where workers and miners are brutally exploited.

We wonder where the memory of her father murdered by Pinochet’s dictatorship has gone. Where is the objectivity, impartiality, the ethics and truth in this report?

Would this be a gift to the magnate who occupies the White House for July 4?

It is extremely serious that the Bachelet Report does not contribute to the dialogue for peace, instead it tilts the scales in favor of the aggressor while ignoring the damage the Empire has done to the people. We call on all to ignore, repudiate and denounce the political, unilateral, untruthful, offensive and irresponsible bias of the Bachelet Report on Venezuela.

It is not Venezuela that is hurt the most by this Report, The greatest damage is to the credibility of the UN itself. We have to think again about what Father Miguel D Escoto, who had all the ethics and political courage that Mrs. Bachelet lacks, when he told us: “The UN must be refounded“

We are a network of concerned individuals from several countries of Europe, Latin America and North America who are dedicated to help defend the sovereignty of developing nations. We also support the just struggles of the peoples of the world, from Latin America and the Caribbean to the Middle East.