26 Jul 2019 – Once President Trump signs the budget deal that was passed by the House yesterday and is expected to be approved by the Senate in a few days, he will have added $4.1 trillion to the national debt, according to the Committee for a Responsible Federal Budget. The total national debt surpassed $22 trillion in February.

This will mark the third time that a major piece of deficit-financed legislation will get Trump’s stamp of approval. Legislation Trump has so far signed since 2017 has added $2.4 trillion to the national debt through 2029, according to CRFB, a nonpartisan public policy group.

The biggest contributor to the $4.1 trillion that will be added to the national debt through 2029 is the Tax Cuts and Jobs Act. This signature tax cut legislation signed by Trump in 2017 single-handedly increased the debt by $1.8 trillion, according to CRFB. 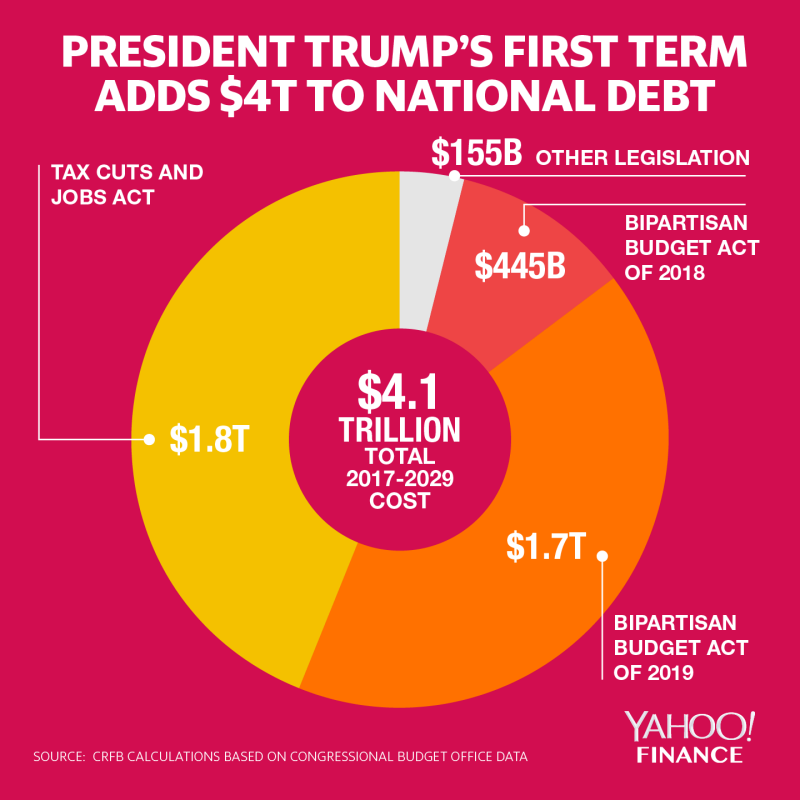 President Trump is adding $4 trillion to the national debt

“If you were to extend all the expiring provisions from the Tax Cuts and Jobs Act, it would be about a trillion more on top of that, so it’s hugely expensive,” says CRFB’s senior vice president Marc Goldwein. “Some of this is done on a partisan basis, some of this is done on a bipartisan basis. But it’s all part of a culture of no longer worrying about how we’re going to pay for things and just assuming that future generations are going to cover the bill.”

The budget deal that was passed last year added $445 billion to the national debt. And when he signs the 2019 Bipartisan Budget Act after it goes to the Senate next week, Trump will make spending increases in the legislation permanent, growing the national debt by $1.7 trillion through 2029.

The remaining $155 billion of debt added during Trump’s first term comes from other legislation, including disaster relief, emergency spending bills, and delays in three Affordable Care Act taxes, according to CRFB.

U.S. GDP growth fell to 2.1% in the second quarter. CRFB estimates that the new budget deal will bring debt to 97% of GDP in 2029 once that $4.1 trillion figure is added to the existing $16.2 trillion in debt and $9.8 trillion projected to be borrowed over the next 10 years.

“We are the most powerful economy in the world and we’re the world’s reserve currency and we borrow at our own currency. And for those three reasons we’re not going to default on our debt, but that doesn’t mean that we can borrow without consequences,” says Goldwein.

The ballooning national debt will cause GDP growth to slow down further, he says. “The more we borrow, the more we have to count on capital from abroad, or else no capital at all to fund our investments and the slower growth is going to be over time. We’re already headed towards 2% growth on the current basis, and the higher our debt is, the lower that will be.”

Sibile Marcellus is an on-air reporter covering the day’s top stories in business for Yahoo Finance‘s three daily live shows. She previously worked for FOX TV‘s Chasing News as an on-air personality where she covered politics and entertainment.