Waste Only: How the Plastics Industry Is Fighting to Keep Polluting the World 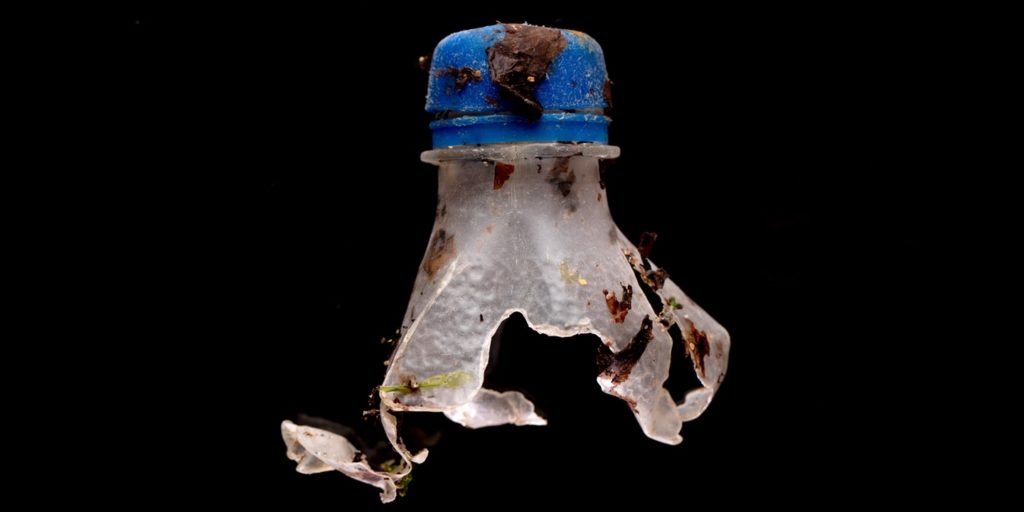 A portion of plastic bottle found on Mothecombe Beach at the mouth of the Erme Estuary in South Devon, England, on May 30, 2019.
Photo: Dan Kitwood/Getty Images

20 Jul 2019 – The students at Westmeade Elementary School worked hard on their dragon. And it paid off. The plastic bag receptacle that the kids painted green and outfitted with triangular white teeth and a “feed me” sign won the students from the Nashville suburb first place in a recycling box decorating contest. The idea, as Westmeade’s proud principal told a local TV news show, was to help the environment. But the real story behind the dragon — as with much of the escalating war over plastic waste — is more complicated.

The contest was sponsored by A Bag’s Life, a recycling promotion and education effort of the American Progressive Bag Alliance, a lobbying group that fights restrictions on plastic. That organization is part of the Plastics Industry Association, a trade group that includes Shell Polymers, LyondellBasell, Exxon Mobil, Chevron Phillips, DowDuPont, and Novolex — all of which profit hugely from the continued production of plastics. And even as A Bag’s Life was encouraging kids to spread the uplifting message of cleaning up plastic waste, its parent organization, the American Progressive Bag Alliance, was backing a state bill that would strip Tennesseans of their ability to address the plastics crisis. The legislation would make it illegal for local governments to ban or restrict bags and other single-use plastic products — one of the few things shown to actually reduce plastic waste.

A week after Westmeade’s dragon won the contest, the APBA got its own reward: The plastic preemption bill passed the Tennessee state legislature. Weeks later, the governor signed it into law, throwing a wrench into an effort underway in Memphis to charge a fee for plastic bags. Meanwhile, A Bag’s Life gave the Westmeade kids who worked on the bag monster a $100 gift card to use “as they please.” And with that, a minuscule fraction of its vast wealth, the plastics industry applied a green veneer to its increasingly bitter and desperate fight to keep profiting from a product that is polluting the world. 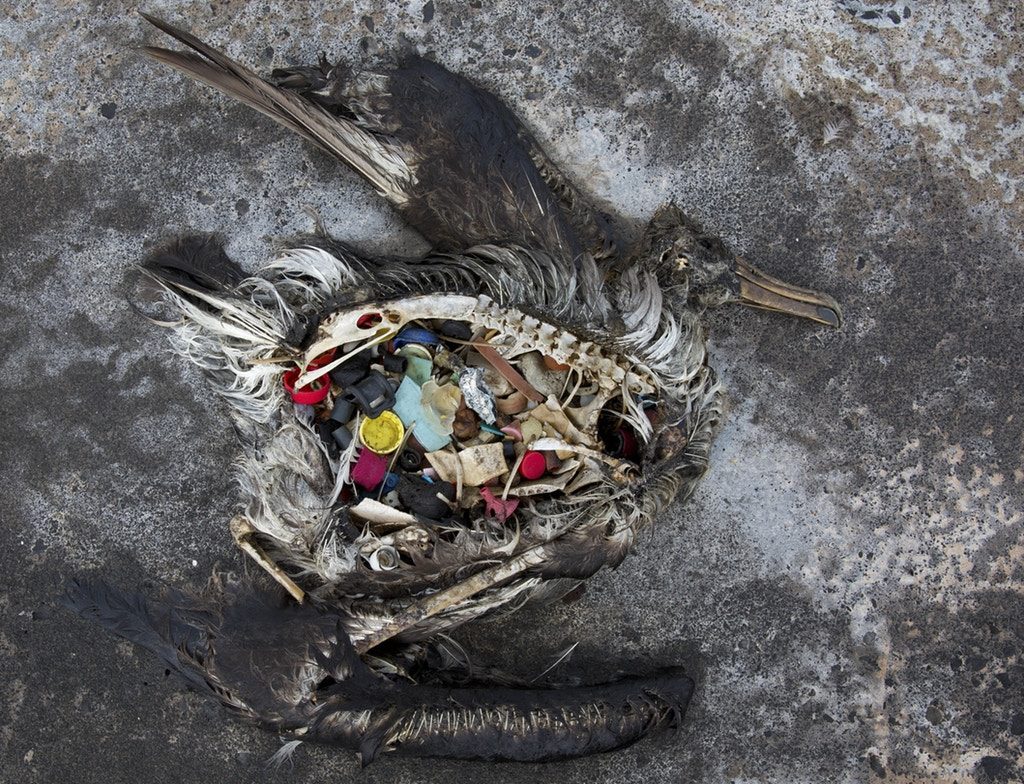 In this photo provided by the U.S. Fish and Wildlife Service, a black footed albatross chick with plastics in its stomach lies dead on Midway Atoll in the Northwestern Hawaiian Islands on Nov. 2, 2014.
Photo: Dan Clark/USFWS via AP

A Bag’s Life is just one small part of a massive, industry-led effort now underway to suppress meaningful efforts to reduce plastic waste while keeping the idea of recycling alive. The reality of plastics recycling? It’s pretty much already dead. In 2015, the U.S. recycled about 9 percent of its plastic waste, and since then the number has dropped even lower. The vast majority of the 8.3 billion metric tons of plastic ever produced — 79 percent — has ended up in landfills or scattered all around the world. And as for those plastic shopping bags the kids were hoping to contain: Less than 1 percent of the tens of billions of plastic bags used in the U.S. each year are recycled.

This is not to say that we shouldn’t try to properly dispose of the array of toys, single-use clamshells, bottles, bags, takeout containers, iced coffee cups, straws, sachets, yogurt tubs, pouches, candy bar wrappers, utensils, chip bags, toiletry tubes, electronics, and lids for everything that passes through our lives daily. We have to. But we are well past the point where the heartfelt efforts of schoolchildren or anyone else on the consumer end can solve the plastics problem. It no longer matters how many hoots we give. There is already way too much plastic that won’t decompose and ultimately has nowhere to go, whether it’s mashed into a dragon container or not. 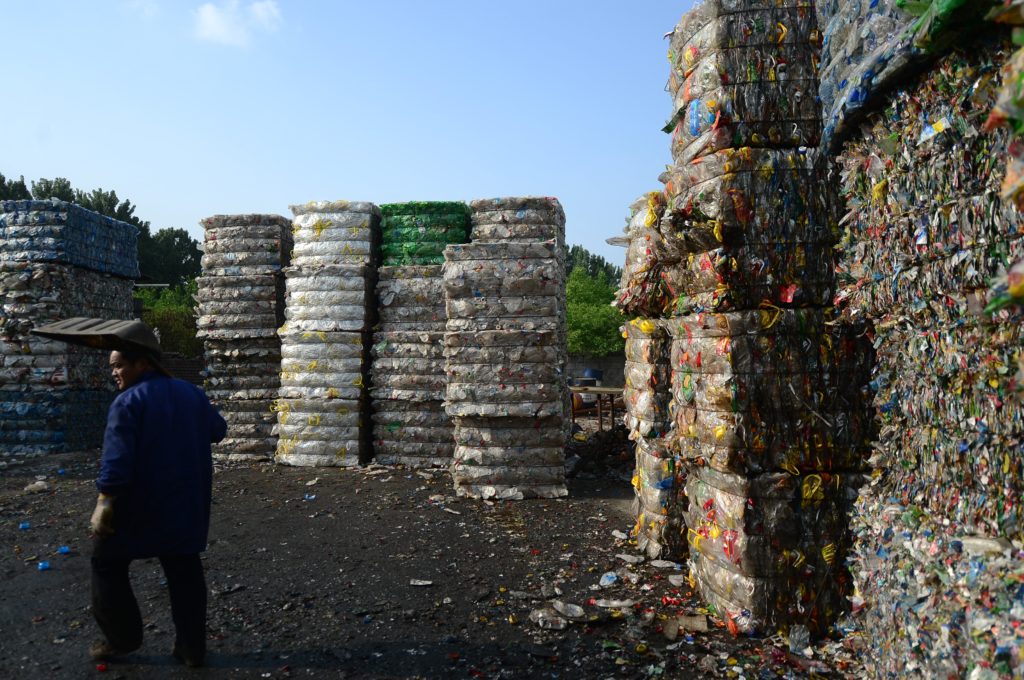 A Chinese worker walks past piles of plastic bottles at a plastic bottle recycling station in Ji’nan city, in east China’s Shandong province, on May 4, 2017.
Photo: Imaginechina via AP Images

China’s decision in 2017 to stop receiving the vast majority of plastic waste from other countries blew the flimsy lid off our dysfunctional recycling system. That year, when the Chinese government announced the National Sword policy, as it’s called, the U.S. sent 931 million kilograms of plastic waste to China and Hong Kong. The U.S. has been offloading vast bundles of scrap this way since at least 1994, when the Environmental Protection Agency began tracking plastics exports. The practice has served to both mask the mounting crisis and absolve U.S. consumers of guilt. But in fact, much of the “recycled” plastic scrap that the U.S. sent to China appears to have been burned or buried instead of being refashioned into new products.

Although China’s turnabout made the failure of the plastics recycling system suddenly and undeniably obvious, in truth the plastics problem has been with us as long as plastic has. Over the decades, as production has grown exponentially, we’ve never managed to repurpose even one-tenth of our plastic waste. Since the EPA began tracking plastics recycling in 1994, when the U.S. recycled less than 5 percent, the rate went up only about 5 percent, peaking at 9.5 percent in 2014. Although there is no data before 1994, the rate was almost certainly even lower then. Some of that failure can be blamed on careless consumers, but much of the waste that is dutifully put into recycling bins and bags also gets landfilled and burned because there’s no market for it.

Much of the “recycled” plastic scrap that the U.S. sent to China appears to have been burned or buried instead of being refashioned into new products.

The plastics problem has been growing exponentially for decades. In 1967, when Dustin Hoffman’s character in “The Graduate” was being advised to go into plastics, less than 25 million tons were produced each year. Even back then, the companies that made the plastic were already aware of the growing waste problem. Yet by 1980, production had doubled. Ten years later, it doubled again to 100 million tons, surpassing the amount of steel produced globally. Today, the plastics industry, estimated to be worth more than $4 trillion, generates more than 300 million tons of plastic a year according to the most recent records — nearly half of which is for single-use items, meaning that it will almost instantly become trash.

With the institution of China’s new policy in January 2018, the extent of the plastic waste crisis became dramatically more visible. Around the world, bales of used plastic that just a year earlier would have been destined for China began piling up. In the U.S., some cities have stopped their plastics recycling programs altogether.

Without good alternatives, the U.S. is now burning six times the amount of plastic it’s recycling — even though the incineration process releases cancer-causing pollutants into the air and creates toxic ash, which also needs to be disposed of somewhere. And poor people are stuck with the worst consequences of the plastics crisis. Eight out of 10 incinerators in the U.S. are in communities that are either poorer or have fewer white people than the rest of the country, and residents living near them are exposed to the toxic air pollution their combustion produces.

Globally, too, the problem is being dumped on the less fortunate and less powerful. Because the U.S. can no longer ship its plastic waste to China, much of that waste is going to Turkey, Senegal, and other countries that are ill-equipped to deal with it. In May, the most recent month for which data is available, the U.S. sent 64.9 million kilograms of plastic scrap to 58 countries. Thailand, India, and Indonesia — where more than 80 percent of waste is mismanaged, according to data published in Science — are among the countries that now find themselves besieged with U.S. plastic that’s being illegally dumped and burned. 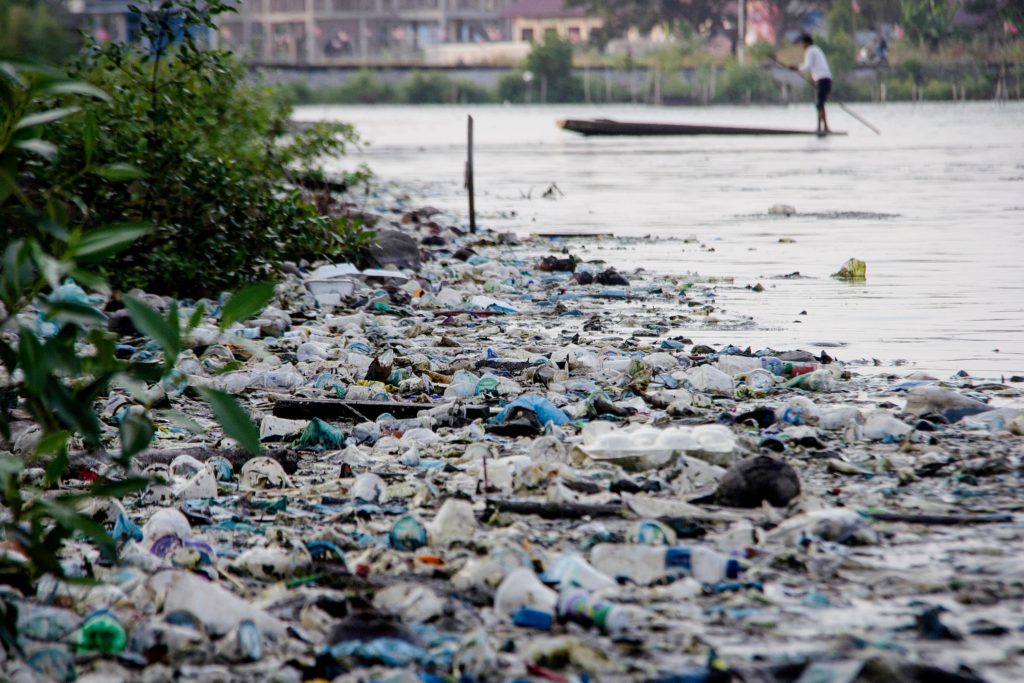 All the Plastics in the Seas: